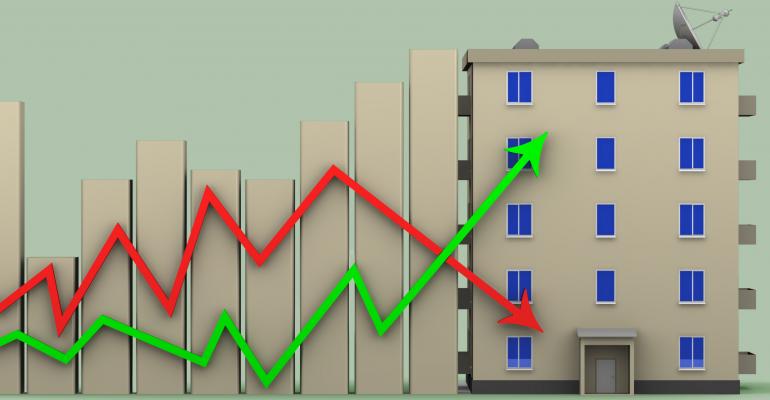 Apartments Rents Are Growing the Most in Former Housing Crash Cities

Today, no major metro areas have annual rent growth of more than 10 percent.

Apartment rents continue to grow more slowly than before. The cities where rents grew the most in 2016 are still top cities for rent growth this year, but their lead is getting smaller.

“A year ago there was a pretty big spread between Houston, which had rent growth of about 1 percent, and Sacramento, which was much larger –nearly 12 percent,” says Jay Denton, senior vice president with data firm Axiometrics.

Today, no major metro areas have annual rent growth of more than 10 percent. Rents are still growing the most in markets with new jobs and relatively few new apartments. Many of those markets are cities and towns that were hit hard by the housing crash. These are often places that have been growing in population. In addition, apartment developers have built relatively few new units in housing crash cities like Sacramento, Calif., and Las Vegas, creating less competition for apartment properties.

Rents grew just 2.2 percent on average in the U.S. over the 12 months that ended in the third quarter, according to a survey of 121 markets by research firm Yardi Matrix. That’s the slowest rate of increase since April 2011.

However, rents are still growing on average. “We don’t believe it’s time to turn out the lights on the expansion in the multifamily sector,” according to Yardi. “Job growth and social and demographic trends foretell strong demand for the next few years.”

Meanwhile, the markets where rents grew the most quickly 2016 have slowed down the most in rent growth in 2017. For example, Sacramento still boasts the strongest rent growth in the United States. But its lead is shrinking. Apartment rents in Sacramento grew by 6.9 percent over the 12 months that ended in the third quarter 2017, according to Axiometrics. During the same period a year before rents rose by nearly 12 percent.

Part of the reason for the limited rent growth in Sacramento is that while the city’s population is growing quickly, much of the net migration is from immigrants who are taking relatively low-wage jobs. “You see service workers. Their salary and wages are quite low, but they are renting,” says Douglas Ressler, director of business intelligence for Yardi Matrix. These workers are not able to pay double-digit rent increases year after year. Sacramento also benefits from an influx of people priced out of the San Francisco Bay Area.

Yet the high rents in Sacramento are also supported by the relative lack of new construction. Until recently, developers had built relatively few new apartment communities in Sacramento. Developers built a huge number of new homes there during the housing boom, which took years to be absorbed after the crash. “Because of the oversupply of housing, some of the hottest markets in the last real estate cycle took the longest to recover,” says Denton.

Another housing crash city, Las Vegas, experienced the second fastest growth in apartment rents. Apartment rents in Vegas grew by 5.8 percent over the 12 months that ended in the third quarter 2017, according to Axiometrics. “Las Vegas had a longer, deeper downturn than the rest of the real estate market,” says Denton. “It is just at a different place in its real estate cycle. Other markets have had a lot of construction.”

Developers have finally begun to put new product on the market—3,500 new apartments will open in 2017, according to Axiometrics. These new apartments are already slowing down the pace of rent growth in the city. However, the apartment market in Las Vegas is likely to remain healthy. In 2018 developers will only open 1,700 new apartments, while the city is creating about 30,000 new jobs a year.

The rest of the list of markets where rents are growing the most quickly is crowded with cities that suffered deeply in the housing crash. Orlando, Fla., is number three on the list. Average apartment rents grew by 4.8 percent there over the 12 months that ended in the third quarter, according to Axiometrics. San Diego is number five, with rent growth of 4.5 percent.  Jacksonville, Fla., is number six, with rent growth of 4.4 percent.