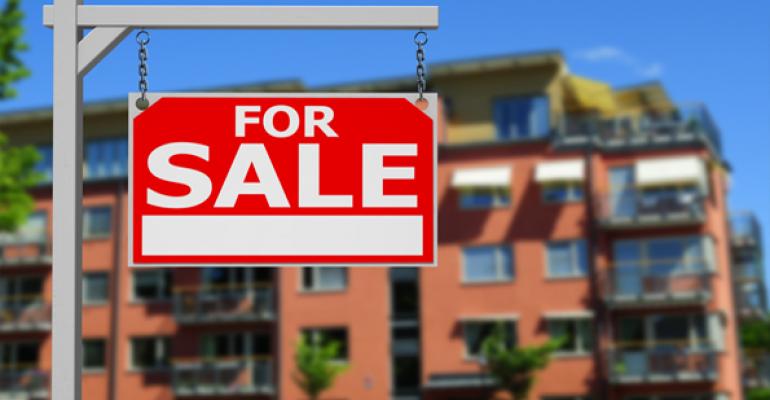 Far fewer deals closed in the apartment sector in both January and February compared to the year before. Buyers increasingly want higher yields on their investments.

The new year has brought some surprises for the apartment business. Investors are buying and selling far fewer apartment buildings.

Far fewer deals closed in the apartment sector in both January and February compared to the year before. Buyers increasingly want higher yields on their investments. Sellers still insist on the high prices they believe their properties are worth and many are willing to refuse to sell rather than accept a lower bid. Meanwhile, at least a few investors are still willing to pay those high prices, which continue to rise on average for the shrinking number of deals that make it to the closing table.

“The situation suggests an impasse between buyers and sellers,” says Costello.

Apartment investors bought and sold $5.1 billion in apartment properties in January 201—down 62 percent from the year-ago period. The volume of apartment deals normally swings widely, but there are signs that this single month may be a sign of a broader trend.

The volume of transactions fell in January largely because there were fewer portfolio sales. “We've been mostly surprised, especially given that 2016 was a record volume year, portfolio executions were off,” says Chris Akins, senior managing director for multifamily with CBRE Capital Markets. “Although CBRE had several successful portfolio transactions, there were many others that were either pulled or failed to transact as a complete portfolio.”

The number of sales of individual apartment properties also fell, by 28 percent. That’s a giant decrease, though it’s less than the 62 percent drop in volume for portfolio sales, according to RCA.

In February, the volume of apartment properties traded fell 10 percent below the year-ago period, according to a preview of RCA data. “The trends into February will be much improved, but still down at a double-digit pace,” says Costello.

Prices continued to creep upwards as cap rates dropped even lower. However, that is likely to change this year.

“We would expect cap rates to trend upwards,” says Akins. Cap rates fell in January to reach an average of 5.5 percent, down 30 basis points from the year before. Cap rates for garden-style apartment properties fell more steeply, by 40 basis points, to 5.6 percent.

Cap rates have been trending lower throughout 2016—despite widespread sentiment that they could not fall much further. The trend seems to have continued into February, according to RCA data. “Preliminary figures suggest that pricing for apartments in February has not reversed,” says Costello.

However, many investors now seek a higher return on acquisitions. ‘We see investors on a quest for higher yields,” says Akins. “Investors are more willing to invest in niche categories and non-gateway markets.”

As some buyers and sellers step away from the market, the participants left behind create a very heated environment. “Because the year has been off to a slow start, the lack of supply and incredible demand for product will create a very competitive environment,” says Akins. “The wild card is the growing interest from foreign capital in the multifamily space, which could continue to hold cap rates level.”