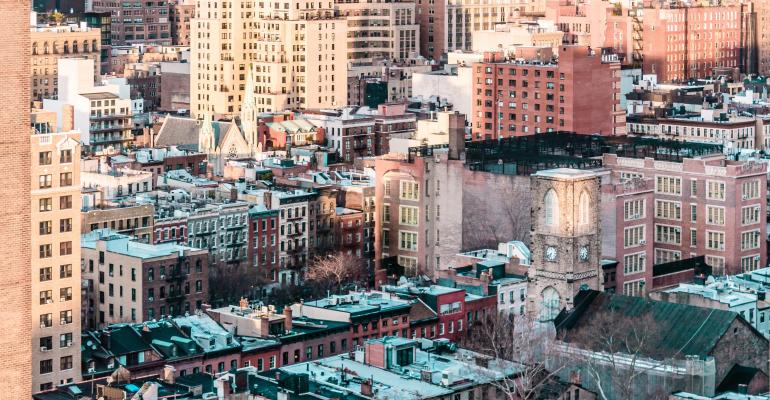 The U.S. apartment completion volume across the country’s 100 largest metros has accelerated to more than 80,000 units per quarter in 2017, up from around 60,000 units a quarter in the previous couple years. That aggressive new supply tally is creating a more competitive leasing environment for top-of-the-market product, especially in urban core settings where so many communities are coming on the market within blocks of each other.

Digging deeper into the story, urban core results obviously vary quite a bit from one spot to another due to factors that range from how many new apartments are being built to how many jobs are being added. Measuring health in terms of annual rent growth for new resident leases, results range all the way from spectacular—a 7 percent rent escalation in downtown Seattle—to dismal—a 5 percent rent loss in downtown Houston.

Downtown apartment markets that fall into the broad solid performer category include the urban cores of Atlanta, Austin, Texas, Boston, Chicago, Dallas, Kansas City, Mo., Minneapolis, Phoenix and Raleigh, N.C. Within this group, annual rent growth is running around 2 percent to 3 percent—healthy results, but only about half the pricing power recorded in the handful of metros in the best-performing segment. Unit availability is mostly limited to the just finished properties moving through initial lease-up.

However, performances in these markets are inconsistent from quarter to quarter, or even month to month. Rent growth can suddenly come to a halt when a big block of new product enters the initial leasing stage, although strong demand will bring a quick return of pricing power.

Within this group of markets, Boston and Minneapolis probably have the strongest near term outlooks. While meaningful construction is occurring in the urban core of each city, deliveries over the next couple of years will at most simply match the volumes that were absorbed without much difficulty over the previous few years.

If performance vulnerability exists in Minneapolis, conservative pricing behavior often exhibited by the metro’s regional operators could end up being what dampens results. With today’s annual rent growth around 3 percent in the downtown/University submarket and around 5 percent in the adjacent uptown/St. Louis Park neighborhood, operators are already pushing rents at some of the highest levels achieved historically.

Atlanta and Dallas are markets that could drop out of the “solid performer” category for urban core properties relatively quickly. The cities boast rapidly expanding urban core economies, and they are absorbing product additions at breakneck speed. However, construction has gotten so aggressive that rent growth is showing signs of stalling. It’s unclear whether a slight stumble in the most recent performance data is a blip on the radar or a sign of what’s to come.

Rents have been essentially flat for a while now in a big block of downtowns, including the urban cores in Charlotte, N.C., Los Angeles, Miami, San Antonio, Texas, San Diego, San Francisco, San Jose and Washington, D.C. Let’s also put Manhattan and Brooklyn in this category, although Manhattan performances by individual neighborhood are wide-ranging.

In Los Angeles, downtown rents are now stagnant to slightly down, despite the fact that the metro as a whole registers impressive rent growth near 5 percent. Downtown Los Angeles is still not an especially well-established marketplace, and it has struggled to absorb new supply totaling more than 7,000 units over the past three years. With ongoing construction at 8,000 or so units, a brief period of sizable rent cuts is looking like a possibility.

Charlotte’s uptown/South End neighborhood is another spot where flat rents are in contrast to pricing that’s up significantly—about 5 percent—on the metro level. Still, the neighborhood ranks among this economic cycle’s most stunning success stories in the big picture. Existing stock, which was limited to about 7,200 units at the beginning of 2010, has grown to roughly 16,000 units, and rents grew 22 percent on a same-store basis as inventory more than doubled.

Differing from the pattern anticipated for most urban core submarkets, Charlotte’s uptown/South End area is probably going to gain some performance momentum in the near term. While the 2,800 units on the way in this zone still represent a sizable block of product to be absorbed, ongoing construction is actually at its lowest point in four years.

A handful of urban core markets have consistently recorded rent cuts of late, and they are registering vacancy that reflects weakness beyond just big blocks of new supply moving through initial lease-up.

Effective rents in downtown Portland, Ore. have been gradually drifting downward throughout the past year, and Denver’s urban core has been losing pricing power throughout 2017. Furthermore, Central Portland occupancy of about 94 percent is off roughly 300 basis points from the level recorded a couple years ago, and downtown Denver’s occupancy rate of about 91 percent is down even more drastically.

Building activity is beginning to cool in the urban cores of both Portland and Denver. However, the additional product still in the pipeline suggests rents in both spots will probably continue to slip.

The central Nashville, Ten. submarket ranks among the country’s most aggressive apartment construction zones in the current economic cycle. More than 7,000 of the neighborhood’s 17,000 total apartments came on the market in just the past five years. While same-store rents in the neighborhood have climbed an impressive 25 percent since this construction boom started, pricing is now down more than 2 percent on an annual basis.

With about 4,900 apartments still under construction in central Nashville, the near-term delivery volume will remain elevated. Thus, it would be very surprising for rent change to get back into positive territory within this neighborhood over the next year or two.

Houston’s urban core apartments are really taking a beating. Annual rent cuts are right around the 5 percent mark downtown, and similar or deeper losses are occurring in other urbanized zones like the Medical District, Greenway/Upper Kirby, Greater Heights/Washington Avenue and the Galleria/uptown area. Furthermore, most of these neighborhoods have been suffering rent loss since late 2015 or early 2016.

About half of the 21,800 apartments currently under construction in metro Houston are on the way in the more urbanized submarkets, including some 4,200 units specifically in downtown. Those deliveries point to a continuation of the very competitive leasing environment and the likelihood of further rent losses in the remainder of 2017 and perhaps on into early 2018.

However, looking on to the middle to latter months of 2018, Houston’s urban core apartment market appears positioned for a sharp comeback. Minimal deliveries beginning a year or so from now are only part of the story, as the positive outlook also reflects a healthy economy and, subsequently, strong demand for housing. Rebounding from the energy-related cuts seen earlier, Houston is already back on the list of U.S. employment growth leaders, adding jobs at a pace of more than 50,000 positions annually as of mid-2017.

Greg Willett serves as chief economist of RealPage Inc. He also heads the research and analysis team at RealPage. Greg began his tenure in the multifamily industry as a data analyst and later served as a research consultant specializing in feasibility evaluations of new apartment community development and existing property acquisition.