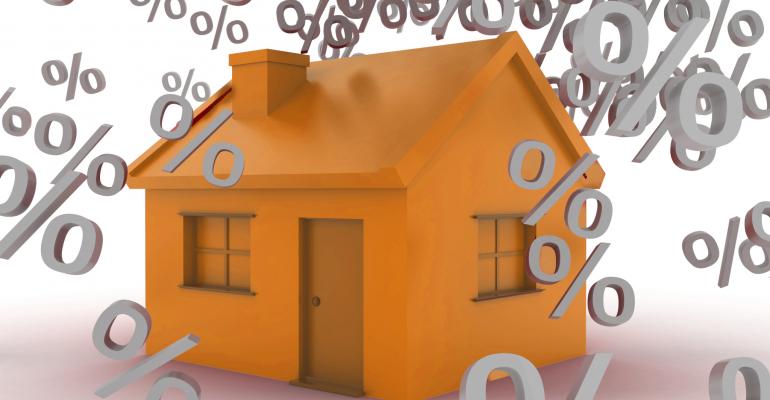 Analysts are parsing the words of the Federal Reserve with fervor as we approach what many believe will be the first interest rate increase since 2006 before the end of this year. While the Fed considers many different data points to gauge the state of the economy and help guide policy decisions, its dual mandate of price stability and full employment automatically places an outsized emphasis on inflation and the unemployment rate.

Unemployment has already fallen quite far, but inflation remains stubbornly low relative to the 2 percent target set by the Fed. Yet apartment rents have been climbing for several years now. Since shelter costs comprise a large portion of the CPI’s basket of goods and services, why has inflation been so subdued? In this column, we will take a look at what effect rent increases have had on inflation and might have in the foreseeable future. We will also consider the role housing prices play in the inflation outlook.

Since 2012, shelter costs have been on the rise, climbing to 3.0 percent year-over-year as of April before dipping to 2.9 percent in May. Given that shelter makes up a large chunk of the basket of goods which CPI is based on (and an even larger share of core CPI), this has propped up core inflation. As evidence, core CPI minus shelter has actually been on the decline for several years, falling from a high of 2.5 percent year-over-year in late 2011 to just 0.7 percent as of the end of 2014. There has been a slight uptick since the beginning of 2015, but the figure stands at just 0.9 percent as of May. The result of this tug of war between prices for shelter and all other core items has been core CPI consistently trending under 2.0 percent since early 2013 within a range of 1.6 percent to 1.9 percent.

However, Reis forecasts indicate that multifamily rent growth is already past its peak. In the five years since hitting their cyclical nadir, effective rents have increased 17.4 percent. Annual rent growth hit its peak in 2012 when effective rents climbed 3.9 percent. After a dip to 3.3 percent in 2013, growth popped back up to 3.7 percent in 2014. Expectations are for a steady decline in the rate of rent increases for the foreseeable future. Year-over-year growth already slowed to 3.5 percent as of the first quarter of 2015.

A massive wave of new supply coming online in the near future will place downward pressure on rent growth in the coming years, with growth likely to slip below 3 percent annually around 2017. This tells us that shelter inflation won't be the catalyst for an acceleration in overall inflation. In fact, with rent growth expected to gradually decline, shelter's upward pressure on headline figures will begin to wane. CPI figures are already bearing this out. After a rapid rise in shelter price increases over the past few years, annual shelter inflation has leveled out over the past year, staying within a fairly tight 2.9 percent to 3.1 percent band. 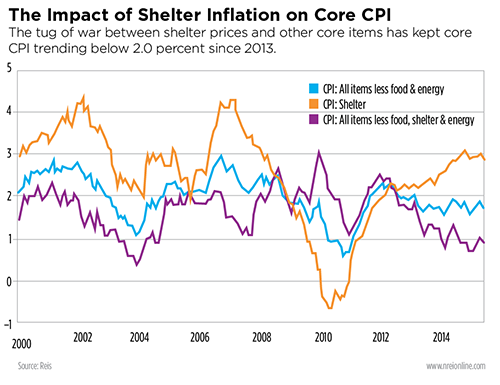 We have focused so far on apartment rents, but more than 60 percent of all households own their homes. So how do home prices factor into this discussion? Due to the way that the price of shelter is calculated within CPI, rising home prices would not directly impact CPI figures. Statisticians face a tough task when attempting to incorporate non-rental housing costs into inflation calculations. While homes provide shelter, they are also a form of investment. For many, a house acts both as a place to live as well as a store of value. A large portion of many households’ wealth is actually the equity they own in their home. Due to this fact, home prices are not a good indicator of actual shelter costs.

A measure called the Owner's Equivalent Rent is used to account for this disparity between home prices and shelter costs. This portion of CPI is actually based on rental rates of nearby units, meaning that the shelter portion of CPI is mainly impacted by rental rates as opposed to home prices. While home prices do tend to lead CPI inflation, there is not necessarily a direct causal relationship between the two. For home prices to rise, credit (especially mortgage credit) needs to be expanding, which one would expect to lead to increased economic activity and higher inflation. In a more direct sense, increased demand for homes results in increased demand for durable goods and thus places upward pressure on prices, but it's unlikely that this by itself would be the central reason to expect heightened inflation.

We should make one important clarification. In this analysis, we have focused on CPI to measure inflation as this is the most popular measure cited. However, the Fed’s preferred inflation measure is the Personal Consumption Expenditure (PCE) Index. The two measures are different in a variety of ways, one of which is that they apply different weights to various items within the two indices.

Most importantly for our discussion here, the PCE Index places a much lower weight on rent than CPI does. The relative weights can change, but rent tends to comprise more than 30 percent of the CPI basket of goods and services while only making up around 15 percent of the PCE Index. The root cause of this difference is the larger amount of expenditures accounted for in the PCE Index. Since the Fed favors the PCE Index as a measure of inflation, it is placing less emphasis on rent inflation than would be the case with CPI. So not only is rent inflation set to trend lower in the coming years, but its influence on any monetary policy decisions is implicitly dampened by its lower relative weight in the PCE Index.

So what should we look for to drive inflation higher? Gradually increasing energy prices would be crucial to putting upward pressure on the headline CPI figure. But when examining core CPI, rent forecasts are telling us that we shouldn't expect shelter prices to rise at a faster pace than has already been observed.

Instead, an increase in consumer demand and retail sales will be the key. Retail sales have continued to be lackluster, particularly for goods (spending on services has been strong), which is a bit of a surprise considering many expected a fall in oil prices to boost consumer spending. This has restrained the rate of inflation, as has the strength of the dollar (which makes imports relatively cheap). Apartment rents may have reached new heights in the post-recession economy, but the lack of upward pricing pressure for many other goods and services has kept inflation in check. Above all else, strong economic growth, higher wage increases and improved consumer demand will be the key to pushing inflation more in line with the Fed’s target.