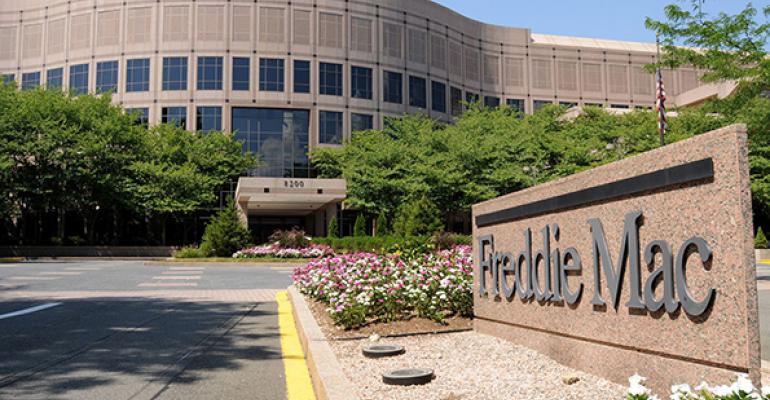 Fannie and Freddie Hit the Brakes on Multifamily Lending

Fannie Mae and Freddie Mac are trying to reign in robust multifamily lending that has them racing toward their annual production caps very early in the year.

Fannie and Freddie have introduced rate hikes over the past few weeks and tightened underwriting as a means to slow lending activity. The rate increases have amounted to about a 50 basis point total increase in their rates.

“Their volume has been significant,” says Gerard T. Sansosti, executive managing director at commercial real estate intermediary HFF in Pittsburgh. “Between the deals that are already closed or committed, the agencies could reach that cap by August or September.”

The caps themselves are relatively new. Former Federal Housing Finance Agency (FHFA) director Ed DeMarco first put the annual caps in place in 2013 as a means to scale back the GSE’s lending on market rate properties and bring back more private capital to the marketplace. To be clear, the loan production caps apply only to the agencies’ market rate apartment loans. Both Fannie and Freddie do have other capital available that they use to fund affordable housing, small balance loans and manufactured housing that do not count against the cap.

The market rate lending volume is off to a booming start this year because of higher sales volumes, more loan maturities and construction loans that were done in recent years that are now rolling into permanent loans. For example, the $12.8 billion in apartment sales that occurred in first quarter of the year is an increase of 55 percent compared to the same period a year ago, according to Real Capital Analytics (RCA), a New York City-based research firm.

“That has put them in a difficult position of meeting their caps this year,” says William E. Hughes, a senior vice president with Marcus & Millichap Capital Corp.

It is still too early to determine whether the rate increases will have the desired effect and send borrowers to other alternatives.

“The last push could have been the tipping point, but we are still watching to see how that unfolds,” says Jay Donaldson, president of NorthMarq Capital Finance. The last rate bump occurred in the latter half of April. A lot of life companies already offer more competitive rates for lower leverage deals. However, the increased pricing now puts Fannie Mae at a higher rate compared to CMBS, which also offers leverage at 75 or even 80 percent. The agencies are known for providing high leverage loans up to 80 percent.

One reason that the rate hikes have not been effective in slowing lending volume is that rate hikes in general often tend to spark more activity. People panic and move quickly to lock-in rates, notes Sansosti. In addition, rates overall are still incredibly low with the 10-year Treasury hovering around 2 percent. So even with a 50 basis point increase, the rate for most Fannie and Freddie borrowers is still between 4 and 4.5 percent.

The agencies are not likely to disclose any additional data on lending volume until their second quarter results are released this summer. “What I’m hearing is that we’re closer than what you might think. In other words, they might be out of business in the next month or two as it relates to market rate transactions,” says Hughes.

Borrowers’ access to financing is not a concern as there is plenty of capital in the marketplace looking to fund deals on both the debt and equity side. Rather, the challenges Fannie and Freddie face present an attractive opportunity for other lenders to expand their market share.

“I think CMBS, life insurance companies and commercial banks are going to be able to step in and pick up the void,” says Hughes. CMBS shops in particular could see some of the bigger gains as they are also higher leverage lenders. “Most CMBS shops are probably licking their chops to be in a positon to take market share in the multifamily arena,” adds Hughes.

Fannie and Freddie have submitted a request to the FHFA to raise their caps for the year, which would free up more capital for lending. If that is granted, that increase would likely be for an additional 20 percent or $6 billion dollars each at most. There also would likely be some restrictions on where that money can be spent, such as limiting allocations to housing projects in secondary and tertiary markets where there is a need for workforce housing.

“I think that if they do give them an increase in this allocation, I think it will come with strings attached to it,” says Sansosti.