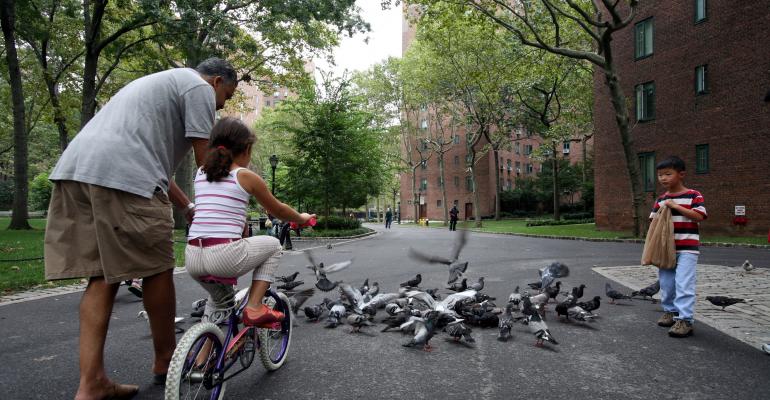 The History of CRE Investors’ Fascination with Stuy Town

No matter how complicated the fortunes of New York’s Stuyvesant Town and Peter Copper Village multifamily community get, the complex continues to be viewed as a prize by major institutional investors. In the latest twist, private equity giant the Blackstone Group has teamed up with Canadian firm Ivanhoe Cambridge to purchase the 80-acre, 11,232-unit complex for $5.3 billion. For the past five years, the properties have been operated by special servicer CWCapital Asset Management, the result of a $5.4 billion sale to Tishman Speyer and BlackRock Inc. at the top of the previous market cycle that had gone awry.

1942: Metropolitan Life Insurance Co. starts planning a multifamily rental project on Manhattan’s East Side that would give priority to veterans returning from World War II.

August 1947: The first tenants move into the newly-completed Stuyvesant Town complex; they pay rents ranging from $50 per month to $91 per month, or the equivalent of approximately $533.51 to $970.99 in today’s dollars.

1947-1984: A 25-year tax abatement agreement between Metropolitan Life and the City of New York, followed by a 10-year extension in 1974, serves as an incentive for the owner to keep apartments at Stuyvesant Town and Peter Cooper Village rent-stabilized.

April 2000: Metropolitan Life Insurance goes public in a $2.88 billion IPO and shortens its name to MetLife.

Early 2000s: MetLife begins gradually deregulating apartments at Stuyvesant Town and Peter Cooper Village as they become vacated. The move leads to tension with tenant representatives as they complain that the strategy takes away the option of affordable housing for middle-income New Yorkers. According to the U.S. Census Bureau, the median household income for New York City between the years of 2009 and 2013 totaled $58,003 a year and the average number of people per household was 2.6. In Charles Bagli’s book on the sale of Stuyvesant Town and Peter Vooper Village, “Other People’s Money,” he cites that at the time of the sale, in 2006, approximately 15 percent of the tenants at the properties were senior citizens presumably living on social security. But a MetLife executive is also quoted saying that the median income for all tenants at the property was about $80,000 and the average income was $120,000.

October 2006: MetLife’s board of directors approves the sale of Stuyvesant Town to Tishman Speyer Properties for a record-breaking $5.4 billion, only approximately $112 million of which reportedly came from Tishman Speyer, including only $56 million from Jerry and Rob Speyer themselves. The rest of the funds came from a $3 billion interest-only mortgage that was supported by commercial mortgage-backed securities and $1.3 billion in other loans, plus more than $1 billion from equity investors. According to a 2009 article in New York magazine, equity investors in the property and debt holders on the deal’s mortgage included, among others: Fannie Mae and Freddie Mac, office REIT SL Green Realty, the government of Singapore, pension fund CalPERS and the Church of England.

Tishman Speyer’s closest bid rival for the sale was a partnership of Apollo Real Estate Advisors, ING Clarion and the Dermot Company, which lost the deal by only $70 million, according to Bagli. Other bidders reportedly included Related Cos., Vornado Realty Trust and LeFrak Org., as well as the Stuyvesant Town and Peter Cooper Village tenant association. The minimum bid was set at $4.5 billion. Notably, Bagli’s book points out that some high-profile New York landlords, like the Durst Org., were initially interested in the properties, but decided not to bid after realizing how much they would have to pay. Douglas Durst, Bagli writes, “discussed a possible joint venture with Richard LeFrak, but … had a difficult time with the new math that seemed to govern real estate.”

The plan was to deregulate and raise rents at as many as 72 percent of the complex’ rent-stabilized apartments and replace many of its tenants with younger, more affluent residents.

2008: The combination of the worst recession in decades and a strong legal challenge from tenants (Tishman Speyer and BlackRock were the only companies among the bidders for the properties who opted not to meet with the tenant representatives, according to Bagli’s book) derail those plans.

In 2009, the New York Court of Appeals rules as illegal rent increases at 4,400 apartment units that took place as far back as 2003 because the buildings’ owners continued to receive tax benefits from New York City at the same time. At the time of the sale, in 2006, about 27 percent of the apartments at the properties were priced at market rate.

January 2010: Tishman Speyer makes a decision to walk away from the mortgage, opting for a deed-in-lieu of foreclosure. At the time, Stuyvesant Town was valued by some sources at as low as $1.8 billion. The New York Times describes the financial damage to Tishman, however, as “minimal.”

May 2014: CWCapital Asset Management announces it will move to foreclose on the properties and put them on the auction block.

May 2014: Bloomberg reports that Fortress Investment Group may buy the properties for $4.7 billion and is looking for financing, but the deal never comes to fruition.

October 2015: Blackstone and Ivanhoe Cambridge strike an agreement to buy Stuyvesant Town and Peter Cooper Village for $5.3 billion, with a promise to New York City officials to keep 5,000 of the units at affordable rents for the next 20 years. Those units will be reserved for families making $62,000 a year or less, with monthly rents for a two-bedroom apartment set at $1,500. Another 4,500 units will be reserved for families with incomes of up to $128,000, with two-bedrooms renting at $3,200 a month. Blackstone is ostensibly able to commit to this plan because the company intends to hold the properties “long-term” and “doesn’t need outsizes returns.” According to estimates by the CoStar Group, Blackstone and Ivanhoe Cambridge are paying 82 percent of the “peak 2007 valuation” on the property. 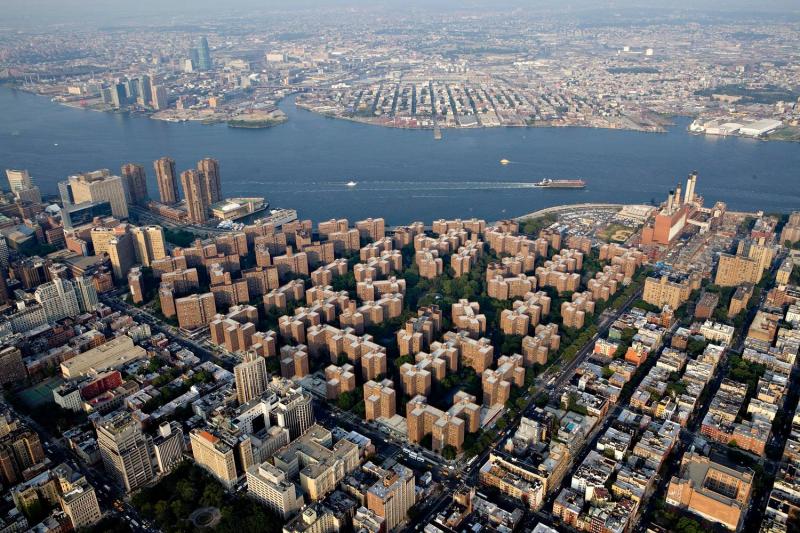