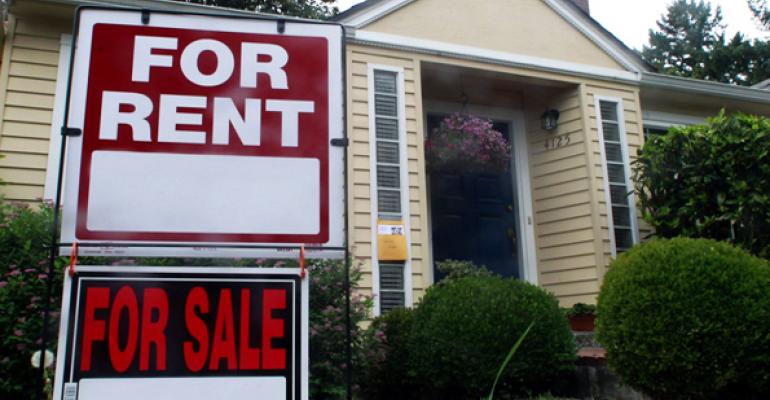 How Is the Price of Owning vs. Renting Affecting the Multifamily Market?

The ratio of home prices to rents has stayed flat for the fourth year in a row in most of the major U.S. cities.

Buying a home is one of the most pivotal moments of a person’s life. Most dream of owning their own home to gain equity in an asset that usually grows in value. Still others prefer the flexibility of renting a home that eases the risk should the housing market crash or a neighborhood lose value.

The truth is most people do not get to choose when they can buy a home. They spend years trying to save for a down payment while rising rents are eating into their incomes. But if one were able to time the housing market based solely on the cost differential between renting and owning, how do today’s prices and rents compare? In short, the ratio of home prices to rents has stayed flat for the fourth year in a row in most of the major cities as shown in the ratio of Case-Shiller index to Reis rent in the chart below. This ratio, however, runs somewhat counter to this trend in a number of metros.

Looking at the ratio of average apartment rent to Case-Shiller index for the 20 metros that S&P Case-Shiller collects the data for shows a remarkably volatile trend from 2000 through 2012. Most ratios fell dramatically as house prices rose, then soared as house prices collapsed, then settled lower and stayed flat from 2013 through 2016. The ratio of the weighted average of the 20 metro’s rents to Case-Shiller 20-city index ranged from 7.6 to 8.0 over the last four years. Most metros follow this pattern, but the ones included in this chart tell a somewhat different story.

In many of the metros shown above, the trend lines show a decline over the last few years. This means that home and condo prices are actually rising at a faster rate than apartment rents. This is noteworthy, but not surprising. One of the main drivers of escalating home prices is a lack of supply of homes on the market. In contrast, an excess supply of new apartments under construction is easing pressure on rent growth. The top two markets shown above, New York City and San Francisco, saw condo and co-op prices rise more slowly in 2016 than in previous years, but rents declined for both metros in the second half of the year due to the increase in new construction.

The only other metro that shows a consistent downward pattern is Miami, where rent growth has also trailed the growth in housing prices, but only slightly.

Both Chicago and Atlanta show a slight uptick in the index that suggests that housing prices are not keeping pace with rent growth. In the case of Chicago, the ratio shows very little volatility even during the recession, which means that the prices of homes and rents moved at a very similar pace.

Housing prices in Atlanta declined more than others during the recession and were slow to bounce back at the start of the recovery. This is why the line seemed to spike in 2012. Home prices have recovered at a stronger rate over the last two years, but apartment rents increased at an even sharper rate as job growth in Atlanta has exceeded that of other metros.

Again, the black line showing very little change since 2013 is representative of most of the 20 cities included in this study, including Los Angeles, that is nearly parallel. This is a good sign that the market is balanced. This balance contrasts sharply with the booms and busts of prior years when the housing market was over-inflated and later crashed.

While this chart provides a timely measure of how the price to rent compares to the price to own, far more variables—mortgage rates, in particular—would be needed to make this critical decision. Even if the chart above showing slightly higher home price increases to rents suggests that renting may be less expensive today, the buying option might look ideal in retrospect five years from now.

Barbara Byrne Denham serves as an economist and Victor Calanog as chief economist with Reis Inc., a provider of commercial real estate data and analytics.