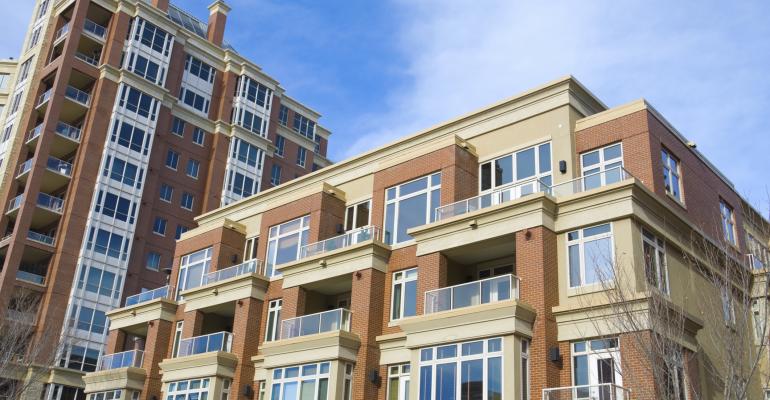 Foreign buyers of U.S. apartment buildings spent well over $10 billion per quarter in recent quarters, above the volume seen in late 2016 and early 2017.

Money from overseas keeps flowing into the apartment sector.

“The presence and the amount of foreign capital coming into the U.S. market has

had more of a positive effect on values than many apartment owners realize,” says John Sebree, director of the national multi housing group at brokerage firm Marcus & Millichap, based in Chicago.

A global economic expansion has been underway long enough for many investors to begin to worry about a potential downturn. But foreign money continues to flow into U.S. apartment properties, since these buildings are considered one of the safest possible places for foreign investors to put their money.

The amount of money that investors of all types spent on apartment properties in the U.S. slackened in 2017, while prices continued to rise and the yields investors were willing to accept continued to drop.

“Deal activity was sliding in recent years, but this decline stabilized in the first quarter,” according to New York City-based research firm Real Capital Analytics (RCA). “Cross-border activity has been part of this stabilization.”

Foreign buyers of U.S. apartment buildings spent well over $10 billion per quarter in the first quarter of 2018 and the second half of 2017. That’s a lot more than investors spent on a quarterly basis in late 2016 and early 2017, according to RCA.

Foreign investors are also finding more ways to invest in the apartment sector. “You have a lot more strands coming in. Now it’s not just large institutional blocks of capital,” says Sebree. “Smaller funds or wealthy individuals are finding ways to get money into the U.S. as well.”

The total amount of cash spent by these investors may be even higher than the volume of “international investment” tabulated by firms like RCA. “There is a lot of global capital that never gets measured,” says Brian McAuliffe, president of institutional properties for CBRE Capital Markets, based in Chicago.

Foreign money can now enter the U.S. through structures including private equity funds and private real estate investment trusts (REITs). These entities often partner with firms based in the U.S. that can handle the management of the properties and can supply deep knowledge of the local real estate market. “Sophisticated structures like private REITs significantly help to attract that international capital,” says McAuliffe.

Foreign investors are also happy to achieve yields on their investments that are a relatively high compared to what they can get in their home countries. “No matter how low our cap rates are, theirs are typically a little lower,” says Sebree, speaking of investors from countries like Canada. “Oftentimes, international capital is searching for returns that are quite modest compared to domestic U.S. investors.”

And then there are some investors from overseas who may be happy with almost any yield on their investment—provided they are confident that their investment will not lose value. “If you are a wealthy industrialist in a country that has uncertain economic stability… the true motivation of that investor is wealth preservation,” says Sebree. For example, wealthy individuals and families from Latin America or the Middle East are often eager to invest some of their money in U.S. real estate.

These firms are gathering capital from individuals and institutions throughout that part of the world. “In that region, Singapore is the financial hub,” says Sebree.

Investors like these have filled some of the gaps left by Chinese investors that have been less active in the U.S. market. Overall, “foreign investment in the U.S. had slowed down in last couple of years, partly because of China cracking down on exportation of capital,” says Sebree.

Canadian investors, including Caisse de Depot and Canada Pension Plan Investment Board (CPPIB), have also been very busy. Ten of the top 15 foreign buyers of apartment properties in the U.S. were Canadian over the 12 months that ended in the first quarter of 2018, according to RCA.

“Canada has traditionally been the largest international investor in the U.S. apartment market,” says Sebree. “It’s the country with an apartment market most similar to the U.S.”

And the Canadians aren’t finished. In May 2018, Brookfield Property Partners, another Canadian firm, reportedly paid $1.9 billion to Carmel Partners for the "Project Europa" portfolio of seven properties in California, Hawaii and New York City with a total of 3,870 apartments.