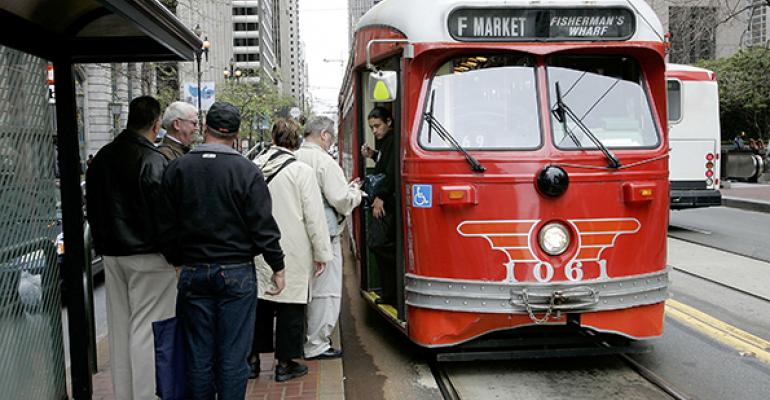 Mass Transit to Shape Cities, CRE of the Future

It’s no secret that urban living has undergone tremendous change in the past 10 years. The gentrification of many urban neighborhoods and the desire among younger people to reduce their commuting time to work are going hand-in-hand with a renewed commitment in the U.S. to rebuilding our infrastructure, including mass transit.

The urbanization phenomenon has been well documented in PwC’s annual “Emerging Trends in Real Estate” report. It is a trend that initially favored densely populated urban cores in such cities as New York, Boston, Washington, D.C., San Francisco and Chicago. Since the end of the Great Recession, however, many other cities have discovered that it’s possible to recreate the efficiencies and attractiveness of an urban core environment in different markets and suburban locations.

That is happening with a firm eye on mass transit. Today, cities such as Boulder, Colo., Nashville, Tenn., Portland, Ore., and others are enhancing quality of life with improved mobility. Developers are focusing on building in areas close to mass transit, both underscoring and taking advantage of the attractiveness of the live/walk/work lifestyle and its impact on the urban living experience.

The Bureau of Labor Statistics has documented how mass transit reduces a reliance on cars, freeing up more income for other needs. Meanwhile, according to the American Public Transportation Association, mass transit produces 95 percent less carbon monoxide, 90 percent less volatile organic compounds, and about half as much carbon dioxide as private vehicles. The Transportation Research Board asserts that public transportation encourages economic and social activities, and helps create neighborhood centers that are economically stable, safe and productive.

In short, cities are asking themselves what they’d like to look like in the future, even as people are reassessing how they want to live.

In the 1960s and 1970s, the talk was primarily about the growth of cities together with their airports. Today, the conversation is about a daily lifestyle calculation. Access to major arteries has always been significant, but we’ve seen interesting trends impacting both transportation and real estate development.

For example, fewer young people are getting driver’s licenses these days. The portion of Americans aged 16 to 24 who have a driver’s license fell to 67 percent in 2011, its lowest level in roughly a half-century, according to federal statistics. Preferences for live/walk/work communities will only accelerate as driverless cars are introduced. After all, why own a car when you can have access to public transit or call a driverless car service?

Mass transit is also having an impact on corporate relocations, hiring and the new quality of life that millennials are intent on achieving. As these people flock to city centers, they draw jobs, economic productivity and higher wages. Urban Studies Journal has noted that a “10 percent increase of transit seats or rail service miles per capita” translates into wage increases of between $1.5 million to $1.8 billion, depending on the size of the city.

Key urban populations are growing at rates higher than secondary and tertiary cities, and in many places landlords are able to obtain significant rental premiums with properties close to mass transit stops. For example, landlords in San Francisco with apartments located within a five-minute walk of a transit station enjoy a rental premium of 10.9 percent above overall market rates, according to a December 2014 study by CoStar Group. Similarly, Boston and Atlanta see rental boosts of 9.0 percent, Chicago 8.5 percent, Dallas 8.3 percent and Minneapolis 7.5 percent.

Thus, it’s no surprise that when new transit stops are announced, developers are flocking to pick sites nearby that will offer mixed-use living conveniences. And those new transit stops are being added rapidly. In a study by PwC and Oxford Economics, spending on transportation infrastructure for new rail initiatives in the U.S. will grow to a little more than $100 billion annually by 2016, and about $118 billion annually by 2020.

Globally, transportation--which accounts for roughly 22 percent of infrastructure spending worldwide--is projected to increase at an average annual rate of about 6 percent over the coming decade. The greatest amount of growth will be seen in emerging markets, in particular where government finances are healthier and economic expansion means more consumer spending.

The urbanization trend is very real and growing yearly. Cities are becoming desirable urban destinations for both human and corporate relocations, largely because of their ever-improving quality of life. Mass transit is a big reason why.

R. Byron Carlock Jr. is a principal and the national real estate practice leader at PwC, based in New York. He can be reached at [email protected].