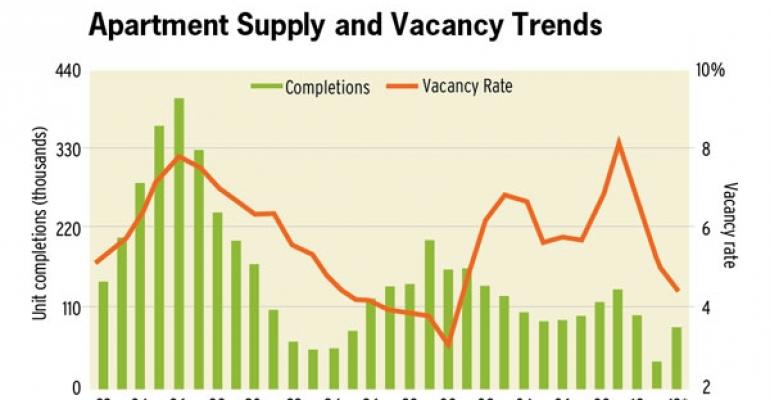 Apartment rents are still growing across the country, but not as quickly as they were in the summer of 2011, when growth in effective rents peaked.

“Things have slowed since a year ago,” says Jay Denton, vice president of research for data firm Axiometrics Inc., based in Salt Lake City. “The growth rate has slowed for rents... The growth for occupancies is starting to flatten out.”

Axiometrics predicts that average apartment rents will settle into a steady pace of growth over the next few years, similar to rental markets in the mid-1990s, as occupancy rates stay very high.

The percentage of occupied apartments appears to be settling in at close to 95 percent. The national occupancy rate actually dropped very slightly in July, inching downwards 3 basis points to 94.33 percent from 94.36 percent in June. Occupancies are still up 71 basis points from 93.62 percent the year before, according to Axiometrics, which bases its numbers on monthly surveys of 5.5 million apartments in more than 140 metropolitan areas across the country.

Data from Reis Inc., based in New York City, also show the balance stabilizing between occupied and vacant apartments. Reis’s count of the percentage of vacant apartments fell to 4.7 percent in the second quarter, from 4.9 percent in the first quarter. “A 20 basis point drop is, after all, the smallest quarterly decline in national vacancies in two years,” according to Victor Canalog, vice president of research and economics for Reis.

Continued economic uncertainty is helping to restrain further growth in occupancy rates. Also a growing number of property managers now use revenue management systems to help set their rents. Many computerized systems automatically begin to push rents higher on renewal once the occupancy rate at an apartment community reaches about 95 percent. That tends to make the occupancy rate more predictable in tight apartment markets. “You can almost for the revenue managed properties pencil in 95 percent and you would be correct,” says Denton.

The occupancy rate for class-A and class-B properties has been at roughly 95 percent for the last year. Class-C properties have been catching up, and are now at a little less than 90 percent occupied on average across the U.S., says Denton.

Annual effective rent growth slowed from 3.83 percent in June to 3.73 percent in July, according to Axiometrics. That’s the lowest year-over-year growth since August 2010. Rent growth peaked last July at annual rate of 5.32 percent, but it has been close to an annual rate of 4.0 percent the past nine months due primarily to the under-performance in August, September and November last year.

Rent growth at 4 percent is difficult to maintain year after year, especially when for-sale housing is relatively cheap and job growth is weak. “Typically, when housing is very affordable, rent growth is not strong,” says Denton.

Weak employment can also hold rents back. “A weaker pace of job growth implies temporary near-term moderation in the magnitude of rent increases,” according to John Chang, vice president of research services at Marcus & Millichap. In the strongest markets, where rents have grown faster than the national average, “renters have displayed increased sensitivity to strong rent hikes,” says Chang.

However you slice it, rents are rising faster than inflation overall. The Consumer Price Index has grown at a rate of less than 2 percent a year this summer and grown less than 3 percent a year since the financial crisis.

The rate of new deliveries is accelerating. Developers will open 87,000 new apartments in 2012, with nearly two-thirds of them opening in the second half of the year. Approximately 129,000 units are going online in 2013, according to Axiometrics.

That may sound like a lot—but over the decade before the crash, the construction of apartment developers consistently finished roughly 300,000 new units a year. “We’re not even where we were from 1997 to 2008,” says Denton.

Apartment developers have bold plans for the future, but those plans are still taking shape. “We are tracking 800,000 units in planning not yet under construction,” says Denton. But the number is less impressive, considering that an apartment property can take years to plan and build—especially in the infill, high-barrier-to-entry locations that many developers now favor.

The constrained supply of new apartments should help keep the markets relatively stable. Barring some unexpected shock to the economy, the apartments markets will continue to be tight for the foreseeable future.