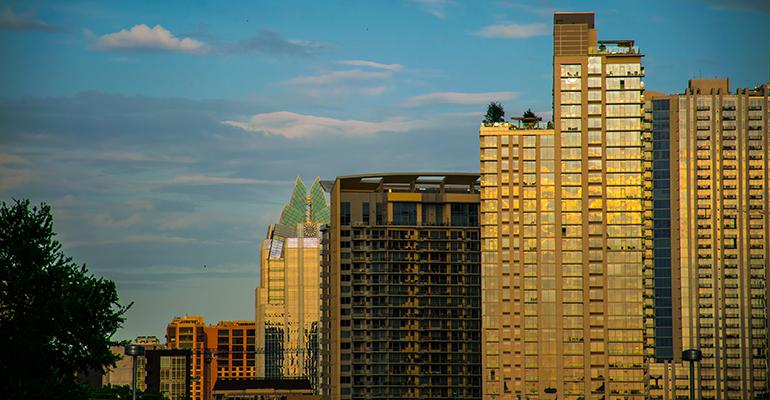 Rent growth is seriously slowing down in a handful of markets.

While apartment rents are still growing nationally, in a few cities and submarkets rents are growing more slowly or even beginning to shrink.

“The only spots where you might find effective rents dropping are in locations affected by a large number of new developments leasing up,” says Ron Witten, founder of data firm Witten Advisors, based in Dallas. “The concessions which these projects offer during initial lease-up sometimes spread to nearby properties.”

The number of new apartments scheduled to open in the U.S. totals 274,700 units, up from 235,300 units added in 2017 and 220,800 units added in 2016, according to research firm Reis Inc. Strong demand for apartments is likely to absorb most of these new units, keeping rents growing overall. However, rent growth is seriously slowing down in a handful of markets.

“We expect total completions by year-end to reach a new cyclical high. Markets such as Nashville and Charlotte, leaders in new apartment construction, will face more pressure at the top end of the market,” notes an analysis by CoStar Portfolio Strategies.

“Among big metros (the 50 largest nationally), the only spot with actual rent cuts on an annual basis is Austin, Texas,” says Greg Willett, chief economist for property management software and services provider RealPage, Inc., based in Richardson, Texas. Apartment rents in the city fell 0.4 percent on average over the 12 months that ended in the first quarter of 2018.

“It is undoubtedly new construction pushing down rent growth,” according to the CoStar analysis. However, the number of new apartments opening is expected to drop later this year. Rent growth is expected to recover because of the slowdown in deliveries combined with employment growing at 3.5 percent annually through March of this year.

Flooding damaged many houses in Baton Rouge, La. in 2017. For a time, that helped fill many rental apartments in this small city. But now many of the houses are repaired and are attracting apartment renters, pushing average rents lower over the 12 months that ended in the first quarter.

The 5.2 percent annual price cut in Baton Rouge, according to Willett, “reflects that occupancy in conventional product is down about 500 basis points on an annual basis, falling to just 91.5 percent.”

Developers build too much in San Antonio, Texas

Apartment rents grew just 0.7 percent in San Antonio, Texas over the 12 months that ended in the first quarter. That makes San Antonio the second slowest large city in the country for rent growth, among the 54 largest cities, according to CoStar.

“San Antonio is another market where supply is the main culprit,” according to the research firm. Developers opened 11,000 new apartments over the past two years, a 6.8 percent increase in inventory, which is 24 percent above the historical average for 2002-2016.

Rents also grew slowly in larger cities like Baltimore and New Orleans. These metros seem to be perennially stagnant, with weak employment growth and negative domestic migration. Supply still matters in these markets, but it is just as much a matter of lacking demand.

“Outside of Austin, rent growth in the top five markets has been weakest in submarkets like Downtown Baltimore and Downtown San Antonio,” according to CoStar.

Apartment rents grew by just 1.1 percent over the year that ended in the first quarter of 2018, according to CoStar.

Rents grew by just 1.2 percent in New York City over the 12 months that ended in the first quarters, according to CoStar.

Secondary core submarkets like Long Island City in Queens are also already showing negative rent growth, and led the nation in the amount of new apartments under construction today, according to CoStar.