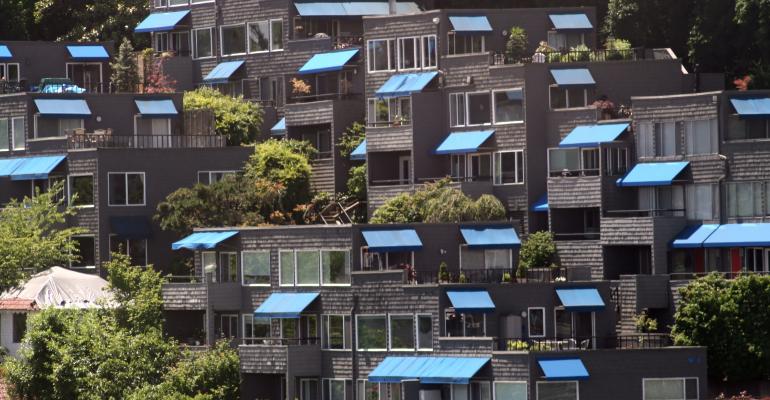 The search for yield is leading investors to smaller properties in smaller markets.

Investors keep looking for apartment buildings to buy at good prices. The search is leading them to smaller properties in smaller markets.

The amount of money multifamily investors are spending has stabilized at a high level. Investors continue to accept relatively low yields on their acquisitions, even though interest rates rose substantially in 2017 and are expected to rise further. Part of the reason is that apartment rents continue to rise across the country, attracting investors to bid for new properties.

Last year, the volume of investment sales in the sector started slow and finished strong, so that the full-year was roughly equal to that achieved in 2016, with $152.7 billion in transactions, according to Real Capital Analytics (RCA), a New York City-based research firm. That was down just 4.0 percent from $159.1 billion the year before “We had about an equal volume of transactions in 2017 and 2016,” says Lee Everett, senior managing consultant for research firm CoStar.

So far, 2018 seems to be continuing at the same level. January was a busy month for the multifamily sector, with $9.9 billion in sales. February was slower, with $8.1 billion. Together they add up to roughly the same total as last year. “Volume is about the same as it was at this early point in 2017,” according to RCA.

The total dollar amount is high compared to the historic average, though it is lower than the volume achieved during the peak of the cycle in 2015. “The velocity of investment is still above 2014—and no one was complaining about low velocity of sales in 2014. We are still at a high level of velocity,” says Sebree.

Prices are high and rising for apartment properties, according to RCA’s Commercial Property Price Index (CPPI). The index rose 7.3 percent for properties in the six major metropolitan areas over the 12 months that ended in February. The index rose even more sharply—12.4 percent—in non-major metropolitan areas over the same period.

These high prices are keeping the yields produced by apartment properties very low, despite rising rents. The interest rates that investors have to pay on long-term loans have also risen, and are expected to rise more. Eventually, this should have an effect on the yields investors are willing to accept. But cap rates on deals for apartment properties remain at historic lows, averaging well under 6.0 percent, according to RCA.

“There is scant evidence of an uptick in apartment cap rates yet,” according to RCA.

Long-term interest rates are expected to rise in 2018 as raises to short-term rates by the Federal Reserve ripple through the economy, eventually pushing long-term rates higher and supporting higher cap rates. “The only variable we are monitoring right now is the 10-year Treasury. Over the next couple of years, it is going to drift up,” says Sebree.

In the meanwhile, investors are hunting for higher yields and properties that are likely to appreciate in value. The search is pushing them to smaller assets, often located in smaller markets. As a result, CoStar’s “equal-weighted” index of prices for apartment properties has risen more quickly than CoStar’s “value-weighted” index over the last two years.

Investors also remain enthusiastic about the apartment sector overall. The fundamental demand for rental housing continues to be strong, says Sebree. “I see absolutely nothing that changes that,” he notes. “Most owners see a pretty good runway ahead of them.”

Construction delays have also helped protect the apartment sector from overbuilding. Mid-rise apartment buildings are now taking an extra six months, on average, to complete. That’s twice as long as the average delays experienced at the same time last year.

Some of the uncertainties that hung over the sector last year have resolved. For example, the tax reform that passed recently could have removed many provisions that multifamily investors depend on. But the final version of the reform that became law turned out to be very favorable to the apartment sector.