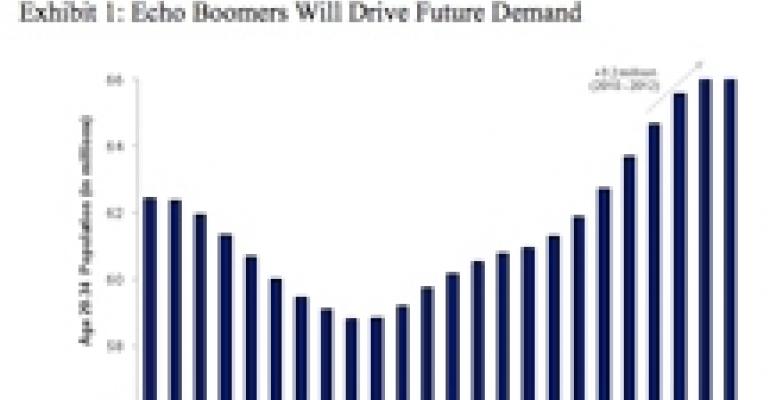 A sharp increase in transaction activity for multifamily properties over the past year is indicative of strong investor interest in the sector, buoyed by improving fundamentals and demographic trends, which should support an increase in rental demand over the next few years.

The multifamily sector is showing signs of a firmly rooted recovery. According to Reis, net absorption in the third quarter surged by 94,000 units, dropping the national vacancy rate from 7.8% to 7.1%, one of the largest quarterly drops on record. Nearly 22,000 new apartment units were delivered to the market.

A robust cohort of 70 million potential renters born between 1982 and 1995, the so-called echo boomers, is expected to lead the demand for apartment units over the next few years. It is estimated that population of renters ages 20 to 34 will expand by approximately 3.2 million between 2010 and 2012 [Exhibit 1].

Because of the Great Recession, record-high unemployment among workers under 35 years old has pushed many echo boomers to double up with friends or move back with their families. Household formation dropped to approximately 500,000 per year in 2008 and 2009, well below the long-term average of 1.2 million. This pent-up demand is returning to the market as the economy recovers.

Due to a combination of declining property values, falling rents and difficulty in obtaining financing, developers have been forced to scale back pipelines and postpone construction projects. As a result, apartment permits and construction starts have remained low over the past 18 months.

Industry experts project that approximately 99,000 new apartment units will be delivered in 2010, well below the long-term average of 146,000 units. However, as apartment capitalization rates compressed over the past six months, the development spread (development yield minus the cap rate) has once again become positive.

Combined with more readily available financing for the apartment sector relative to other property types, this cap-rate compression has led to increased interest in new development, especially in supply-constrained markets.

Government-sponsored enterprises (GSEs) including Freddie Mac, Fannie Mae, and the U.S. Department of Housing and Urban Development (HUD), have dominated the multifamily financing market. They collectively financed over 80% of all multifamily financing in 2008 and 64% in 2009, according to Federal Housing Finance Agency.

Currently, the GSEs continue to provide attractive fixed-rate financing to the multifamily sector. Loan-to-values typically range from 70% to 80% for a term of seven to 10 years. Debt-service coverage ratios run from 1.25 to 1.35, and the interest rate ranges from 180 to 220 basis points over the 10-year Treasury yield. On average, apartment mortgages are approximately 120 to 150 basis points lower than those of other core property types.

Housing crisis a lift for rentals

Consumer attitudes about homeownership have changed over the past few years. According to a recent survey conducted by Fannie Mae, although most Americans still prefer owning a home instead of renting, nearly 25% of renters say they will wait longer than they previously planned to buy a home.

In our opinion, homeownership could continue to trend toward its long-term average of 65% over the next 12 to 18 months. Rental properties should continue to benefit from this trend.

The apartment sector is benefiting from pent-up demand, declining homeownership, and a limited supply pipeline. Rental demand is highly correlated to job growth.

Year-to-date through October 2010, the U.S. economy has added a total 874,000 new jobs and the labor market is projected to recover by 2014, according to Moody’s Economy.com.

We expect the national average vacancy rate to decline through at least 2013 as demand substantially outpaces supply. After falling by 2.9% in 2009, we believe that effective rents will increase from 2011-2014.

Despite several positive signs supporting the U.S. apartment fundamentals over the next few years, we have identified a few risk factors that pose potential threats to the recovery of the apartment sector.

• A fragile economy would keep home prices down and interest rates low, pushing up housing affordability and keeping single-family homes and condos an attractive alternative to rental apartments.

• Markets such as Las Vegas, Phoenix, parts of California, and Florida that have been stung by the housing market downturn are expected to take longer to recover because of excess supply.

• The GSEs have been critical in providing attractive financing. Any significant restructuring in the near future could reduce the availability and increase the cost of debt financing.

If interest rates rise significantly over the next few years, asset values and projected investment returns could be negatively affected as a result.