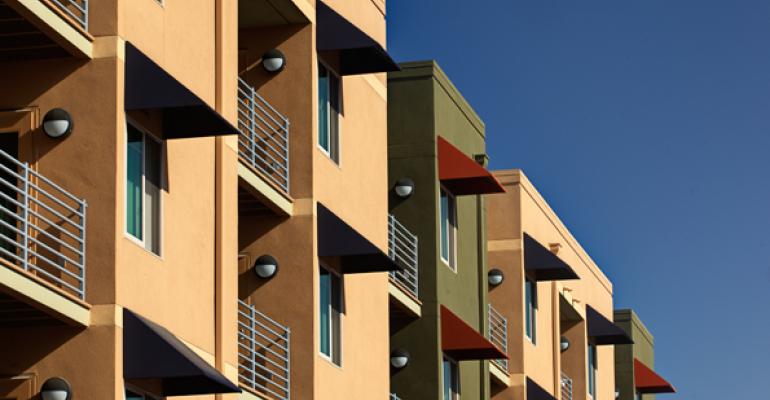 Pullback Continues in the Investment Sales Market for Apartment Properties

Sales of single properties are slowing, suggesting broad correction in the market.

Investors spent a lot less money on apartment properties so far this year compared to 2016, but prices in the sector keep rising anyway.

Prices for mid-rise and high-rise properties inched up 1.0 percent year-over-year, and prices for garden-style apartment properties grew 10.0 percent in the second quarter of 2017, according to the Real Capital Analytics Commercial Property Price Index (RCA CPPI).

Investors still want to buy apartment properties. However, at this point in the cycle, there are not that many assets available for purchase. As buyers go after the assets that are left, they are bidding up the prices for class-B properties and buildings in secondary and tertiary markets.

“We have far more buyers than we have sellers,” says John Sebree, national director in the national multi housing group of brokerage firm Marcus & Millichap.

The total dollar value of apartment properties bought and sold in the first half of 2017 was just $62.6 billion. That’s 17.0 percent below the total for the same period in 2016. It’s a steep decline, but still represents an improvement compared to the first quarter of 2017, when the decline was much sharper, according to RCA.

But the second quarter may also be worse than it appears at first. Much of the dollar volume came from a single giant REIT transaction, Starwood Capital Group’s completion of its acquisition of Milestone Apartments for more than $2.8 billion. Sales of single properties are slowing, suggesting broad correction in the market.

Experts have run through several potential explanations for falling sales volumes. Starting after the Presidential election in 2016, investors slowed down their purchases of apartment properties. As the same time, interest rates rose by more than 90 basis points in 20 days. For a while, it made sense to connect the two. But long-term interest rates have sagged since the start of the year. The volume of sold properties has not recovered as a result.

It now seems that the drop in deal volume may be a correction. “We are reverting back to the mean more than anything else,” says Brian McAuliffe, president of institutional properties for real estate services firm CBRE.

It’s hard to know what a historically normal year is for the apartment sector now. Recent history includes both the boom years before the financial crisis and the years of a slow recovery. In 2015 and 2016 there was another boom in sales of apartment properties.

“We’ve had some really robust years,” says McAuliffe. “Those transactions were facilitated by significant appreciation in property values. There were a lot of gains that investors wanted to realize.” For some experts, it’s no surprise that the dollar volume of apartment deals shrank in 2017. “It was more of a surprise last year that the transaction volume continued to be so high,” McAuliffe says.

As investors struggle to find properties to buy, they are willing to bid high for class-B apartment assets. “The spread between the highest quality assets in the market and the market average is narrowing,” says James Costello, senior vice president with RCA.