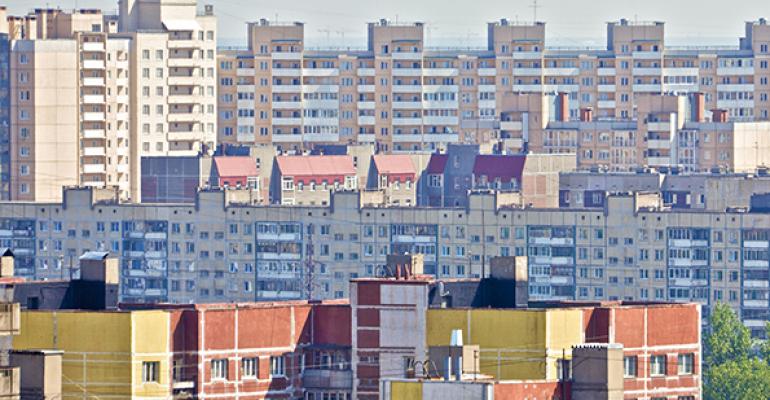 Over the next two decades, demand for rental apartments will likely continue to be strong, if current homeownership rates remain where they are or improve only modestly.

The homeownership rate and how low it will remain going forward is one of the biggest questions hanging over the apartment market. As the rate continues to drop, more households move into rental housing, keeping apartment rent growth high and vacancy rates low. Experts disagree on whether the homeownership rate will continue to fall as it has since the housing boom, or stabilize and even modestly recover. Any of these potential outcomes, however, should still be enough to produce strong demand for rental apartment units not just in the next few years, but through the next decade and beyond. 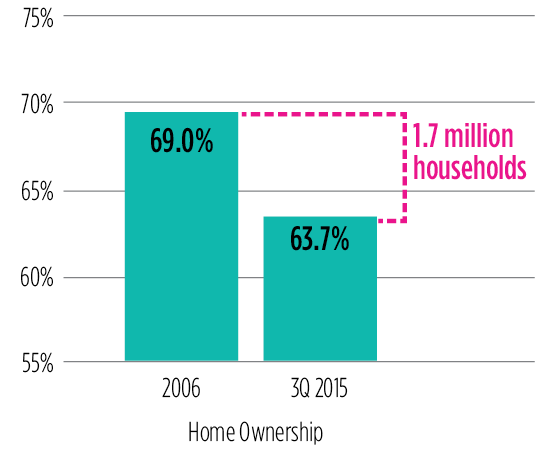 The surprisingly high rent growth and extremely low vacancy rate in the apartment sector over the last year has partly been the result of the homeownership rate staying low. The rate has dropped to 63.7 percent in the third quarter of 2015—down from 69.0 percent in 2006, near the height of the housing boom. The difference represents 1.7 million households living in rental units instead of for-sale homes. The current homeownership rate is the lowest it has been since 1993.

Demographic trends—not foreclosures—drove the homeownership rate further down over the last year. Older households, many of whom own their homes, are being replaced with younger households and minority households, who are less likely to own their own homes. Financing the purchase of a home is still difficult, especially for these households.

Even without further declines to the homeownership rate, demographics will drive up the number of renter households over the next 10 years by more than 4.4 million, according to the Joint Center for Housing Studies at Harvard University. That’s an average of 440,000 new households a year.

“While recent estimates suggest that homeownership rates may be firming in some areas, there is no evidence so far of a significant rebound,” according to the Center.

Some recovery for homeownership?

Some experts feel that the homeownership rate is likely improve, though modestly.

Most people still favor owning their own homes. More than three-quarters (82 percent) of survey respondents thought owning a home makes more financial sense than renting one, according to Fannie Mae’s National Housing Survey for the fourth quarter of 2014. Even among renters, more than two-thirds (67 percent) agreed with this statement. That’s barely changed compared to the survey results from the fourth quarter of 2010.

So much depends on whether young people can afford to buy a home and can get a home loan. People younger than 30 years of age will form more than 20 million new households between 2015 and 2025, and for now the experts think most of those will be renters, according to the Joint Center.

“Demand for homeownership should pick up as the economic recovery continues, but whether mortgage credit will be widely available to satisfy stronger demand remains to be seen,” according to the Center.

Stagnant wages and heavy burdens of student debt affecting young people could also keep them from buying their own homes, regardless of their preferences.

“Resumed growth in the number of young homeowners would stand out from the experience of recent decades, in which declines have been the norm,” says Simmons.

If the homeownership rate continues to fall, demand for apartments will grow for decades.