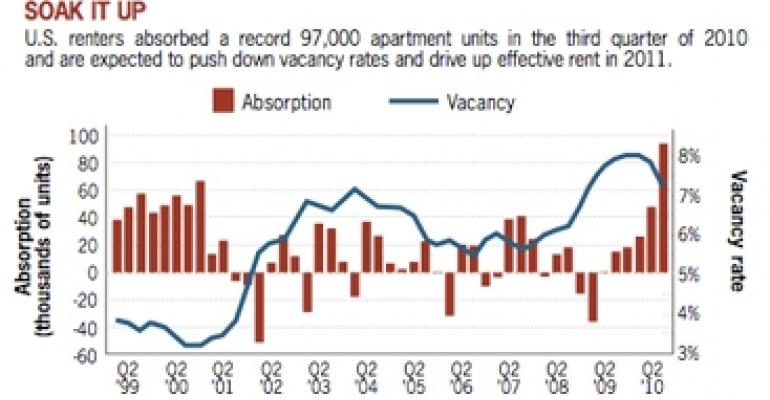 Stars Are Aligned for Bullish Apartment Outlook in 2011

The U.S. economy has added 874,000 jobs since employment bottomed last December, and the 151,000 jobs added in October represented more than twice the number analysts had expected. Although unemployment is still high at 9.6%, researchers speculate that job gains have given workers enough confidence in their own job security to break away from family or roommates and live on their own.

U.S. Census data suggests that 2 million people between the ages of 20 and 35 moved in with family or roommates over the past five years, notes Hessam Nadji, managing director of research services at Encino, Calif.-based Marcus & Millichap. He expects that pent-up demand to fuel absorption through the first half of 2011.

The largest commercial real estate financing Marcus & Millichap Capital Corp. has arranged so far this year was a multifamily deal. And lenders and investors alike view apartments as a uniquely promising property type in a year when other commercial sectors continue to struggle, reports Jake Roberts, vice president for capital markets in the financial intermediary’s West Los Angeles office.

“I see multifamily [lenders] being the most aggressive of all the commercial asset classes,” says Roberts. “It’s the most stable sector.”

Roberts and Anita Paryani, a senior director at Marcus & Millichap Capital Corp., arranged a $39.45 million loan from a government-sponsored enterprise (GSE) to refinance The Villas of Rancho Palos Verdes, a 215-unit garden apartment complex in Rancho Palos Verdes, Calif. The deal closed Nov. 8. Built in the 1970s and renovated between 2002 and 2004, the ocean-view complex drew competing financing offers from life insurers as well as GSEs Fannie Mae and Freddie Mac.

Roberts declines to reveal the interest rate on the 30-year loan, locked in for the first 10 years. A low 10-year Treasury rate, which was 2.65% on Nov. 10, has enabled Roberts to close deals with long-term financing for as little as 4.35% recently.

Lenders will compete to finance quality apartment properties with high occupancy rates because that asset type appeals to investors who buy mortgage-backed securities from the GSEs, says Roberts. “You still have high (renter) demand for multifamily, and we’ve seen concessions come down across the board in Southern California,” he notes.

During the third quarter, the volume of leased apartments increased by 94,000 units over the previous quarter, according to New York-based Reis. That’s a record increase for any quarter since Reis began tracking the sector 30 years ago.

The U.S. apartment vacancy rate topped out at 8% in the fourth quarter of 2009, but fell to 7.1% in the third quarter this year, according to Reis. Look for rent growth and absorption to gain momentum next year, say researchers. The national average effective monthly rent for an apartment is expected to reach $986 by the end of 2010, says Calanog, up 1.9% from the end of 2009. In 2011, the average effective rent is expected to climb another 2.6% to $1,012.

Developers are expected to deliver 130,000 new apartments in 2011, or 14% less than the 150,000 units added this year, says Gleb Nechayev, senior economist at CBRE Econometric Advisors. He expects rents to climb 1% year-over-year by the end of 2011.

Residential mortgage foreclosures and accelerated job creation could further boost demand, says Nechayev. “There are a lot of other factors we’re not counting on that could make that rent growth stronger.”