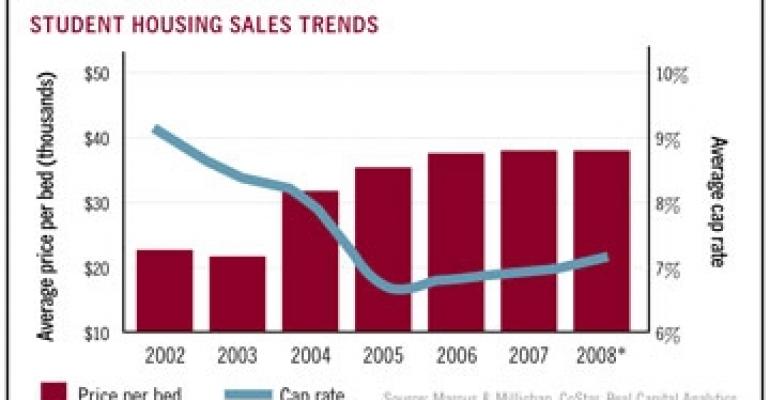 An estimated 140 lenders have stopped making federal student loans and 40 private lenders have cut back on educational funding, a new report shows. On the bright side, college enrollment is expected to increase by 8% over the next four years and a projected 15 million newly degreed workers will be needed to place retiring baby boomers through 2012. As a result of the supply and demand, student-housing prices have held firm and investment activity is projected to move at a solid clip this year, according to the report from brokerage Marcus & Millichap.

Indeed, the sector has been booming for most of the decade. Between 2004 and 2007, student-housing transactions rose 63%, while dollar volume jumped more than 90%. In 2008, transaction activity, including the $1.2 billion acquisition of GMH Communities by American Campus Communities, rose by 27%.

Capitalization rates currently average 7.2%, or 50 to 100 basis points higher than last year’s levels, according to Marcus & Millichap. Broken down, Class-A cap rates in primary markets have remained relatively stable during the past 12 months while Class-C properties in tertiary areas have experienced rises of 100 basis points.

High construction costs coupled with growing demand have kept upward pressure on rents, which continue to rise and are currently up 3% from levels in 2008. Vacancy rates, however, have risen to 7%, up from 6% in 2008. Developers have delivered 57,000 beds since 2000 and another 23,000 beds are slated to come on line this year.

The off-campus student housing of today is a far cry from the cinder block dorms of the past, as well as today’s on-campus housing. Students are treated to amenities such as fitness centers, movie theaters, tanning beds and study lounges. And builders are branching out into mixed-use projects such as the 1,758-bed development at the University of Ann Arbor in Michigan, which is being combined with 16,000 sq. ft. of retail space.

One bump in the road that may negatively impact the ability of baby boomers to pay for their children to live in luxurious student housing is that home equity loans, an oft-used source for college funding, are harder to get. That will make paying the tab for higher education even more difficult in the foreseeable future.

The good news, however, is that rental rates run a wide gamut — from $300 per bed for modest quarters in tertiary markets, to $1,500 per bed for well-appointed accommodations in primary markets.