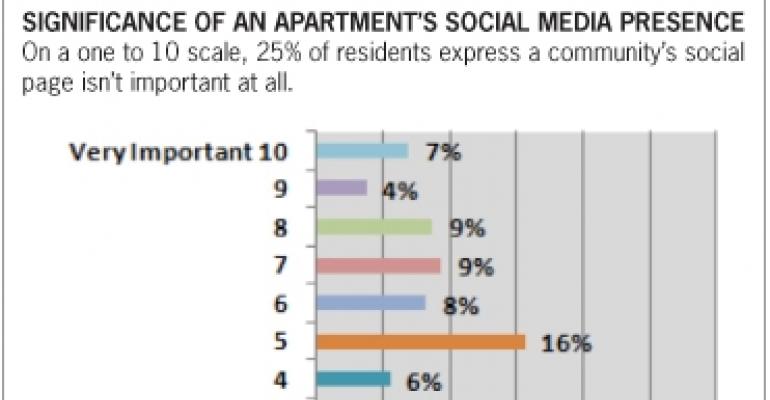 Survey: Social Media Slow to Catch On with Apartment Residents

It seems everyone’s connected through social media these days. But a recently released survey finds that more than nine in 10 conventional apartment residents (persons who don’t reside in student housing) haven’t visited any apartment community’s social networking website this year.

Not Facebook, not Twitter, and not any other social websites. That’s the conclusion of a national survey released by Houston-based J Turner Research (JTR), a multifamily market research firm.

“The percentages were surprisingly low,” says Joseph Batdorf, principal of JTR. “Social networking has infiltrated the majority of consumer, retail and business sectors, but the findings in our survey during the last six months indicate apartment residents aren’t engaging their community’s social efforts as might be the case in other categories.”

Residents were asked to share their social networking habits since January 2010. Data has been collected on a monthly basis through June 2010, and is ongoing throughout the year. To date, 15,964 conventional residents have responded for a 29% response rate.

The survey found that 69% of conventional apartment residents have a Facebook account. And 45% of those residents visit their social network daily.

“We’re pushing more organic interaction between our residents on Facebook,” says John Selindh, vice president of marketing for Camden Property Trust, which owns and/or manages more than 63,000 units nationwide. Camden’s residents have their own communication channel via social media, but one that Camden can actively monitor and participate in when necessary.

A publicly traded REIT, Houston-based Camden is protective of its brand and wants to know what’s being said about its apartment communities online.

Although the JTR survey shows low usage of social media sites by apartment residents, owners like Camden believe changing demographics will continue to place importance on new avenues of communication such as social media.

Separately, JTR distributed 25,605 surveys to student housing residents across 128 college campuses nationwide. Among the 10,713 students who responded, 40% indicate they have visited an apartment community’s social media website this year versus only 7% for conventional apartment dwellers.

A staggering 90% of student housing residents are plugged into Facebook. And 65% of those residents check their social media network daily.

“You can either be a part of it or you can turn your back on it, but residents are going to interact and use it, especially recent college graduates,” says Selindh. “It’s one more way we can engage the residents and understand them.”

Camden management believes that if it actively engages its residents online through social media, an individual complaint or concern is more likely to be taken offline directly to Camden. But even if a complaint is voiced in an online social media community, Camden is there to answer it.

Among the 7% of conventional residents in the JTR survey that actually check a community’s social media page, it is primarily during the prospective tenant stage.

As a resident searches for another place to live or a better deal within the same complex, 62% of those who visit the social website stop by to see what other people are saying about the community; 57% check to conduct preliminary research about the apartments, floor plans or unit availability; and 37% visit to find discounts or deals related to signing a lease.

However, only 11% visit an apartment’s social media website to contact a staff member about scheduling an onsite visit, and only 8% are there to initiate the leasing process to live at the community.

“Social media isn’t necessarily a traffic generator,” says Selindh of Camden. The REIT uses Twitter to notify followers of unit availabilities and rents,but stresses that social media is only one avenue of communication with its residents.

“The numbers aren’t quite there yet for social media sites to drive leasing activity due to other online sites providing that information,” says Batdorf.

JTR will continue the multifamily social media survey through at least 2010.