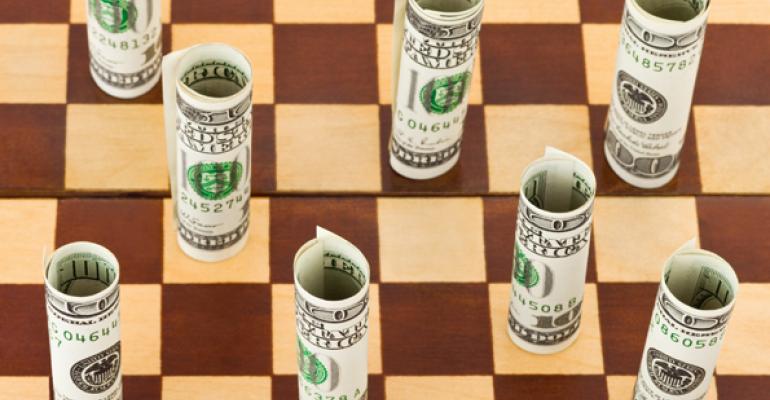 Long-term interest rates may increase by more than 100 basis points this year, or they may stagnate, or even shrink back to last year&rsquo;s low levels.&nbsp;

Just when lenders and borrowers thought interest rates would finally start to rise in 2017, interest rates stopped going up. Lenders are struggling to adapt. But they keep on lending.

“Between prospects of deregulation, global political uncertainty and the possibility of significant rate hikes, lenders and borrowers are acting with more caution,” says Justin Bakst, director of capital markets at research firm CoStar. “We see more activity in interest rate derivatives to hedge against rising rate risk. In addition, lenders are taking an active role in evaluating markets and submarket fundamentals and pricing risk accordingly.”

Long-term interest rates may increase by more than 100 basis points this year, or they may stagnate, or even shrink back to last year’s low levels. This uncertainty makes it difficult for the owners of apartment properties to plan in advance on how to meet their financing needs. However, lenders still have money to lend on apartment properties.

“The uncertainty has led to less acquisition volume, which has shown in the first quarter of the year. The uncertainty, however, has not affected the amount of capital available for transactions, where both debt and equity are at all time highs,” says Charles W. Halladay, senior managing director and co-head of the San Francisco office with capital services provider HFF.

Balance sheet lenders in particular have been eager to make permanent loans on apartment properties.

“Banks and life companies are still leading the way as the search for yield continues even in the face of rising interest rates,” says Justin Bakst, director of capital markets at CoStar. Banks increased their total volume of lending to apartment properties by 2.55 percent in the first quarter, while life companies increased their volume of lending by 1.46 percent, according to CoStar.

“Life companies have been doing more lending than they have in years,” says Brian Stoffers, global president of debt and structure finance with commercial real estate services firm CBRE. “They were underweighted in multifamily and the like the supply and demand scenario.”

But other types of lenders have also been able to underwrite high volumes of permanent loans. Lenders who provide loans through the programs of the Federal Housing Administration (FHA), for example, have been working hard to make their loans more efficient and easier to close. FHA loans now take four to six months to close, once the application has been turned in, according to Stoffers. That’s still a long time, but it’s much better than the six to nine months that the loans used to require.

FHA loans also offer discounts of up to 40 basis points on apartment projects that are in affordable housing programs or include sustainable design features.

Fannie Mae and Freddie Mac programs also continue to originate a high volume of loans, taking full advantage of the freedom given to them by the federal conservator to lend without limits on affordable housing properties.

The lenders struggle to balance their need to allocate capital with the uncertainty in the markets. “In the hyper competitive lending market that exists today, lenders are constantly trying to come up with innovative product that will facilitate better structure for their customers,” says HFF’s Halladay. “This includes taking into account future value-add needs and future funding around renovation components. Lenders have also began to offer more floating rate product on a long-term basis to facilitate pre-pay optionality and lower pay rates.”

The uncertainty of long-term rates

After the Presidential election, it seemed for as if the long-predicted interest rate hikes would finally arrive. The new President promised tax reform and a huge new infrastructure program. Both would provide stimulus that could heat the economy enough to cause interest rates and inflation to begin to rise. Many long-term interest rates are based on the yield on 10-year Treasury bonds. Those yields rose nearly a full percentage point in the weeks after the election to reach 2.6 percent.

News out of Washington, D.C., has tamped down some, though not all, of that optimism. The yield on benchmark 10-year Treasury bonds stopped rising and has fallen back to roughly 2.4 percent. “I question whether we are going to get tax reform,” says Stoffers.

Interest rates are still expected to increase in the long term. At the very least, officials at the Federal Reserve are expected to raise interest rates two more times in 2017, by an estimated 25 basis points each time. That would make the targeted Fed funds rate 1.255 percent. However, that increase is not expected to move long-term interest rates much. “The market anticipates the yield on 10-year Treasury bond will be at 2.64 percent by year end,” says CoStar’s Bakst.

Lenders are also pushing interest rates down by cutting the “spread” between the interest rates that they charge and benchmark yields, according to Stoffers.

So even if the Federal Reserve goes ahead with its planned rates hikes, it’s not clear how that would affect interest rates for long-term borrowers.

“The most important unanswered question is: what will interest rates look like in 2017 and beyond?” says Bakst. “The market may be calling for higher interest rates, but how the long end of the yield curve reacts will dictate commercial real estate debt and availability of capital."