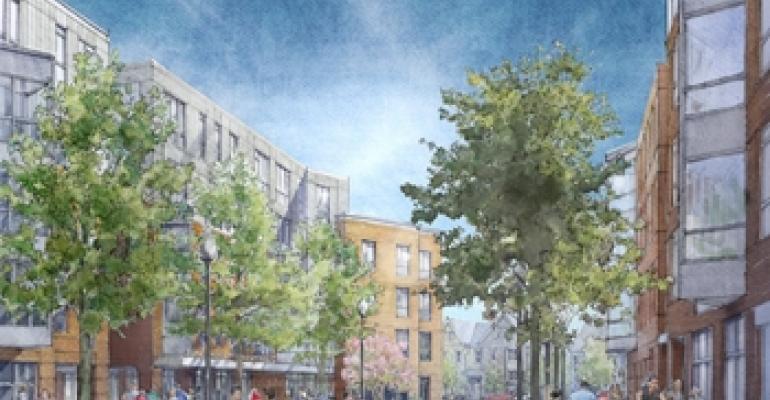 Construction has begun on the New Charlesview, one of the nation’s largest multifamily starts within the past year which, remarkably, is mostly affordable housing.

Located near Harvard Square in Boston’s Allston-Brighton neighborhood, the project is being funded through an unusual mix of sources, with development underway by two nonprofits: The Community Builders (TCB), a national urban housing developer, and Charlesview Inc., an interfaith organization founded in 1969 between local Catholic, Jewish and Methodist congregations to develop and manage the original secular, federally subsidized Charlesview Apartments.

The $207 million, LEED for Neighborhood Development-certifiable New Charlesview features both new construction and redevelopment. Phase One, the new development portion of the project, is the construction of New Charlesview at Brighton Mills, a $157 million project that will be situated on nearly nine acres along Western Avenue, replacing Brighton Mills, a closed-down strip mall on a contaminated brownfield. The nine acres of land is owned by Harvard University and was made available in a mutually-beneficial land exchange for the current 4.5-acres Charlesview site. Phase Two of the project is the $50 million redevelopment of Charlesview Apartments, a 1970s-era subsidized housing project with 213 units located several blocks away on 4.5 acres adjacent to Harvard University.

The financing model used for the New Charlesview is unique in part because a major share of the funding has been provided through an agreement with the U.S. Department of Housing and Urban Development (HUD). The agreement allows Section 8 (or low-income housing tax credit eligibility) project-based rent subsidies for 211 of the old Charlesview Apartments to be transferred from the old to the new complex.

HUD generally transfers Section 8 subsidies for small projects, allowing assistance to be reassigned from the current location to another site in accordance with Section 8bb of the U.S. Housing Act of 1937, says Kristine Foye, deputy regional administrator of HUD’s New England Regional Office. Such subsidy transfers, called “porting” by many in the multifamily housing industry, are usually made from one existing community to another already built and occupied one. Small uses of porting are somewhat common, says TCB Project Manager Jeff Beam, but the porting at New Charlesview is on a large scale and involves new construction.

Section 8bb allows HUD to transfer remaining budget authority to support existing dwelling units, where: (1) the existing contract is terminated, is not renewed or expires and (2) if the budget authority is apportioned by the OMB and is not required to meet rescissions provided in the appropriations, explains Foye.

In 2007, TCB approached HUD with a proposal to transfer the project-based assistance and use restrictions to the New Charlesview under Section 318 of Public Law 109-115, says Foye. Based on the specifics of the project, the HUD Boston Field Office and HUD Headquarters Office of Asset Management made the determination that the transaction would be processed in accordance with Section 8bb of the U.S. Housing Act of 1937, and not under Section 318.

“HUD has given the owner a commitment of good faith and good intentions to review and process the Section 8bb transfer when the new units at the New Charlesview site are completed,” says Foye. “Certain conditions must be met before the transfer is finally approved and the Section 8 Housing Assistance Payments contract is assigned to the new property.”

It’s the ability to port the HUD contract that’s made New Charlesview feasible, says Beverly Bates, senior vice president, Development Operations, at TCB. ”It is what will preserve this crucial asset of affordable housing for low-income families beyond the life of the original Charlesview property.”

The agreement “reflects many people working together within the established rules to do something that’s unconventional,” adds Beam.

HUD took another step essential for the financial viability of the New Charlesview by agreeing to mark to market the rental rates, which secures a guaranteed income stream, crucial for attracting other lenders and investors, Beam says. Also, HUD came in with a 90 percent risk-share guarantee on the construction and permanent debt.

At the ground-breaking for New Charlesview Residences at Brighton Mills, Phase One of the project, on May 16, 2011, Barbara Fields, HUD’s New England Regional Administrator, called the project an “innovative partnership between HUD, the Commonwealth of Massachusetts, the City of Boston, Harvard University, the owners and The Community Builders.”

Porting isn’t exactly common, notes Foye. “It was possible for New Charlesview because our review of their proposal found them eligible under the statute and the future transfer was demonstrated to be in the best interests of the project and the tenants over the long term,” she says.

However, she points out, “Each property, market and transaction is unique, so it is impossible to determine if what is being done at Charlesview could be replicated elsewhere. HUD processes each requested Section 8bb transfer in accordance with the terms of the existing statute, in response to proposals submitted by owners as part of an overall plan to preserve affordable rental housing.”

TCB arranged for a private investor, Google Inc., to purchase the project’s $27.6 million in low-income housing tax credits. The New Charlesview is attractive for tax credit investors because of its prime location, near the regional hub of Harvard Square and just a block from the Charles River. The development also offers an investor a high-capacity development team and competitive returns and, of course, lowers investors’ tax liability which boosts their earnings per share. However, the project’s large size calls for an investor with deep pockets and an appreciation of affordable housing. Google stepped up because affordable housing development projects seldom encounter financial difficulties and almost never result in a default.

Raising tax-exempt financing for New Charlesview in 2008 put TCB “out in the market at just about the worst time,” says Bates. The deal called for more than $25 million in equity, which is “a big bite for any one investor, but it’s an exciting project with solid financial structuring so it attracted Google’s affordable housing fund to invest in the low-income housing tax credits.”

TCB also negotiated with Harvard University to swap the 4.5-acre site of the original Charlesview for the new nine-acre site a few blocks away and for a significant cash contribution to develop what will be an entirely new city neighborhood. The swap appealed to Harvard because the old Charlesview site is adjacent to the university’s property on the Charles River’s Boston side, where its Business School is located. Harvard is building at the Business School and plans to develop a large life-science cluster across the street.

MassHousing has provided critical debt financing: $106.2 million in construction, bridge and permanent financing, its largest loan package in 25 years. MassHousing communications specialist Thomas J. Farmer says New Charlesview is the agency’s second-largest financing ever of a single rental development. “It’s not often that you are able to transform and revitalize two city neighborhoods through one redevelopment process,” he says.

MassHousing’s contribution to New Charlesview “underscores how important the Charlesview redevelopment will be in providing quality affordable housing long into the future,” MassHousing Executive Director Thomas R. Gleason noted at the New Charlesview ground-breaking, “while allowing Harvard to expand its world-class educational facilities in a way that will also enhance the Allston-Brighton neighborhood.”

The New Charlesview will keep the 40-year-old Charlesview community together, moving 213 families just a few blocks from their current location, in an effort that will help preserve Allston-Brighton’s diversity. The entire new complex, scheduled to be ready for the first occupants to move in by mid-2014, will feature 340 housing units, including 240 rental apartments, of which 211 units will be affordable to low- and moderate-income residents; the remaining 19 units will be reserved for current Charlesview residents without income restrictions. Of the 100 mixed-income condominiums, 26 units will be affordable. The complex’s design features both townhouse and mid-rise apartment buildings.

Entirely new streets will also be created for the New Charlesview, as well as a half-acre public park set to become an integral part of the fabric of the existing neighborhood, a 9,000-sq.-ft. community center, 14,000 sq. ft. of retail space, underground parking for 243 cars and a tree-lined boulevard leading to the Charles River a block away.

The City of Boston requires that new construction be LEED certifiable and the New Charlesview is set to exceed the U.S. Green Building Council’s LEED-Gold certification threshold. The development is located on a transit-oriented site, within walking distance to buses that connect to the Harvard Square subway station. The design of the development promotes walking and biking with coordinated paths, dedicated bike lanes, appropriate lighting and bicycle storage for tenants.

On the site itself, impermeable paving is being replaced by permeable surfaces that incorporate several low-impact strategies to capture rainwater on-site and recharge it into the ground. Underground water collection/recharge cisterns, rain gardens and landscaping negate the need for potable irrigation. The buildings are designed to have energy loads that are at least 20 percent below code and feature gas-fired makeup air units, reduced ventilation rates and reduced hot water loads on central gas-fired service water boilers.

In the end, innovation has trumped the recession, says Bates. “We have a unique capacity to bring together a lot of different stakeholders with very different outlooks and create innovative financing structures that get very large, very complicated developments built.”

Charlesview, noted Tina Brooks, Massachusetts Undersecretary of Housing and Community Development, in a statement, “is a perfect example of state, local and private partners working together to advance a project that results in new jobs, business growth and a better, stronger Commonwealth.”