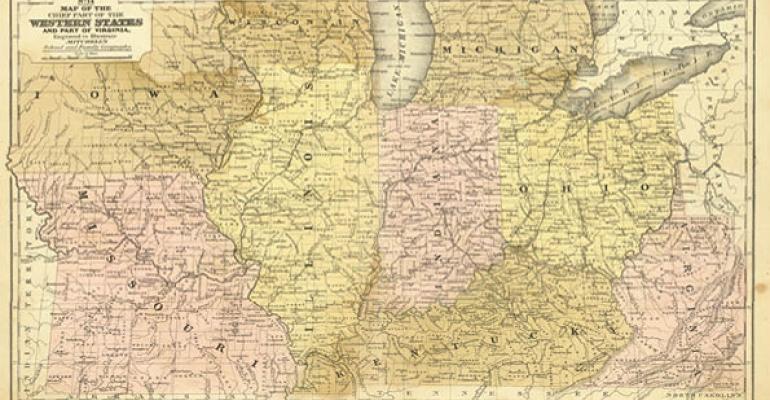 Steady. Low-key. Reliable. Those are some of the adjectives commonly used to describe residents of the Midwest—and they're apt descriptions of the region's apartment market as well.

Secondary and tertiary metro areas such as Cleveland, Kansas City and Indianapolis may not offer the sky-high rents and eye-popping investment sales prices seen in core, coastal cities; however, the Midwest multifamily market is still one of considerable strength and opportunity.

Indeed, with the higher cap rates and steady rent growth found in the region, the Midwest offers higher returns in asset values than the nation's primary markets, especially as the sector approaches affordability ceilings in places like New York and San Francisco.

Institutional investors, pension funds, international investors and the larger REITs have long been in hot pursuit of multifamily assets in core, primary markets. The results of their bidding wars are often compressed cap rates, which those investors don't mind because they have relatively low yield thresholds.

Cap rates for class-A apartment communities in New York ranged from 3.3 percent to 4.1 percent in the first quarter, according to JLL, a commercial real estate firm. For San Francisco, the range was very similar, from 3.6 percent to 4.3 percent.

By contrast, class-A and class-B communities in the Midwest haven't typically attracted the attention of the large institutional investors and usually sell for cap rates that are at least 100 basis points higher, making the region more accessible for private investors. Considering that Midwest owner/operators and their investors also have access to the same historically low financing available to the major players on the coasts, the stage is immediately set for higher yields and immediate cash flow.

Plenty of runway for rent growth

Rent growth in the larger markets has overshadowed that in the Midwest, yet there is reason to believe it is beginning to cool in the bigger cities.

For example, San Francisco's annual rent growth dropped 520 basis points, from 9.9 percent to 4.7 percent, in the second quarter of 2016 when compared with the same period one year earlier, according to MPF Research, a multifamily market research firm. Also, Bloomberg News recently reported that Equity Residential has decreased its revenue forecast and AvalonBay Communities has seen increased concessions, in part because of softening in the San Francisco and New York markets.

Meanwhile, rent growth in Midwest markets continues at its nice, steady annual pace, traditionally in the 3.0 percent to 5.0 percent range. And the region appears poised to have ample runway for continued growth.

The average rent in San Francisco, across all asset types, is $3,900 a month, while in Kansas City the rate is just $1,000 a month, according to Rent Jungle, an apartment internet listing service.

Using a standard qualification formula in which a prospective renter has to make a monthly gross income that is three times the rent, a San Francisco resident would have to make in excess of $140,000 a year to qualify for an average apartment. In Kansas City, the annual income would have to be just $36,000.

Now, consider the impact of a 5.0 percent increase in rent. In Kansas City, that would translate to just $50 a month and would require only $1,800 in additional annual income for a new resident to qualify. In San Francisco, the same increases would amount to nearly $200 a month and more than $7,000 in annual income.

Those numbers provide a good sense of how increasing rents may be a little easier in the Midwest in the future, especially when one considers the region's sizable segment of "renters by choice" who have the capacity and willingness to pay more for a quality product and cutting-edge amenities.

The Midwest multifamily market may never experience the headline-grabbing stats that its coastal, primary counterparts often do. However, it's still an immensely attractive environment for private equity and similar investors.

In short, it may not have a lot of sizzle, yet it's got plenty of steak.