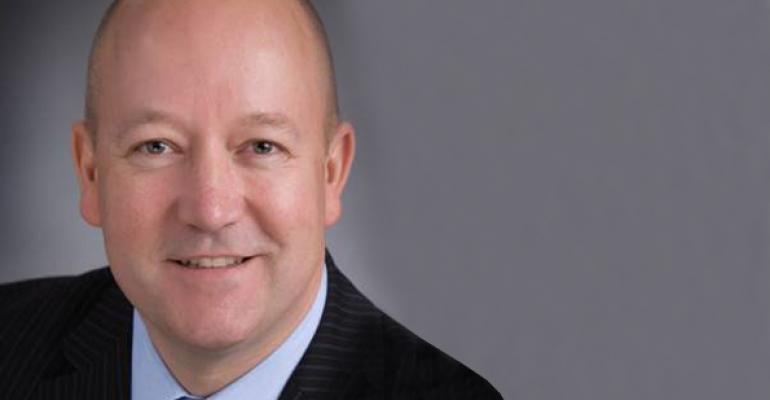 For many years, Knoer was the CIO at Higgins Development Partners, the Chicago-based office and industrial development platform. Prior to his position at Higgins, he was a senior acquisition specialist at J.P. Morgan Partners in London, investing capital for a global opportunistic real estate fund. He started his real estate career with Hines Interests in Chicago.

NREI talked to Knoer about investors thoughts about continued strife in Washington, D.C. and what he finds interesting about the senior housing sector. An edited version of that interview follows.

NREI: How will the continued economic drama affect investors’ attitudes?

Dietrich Knoer: Whether you call it fiscal cliff, sequestration or political gridlock, the bottom line is that uncertainty has an impact on financial markets and real estate investments. That being said, domestic and international capital flows are strong, particularly in the gateway markets along the coasts where investors presume to have high levels of future liquidity.

I think that most investors have accepted the idea of a slower but steady economic growth over the next several years. The uncertainties of the economic drama are somewhat priced into the market, and as much as it is holding back a stronger recovery in the office market, it might well be fueling the ongoing investor appetite for multifamily rental housing, for example. Investors’ attitudes are impacted by economic uncertainty, but let’s not forget that some real estate sectors, such as seniors housing and healthcare, are driven by demographic shifts with little correlation to the fiscal cliff or spending cuts.

NREI: What will be the biggest issue to impact investors attitudes as we move into the second quarter of 2013?

Dietrich Knoer: The political gridlock will be the biggest issue for several years to come. I believe that investors will continue to look for current yield and capital appreciation opportunities, applying underwriting criteria that are much stronger and are more focused on real estate fundamentals, and less on financial engineering. I don’t want to identify one “biggest issue” for the second quarter of 2013, but I believe that with every month we get further into 2013 and 2014, investors are starting to focus on what impact higher interest rates will have on future capitalization rates and asset values.

NREI: Take one of the sectors REDICO handles—office, mixed-use, medical and life sciences—and tell us what you think is a particularly interesting trend right now in that sector.

Dietrich Knoer: As the new CIO at REDICO, I am very impressed with the depth and scope of our portfolio on a national basis across the office, retail, senior living communities and health-care sectors. We are working on complicated recapitalizations of office buildings where our fully integrated platform can deliver solution for our partners. We are developing new retail centers in several states. But the demographic and regulatory trends in the seniors housing and health-care sectors are most interesting to me. The consolidation that is taking place among operators of seniors housing facilities and the merger activity among health-care systems is fueling capital flow and forcing ever increasing efficiencies.

With our senior living operating platform, we are focused on delivering affordable services at a high level to the aging population in America. Changes in delivering health care to each patient combined with the growing influence of technology in the health-care sector, are trends that create new real estate opportunities every day. We are focused on keeping up with those trends to deliver real estate solutions to our tenants and investment opportunities for our partners.

Tony Quo Vadis recently resigned as CFO for personal and family reasons. Routly will serve on an interim basis. She has 15 years of experience in accounting positions with a number of public and private companies.

LaSalle Investment Management hired Elisabeth Stheeman to serve as the firm’s global COO. Kim Woodrow served as COO for 31 years and will retire at the end of 2013. Stheeman joins as of April 1 and will be based in London.

Stheeman has more than 20 years of extensive operating experience in a sophisticated global institution. She is a veteran of Morgan Stanley in London, where she most recently held the position of COO in the firm’s investment banking division and focused on real estate and natural resources.

Davis Takes Over as COO at UDR

Davis has been with UDR for 21 years and has held several leadership roles.

Auction.com named Sheryl Roland executive vice president of human resources. Most recently, she held the same role at The ACTIVE Network, the leader in activity and participant management solutions.

Roland oversees talent acquisition and management, total rewards and employee relations on a global basis, and will lead the people initiatives and strategies that serve Auction.com and its more than 700 employees. She is based in the company’s Irvine, Calif. headquarters.

Lloyd, who has also been named a principal of the firm, will handle all aspects of leasing for the privately held real estate investment and operating company. He will be based in San Diego.

He has more than 22 years of experience in management of institutional quality commercial real estate assets and joins Parallel Capital following a 15-year career with the San Diego office of RREEF Real Estate, most recently as director of office and industrial asset management.

Crowe was most recently a vice president with the Rockville, Md.-based company, which provides fully-integrated commercial real estate services for the health science industry in the Washington, D.C. and Baltimore metropolitan areas. Crowe began working at Scheer in 2006.

In his 38-year career Lindeman has completed more than $200 million worth of transactions and has represented more than 250 clients including AEG, Colgate Palmolive, McDonalds Corp., McDonnell Douglas and Sprint Corp.

WNC Brings Back Advani as SVP

WNC welcomed Anil Advani back to the firm, which is a national investor in real estate and community development initiatives

Prior to joining WNC, Advani served as managing director with Red Capital Group, working in the company’s tax syndication group.

Pennrose welcomed Lee Reedy as vice president of marketing for the real estate development and management company, which focuses on multifamily communities

Reedy comes from ACTS Retirement-Life Communities Inc., where she was corporate director of national marketing.

Dailey will be responsible for the identification, development, and growth of new business opportunities in the multifamily sector. Dailey has more than 15 years of industry experience, including branding and promotional planning, repositioning, developing marketing strategies, and contract negotiation within the multifamily sector. Previously, she was executive vice president at Incore Residential.

Avison Young welcomed John Ryan III to the company’s transaction services platform as a principal. He will be based in New York City.

Ryan comes to AY from Jones Lang LaSalle, where he was a managing director. He has 23 years of experience in tenant and landlord representation. Notable deals include representing Bank of America in the company’s 1.6 million-sq.-ft. lease and joint venture with the Durst Organization at One Bryant Park, as well as the bank’s 320,000-sq.-ft. lease at 50 Rockefeller Plaza.

Since beginning his career in the real estate securities industry in 1984, Rogers has been involved in creating and managing more than 100 investment offerings totaling in excess of $3 billion, including tenant-in-common, DST and multiple publicly registered non-traded REITs. He spent 20 years as an attorney specializing in real estate taxation, real estate and securities law, primarily with law firm Hirschler Fleischer in Richmond, Va.

Eilers has worked for 23 years in commercial real estate, most recently for Newmark Grubb Knight Frank as senior vice president, and previously as vice president of Brokerage for Shoptow-James, Inc/L.J. Melody & Co., prior to its merger with CBRE Group Inc. Some of his recent work includes a project named Heath Brook, in Ocala, Fla., a 900-acre multi-use development.

Meyers joins GFM from Stockton Real Estate Advisors of Philadelphia, where he served as vice president and was active in originating and underwriting commercial real estate assets for investment opportunities.

Eastern Consolidated welcomed Mark Schnurman to the firm as director of sales and training. In this newly created role Schnurman will manage sales talent and handle recruiting and training as the firm continues to expand.

Prior to joining Eastern, Schnurman was executive vice president and director of business development for GFI Capital Resources, a diverse real estate and financial services firm.

Sherman was a founder and principal with MHCA, where he led or was involved in more than $4 billion of multifamily investment sales and debt and equity financing transactions. Chase, who co-founded MHCA, completed over $7 billion of multifamily asset and land transactions since 2000, including sales and debt and equity financings. Fentin advised clients on over $1 billion of structured financings, including construction and mezzanine loans, preferred and equity investments and pre-sales.

Nicholson will lead Cassidy Turley’s Houston industrial team. He joins from Transwestern, where he was senior vice president. He began his commercial real estate career at Grubb & Ellis, and there he was among the top 10 industrial brokers nationally in 2007 and 2008.

Elias will provide company brokers with property analyses and long-term projections for leasing terms through a total line-by-line cost basis. In addition, he will oversee the compilation of data for quarterly, mid-year and annual reports. Prior to joining CBC Alliance, Elias spent 16 years as a senior financial analyst for Cushman & Wakefield.

Etienne will arrange debt financing for all types of commercial real estate assets, including multifamily, retail, and office and industrial properties. Prior to joining MMCC, Etienne worked with Fountain Realty Group as a commercial leasing associate and as an analyst with Deloitte Consulting LLP, both in New York.

Bryan Cave LLP welcomed Sonia Kaur Bain to the law firm’s New York office as a partner. She will practice within the real estate group.

Ruggiero previously served as assistant counsel of the firm, was primarily involved in lease negotiations, acquisitions and dispositions, bankruptcy claims, and mortgage financings. In his new post, he will broaden his responsibilities to encompass virtually all legal issues impacting the full-service real estate company.

Prior to joining Resnick, Ruggiero served as a law clerk Hass & Gottlieb in Scarsdale, N.Y., where he facilitated real estate purchase-and-sale processes, including bankruptcy and credit-related issues for clients.

Massey Knakal recently honored the top producers of the firm at their annual award ceremony.

James P. Nelson, Stephen P. Palmese, Thomas A. Donovan and Paul B. Smadbeck were among those named top salespeople of the year. Additionally, Jill Lovatt was named retail leasing agent of the year and Morris Betesh was named agent of the year within the capital services division.

Donna Abood, a graduate of Florida State University's College of Business, has been named to the school’s hall of fame.

Abood is chairman and founding partner of Colliers International South Florida. In her 28-year career, she has represented more than 50 million sq. ft. of office buildings on behalf of owners and completed hundreds of transactions on behalf of tenants. Abood has been active with the university since graduating in 1981.

Managing Directors Chris Butler and Chad Rupp won the NAIOP Best Broker Team award, and BOMA honored office properties of One & Two Urban Centre and Tampa Commons, both leased and managed by JLL, as top properties of the year.