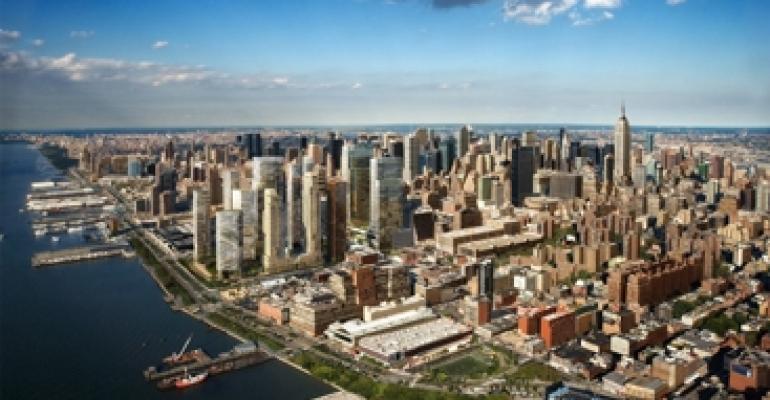 When developers from the Related Cos. surveyed the 26 acres on the west side of Manhattan that represent the largest undevelop ed tract in New York City, they saw beyond the stored rail cars and the tracks that guide trains to Hudson Yards from Penn Station. What the developers saw, instead, were digerati — the elite groups of digital wizards who populate the offices of Google and other computer firms in the neighborhood.

They saw thousands of apartments and condos, new corporate headquarters, and retail shops. And the labor and risk it would take to transform the acreage into a state-of-the-art mixed-use development would be worth the risk, in the developer’s calculation, according to Jay Cross, president of Related Hudson Yards, which is partnering with the Canadian firm, Oxford Properties Group.

Related now is in the pre-construction phase of the $15 billion, 15-year project. It is demolishing the Metals Purchasing Building and removing small amounts of soil as part of the preparatory work at the brownfield site, an industrial area requiring cleanup, before development can begin early in 2012.

The work will be tricky, involving the construction of platforms over the rail yards. “Think of the trains as being in the basement of your house,” says Cross. “It’s like Park Avenue, really, all the trains going north under Park Avenue are underneath all those buildings. So in that sense it’s been done before.”

It’s the most ambitious project Cross has ever undertaken “by a country mile,” he says, even when taking into account the New Meadowlands stadium, the American Airlines Center in Miami, and other developments.

But the developer sees healthy returns down the road, and the company aims to attract corporate tenants or buyers to the site, perhaps companies that want to consolidate their offices in a single, state-of-the-art space.

“Our strategy is two-fold. In the early days, we want to try to get large commercial users to come because of the extraordinary amount of infrastructure that we have to put in, namely the platforms over the yards. So, what we’re saying to large commercial users in town is that we will build the headquarters buildings for you at our cost, whether you want to lease or own,” says Cross.

The strategy is to launch the commercial component early, by offering bargain rates and deals, and defer the higher returns until the residential side of the development gets under way.

A grand plan, with incentives
In all, the project will encompass more than 12 million sq. ft., with approximately 5,000 apartments, 6 million sq. ft. of office space, at least one hotel, a public school, and a cultural building. The master plan also calls for 750,000 sq. ft. of retail space. The retail will take the form of a podium of four floors or higher, surrounded by three office towers.

The developers have considered both brand and boutique hotels for the site, which could accommodate up to three hotels. “We’ve considered a five- star hotel, which would be 250 to 350 rooms. We’ve also considered a convention hotel, 1,000 rooms,” says Cross. Discussions have been held with potential operators.

Related’s joint venture was created specifically for the Hudson Yards project. The firm won the proposal call to develop the property as a result of a Metropolitan Transit Authority (MTA) call. Related’s first partner at the time of the award was Goldman Sachs, and last May, the developer brought in Oxford as an investor.

The Canadian company, predominantly an office specialist, expanded its U.S. footprint as it partnered with Related to capitalize the venture. The two won’t have to turn to banks for funding until a later stage in the development.

Subtracting the rail yards, the mixed-use model may look familiar. “It’s not dissimilar to the Time Warner Center in New York, but bigger,” says Cross. Related built the Center, which opened in 2004. “It’s been an outstanding success,” says Cross of the earlier development. The condominiums are in demand, and the project has had a far-reaching impact in improving its Manhattan surroundings, he adds.

In a plan endorsed by New York Mayor Michael Bloomberg, the Hudson Yards apartments will include at least 460 affordable units. The developer is following New York State’s 80-20% ratio of market rate and affordable housing.

In terms of incentives, the city is doing a lot for the site, says Cross. “They’re building the number 7 subway, which will come right to our front door.” The line is under construction and scheduled to open in 2014. Penn Station is a five-minute walk from the yards. The city is also providing substantial tax abatement incentives, such as a 40% reduction in taxes for the first 5 million sq. ft., over 20 years.

Bursting with ‘dot coms’
New York City has good reason to support the project, according to the developer. “The city realized as much as 10 years ago that bringing the subway to the west side was going to open up those areas for both commercial and residential development. And so the city is paying for the subway, even though it’s part of the MTA infrastructure. “ The city has also invested in nearby streets, and is building a three-block park.

The rail yards have long been a stumbling block to developing the city’s west side, although to the north, Clinton and Hell’s Kitchen are developing rapidly.

“Once we start going, then everything around us will start to go with us,” says Cross. Hudson Yards’ 12 million sq. ft. is likely to trigger development of 40 million sq. ft. in the vicinity, he notes. “This neighborhood already is growing at twice the rate of Manhattan. It enjoys high income levels equivalent to the rest of Manhattan. It’s a very happening neighborhood within the context of New York.

In particular the west side “digerati” are a highly desirable demographic, he says. “It’s a Generation X-er that is very computer literate.” The digerati are unusually single, with about 70% nonfamily households compared to Manhattan in general, with 50% family households. “But they’ve got the same income, so you end up with a more mobile population that has slightly higher disposable income because they’re not putting children through school, etc. So it’s a very young crowd that is growing rapidly.”

Google has its biggest presence outside of California in the same neighborhood, Cross adds. Dot com and tech companies have sprouted across the west side, along with creative firms in the retail and fashion industries.

“This part of town is definitely going to come on strong,” says Cross. “It’s just a question of how quickly.”