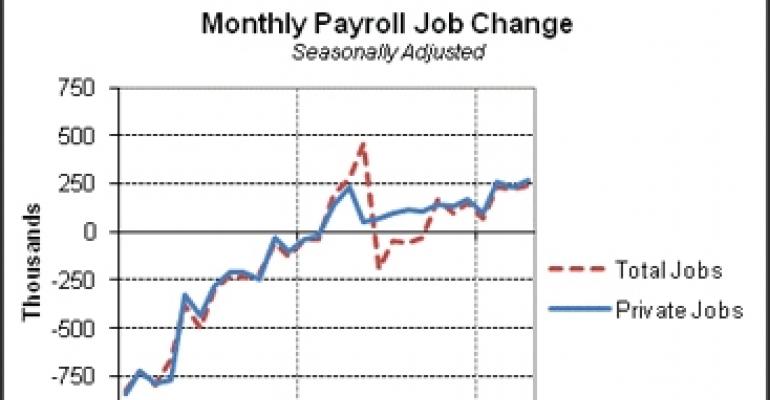 Better-than-expected hiring by U.S. private employers in April could blunt some of the negative sentiment that had been building, a good sign for the commercial real estate markets, says Bob Bach, chief economist for Grubb & Ellis.

The U.S. Labor Department reported Friday that the number of nonfarm payroll jobs rose by 244,000 in April, the largest increase in 11 months. Economists had expected a gain of approximately 185,000.

Led by gains in the retail sector, the private sector generated 268,000 new jobs, the best showing since February 2006. Government payrolls shrank by 24,000.

“The report of better-than-expected hiring last month comes at a time when other indicators suggest the economy might be losing steam,” says Bach.

The gross domestic product of the United States expanded at a tepid 1.8% annualized rate in the first quarter.

Meanwhile, the Institute for Supply Management’s non-manufacturing index registered 52.8% in April, 4.5 percentage points lower than the 57.3% notched in March. A reading over 50 indicates that more firms are expanding than contracting.

Total employment gains for February and March were revised upward by 46,000, meaning that employers have added an average of 233,000 in each of the last three months, a healthy level of hiring, according to Bach.

“The fact that retailers and restaurants are staffing up shows confidence that consumer spending — which accounts for 70 percent of GDP — can be sustained despite recent increases in gas prices,” says Bach.

The news, as usual, is not all good. The Bureau of Labor Statistics’ companion survey of households revealed that April’s unemployment rate increased to 9% from 8.8% in March, and the number of people saying they had not worked in the last month increased by 191,000.

“Although that is cause for concern,” says Bach, “the establishment survey is based on a larger sample and is thus viewed as less volatile than the household survey.”

There are other nagging concerns in the U.S. economy. Initial unemployment claims increased by 43,000 to a seasonally adjusted 474,000 in the week ended April 30, the Labor Department reported Thursday.

The prior week’s figure was revised to 431,000 from an originally reported 429,000. Many economists believe that the labor market improves only if first-time claims for unemployment benefits stay below 400,000.

There also seems to be a wide gap between the April job numbers released by the Bureau of Labor Statistics and data generated by ADP Employer Services.

The ADP figures indicated that employment increased by 179,000 in April, much lower than the 244,000 gains in nonfarm payrolls as reported by the Bureau of Labor Statistics.

“No, the numbers don’t quite jive,” says Victor Calanog, chief economist for Reis, “and I fear that ADP catches trends sooner than the Bureau of Labor Statistics.”

That could mean downward revisions to April’s nonfarm payroll numbers in the next few months, adds Calanog. “I suppose we’ll see.”