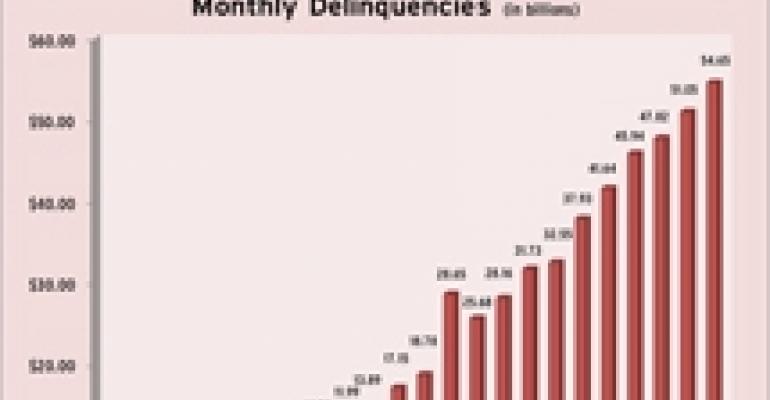 CMBS Delinquencies Continued to Grow in May

The delinquent unpaid balance for CMBS rose in May, according to two industry reports.

CMBS delinquencies continued to grow in recent months, according to reports from Trepp LLC and Realpoint LLC, two research firms tracking the sector.

In April, the delinquent unpaid balance for CMBS rose $3.6 billion, up to $54.65 billion from $51.05 billion a month prior, according to Horsham, Pa.-based Realpoint.

Overall, the delinquent unpaid balance is up 219 percent from a year ago and is now more than 24 times the low point of $2.21 billion in March 2007. The distressed 90+-day, foreclosure and REO categories grew in aggregate for the 28th straight month—up by $2.14 billion from the previous month. The total unpaid balance for CMBS pools reviewed by Realpoint for the April remittance was $790.93 billion, down from $798.22 billion in March.

The delinquency ratio for April of 6.9 percent (up from the 6.4 percent reported for February) is more than three times the 2.07 percent reported in April 2009 and 24 times the Realpoint recorded low point of 0.28 percent in June 2007.

Realpoint maintained its projection for the delinquent unpaid CMBS balance, which it expects to reach between $60 billion and $70 billion by mid 2010. The firm also projects the delinquency percentage to grow to between 8 percent and 9 percent through mid 2010 and potentially surpass 11 percent to 12 percent under more heavily stressed scenarios through the end of the year.

By property type, in April, retail loans topped multifamily loans as the greatest contributor to overall CMBS delinquency, at 1.7 percent of the CMBS universe and 24.6 percent of total delinquency. The retail default rate increased to 6.20 percent, up substantially from 2.3 percent one year ago. Realpoint expects retail delinquencies to continue to increase throughout 2010.

Meanwhile, in its monthly report, Trepp said that the CMBS delinquency rate had reached a record 8.42 percent in May, up from 8.02 percent in April. The delinquency rate one year ago was just 2.77 percent. According to the firm, for the last eight months the rate in increase in delinquencies has been between 37 and 49 basis points per month. The lone exception was this past February where the rate jumped by just 22 basis points.

By property type, the lodging and multifamily sectors have the highest delinquency rates followed by retail, office and industrial. The lodging delinquency rate is nearly three times as great as that for the retail sector.