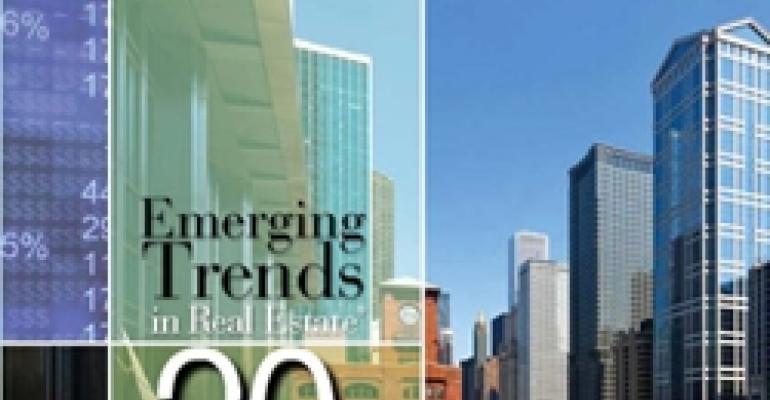 The outlook has dimmed for commercial real estate, according to the Emerging Trends in Real Estate 2012 report released by PwC and the Urban Land Institute at the ULI Fall Conference in Los Angeles.

The research, the product of 950 surveys and interviews with commercial real estate investors, reveals more caution in the industry compared with a year ago. Last year, the report talked of an industry recovery playing out in an “era of less,” which presented its own challenges. But at least the theme was about the industry rebounding. This year, the report signals that the recovery may be on hold for all of 2012.

In detailing the report’s findings, Jonathan Miller, the report’s principal author, and Stephen Blank, a senior resident fellow for real estate finance with ULI, outlined a litany of challenges that have been putting pressure on the sector. They pointed to the persistently high unemployment rate, which is partially a product of U.S. jobs being shipped to lower cost markets not just in manufacturing, but services as well. In addition, technology continues to increase productivity, putting further downward pressure on jobs.

Other issues include the global financial morass, exemplified by the sovereign debt crises in Europe and what those might mean for international banks. And, at home, the dysfunction in Washington as the Democrats and Republicans fail to find any middle ground has generated further uncertainty for businesses.

“The next year is not going to be as strong as our industry would like,” Miller said when presenting the results. “It’s going to be a situation where we’re facing a long grind.”

“The rest of the real estate landscape—commodity properties, things in the suburbs—those are still not doing particularly well,” Miller said. “The big issue is: Where is demand? Demand is just not very robust and we don’t expect it to ramp up in any great dimensions in 2012.”

“For real estate investors, it means declining return expectations,” Blank added. “If you invested in 2009/2010 in prime gateway markets, it’s time to take some chips off the table. We don’t see much in the way of appreciation until 2012 or possibly 2013.”

Underscoring the caution in the sector, the overall buy sentiment slipped from a year ago—which is not the norm when the economy is recovering. The buy/hold profile from respondents “looks like 2009 rather than like a market in a rebound scenario,” Blank said.

Despite the overall cautious sentiment, the outlook for 50 of the 51 markets surveyed by investors did improve compared with last year’s report. Ironically, the only market where sentiment declined was Washington, D.C.—the top overall market in the survey. The other top 10 markets in the survey include Austin, Texas; San Francisco; New York City; Boston; Seattle; San Jose, Calif.; Houston; Los Angeles and San Diego.

By property type, apartments have the brightest outlook, followed by industrial, hotels, office and retail.