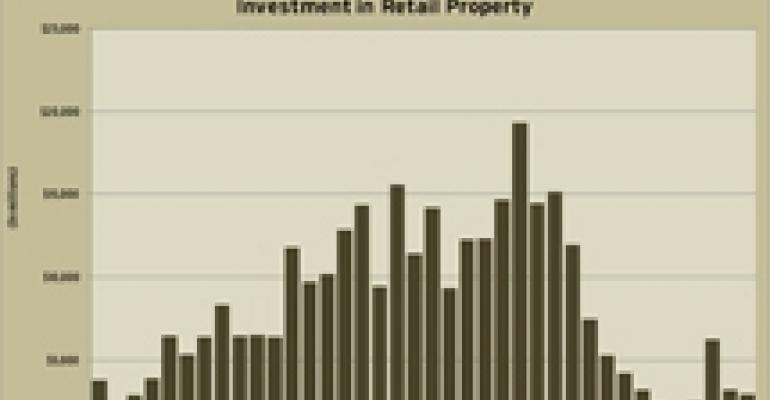 Sales of significant retail properties (transactions greater than $5 million) slipped to $2.9 billion in the second quarter of 2010, down 9 percent from $3.2 billion in the first quarter. Overall it is the seventh time in the last eight quarters that the volume of investment sales on retail properties has been below $5.0 billion, according to RCA, indicating that the overall investment sales climate remains cool.

According to the report, “The retail sector exhibited significant variation in cap rates on closed sales over the first part of this year. Some of the highest quality retail assets commanded rates below 7.0 percent, while some distressed assets sold with cap rates close to 10.0 percent.”

RCA also noted that big markets including Los Angeles, New York, Chicago and San Francisco have been the most active areas for deals so far in 2010. Other areas with some activity include Tampa, San Diego, and Southern Florida metros.

The profile of buyers also varied. According to the report, “Non-traded REIT Inland Real Estate Group’s large portfolio acquisition of strip centers across the Southeast region pushed it to the top of the most active year-to-date retail buyers list, ranked by volume. Inland was trailed closely by public REIT Simon Property Group, which has yet to close on its acquisition of Prime Outlets, [but] did acquire partial interest[s] in several other major properties. Nonetheless, the list of top buyers was diverse, containing several equity funds and institutional investors.”

Strip center sales rose to $1.7 billion in the second quarter of 2010, up by 19 percent from the first quarter and the number of properties sold increased by 36 percent. Pricing for both offered and closed strips fell during the first half of the year from $134 per square foot in January to $117 per square foot in June. Cap rates on strip centers hit 8.2 percent in June—down from a peak of 9.0 percent in November 2009.

Meanwhile, sales of retail malls and other properties totaled $1.2 billion in the second quarter of 2010, down by 33 percent from the first quarter. Cap rates for mall and other retail properties have remained stable over the first half of 2010, varying only slightly around 7.9 percent. According to RCA, “This stability has held since mid-2009, after cap rates rose in the first half of the year.”