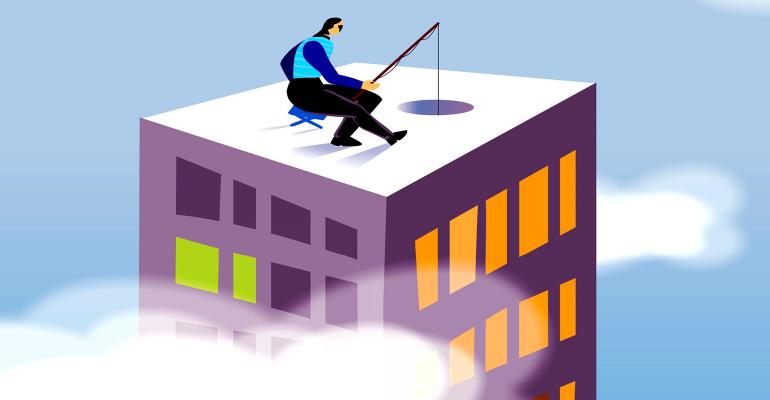 While there is a general sense that cap rates will rise, respondents overall remain optimistic about the prospects for the space.

Despite the overall consensus that commercial real estate is in the late stages of its current cycle, investors in the office sector continue to see strength in the sector. Expectations for rents and occupancies remain bullish. And while there is a general sense that cap rates will rise, respondents overall remain optimistic about the prospects for the space.

Those were among the findings in NREI’s fourth annual research survey aimed at gauging sentiment about the office sector for the coming year.

Respondents were asked to rank the relative strength of their region on a scale of 1 to 10. The West (8.2) led the way, followed by the South (7.9), the East (7.4) and the Midwest (6.8). The scores for the East, Midwest and South all rose from 2017, while the score for the West remained flat. The West has been the top market in each of the four surveys NREI has completed on the office sector.

The state of investment

Respondents were asked to estimate cap rates in their regions and nationally and generated figures of 6.2 percent and 6.3 percent, respectively. Those numbers are a bit lower than market statistics indicate. For the fourth quarter of 2017, Real Capital Analytics (RCA) reported an overall office cap rate figure of 6.7 percent based on total volume of $37.8 billion in deals.

For each of the four years NREI has conducted this survey, a majority of respondents has answered that they’ve expected cap rates to rise in the next 12 months. In fact, office cap rates did rise some in the past year. After hitting a low of 6.4 percent in the third quarter of 2016, office cap rates have hovered in the 6.6 percent to 6.7 percent range since, according to RCA’s figures.

The numbers are similar at the national level, where 75 percent expect cap rates to increase (up from 73 percent in 2017), while 14 percent expect them to decrease (unchanged from a year ago) and 10 percent expect no change.

In terms of respondents’ own plans, the numbers in this year’s survey matched last year’s exactly. A little more than half of respondents (57 percent) again said they expect to “hold” properties in the sector in the next 12 months. About one-fifth expect to sell (21 percent) and a similar number is looking to buy (22 percent). Those numbers have been consistent in each of the last three surveys.

Respondents were also asked how they see various financing aspects changing in the next 12 months. For the second consecutive year, an overwhelming majority expect interest rates to rise (87.8 percent this year vs. 91.1 percent in 2017).

When it comes to the risk premium, the spread between the risk-free 10-year Treasury and cap rates, respondents were split, with 43.7 percent expecting an increase while 42.7 percent expect it to remain the same

Two factors that a majority of respondents do not expect to see much movement on are loan-to-value (LTV) ratios and debt service coverage ratios (DSCR). More than three-fifths (65.9 percent on LTV rates and 68.1 percent on DSCR) expect those to remain flat. In total, 46.5 percent of respondents to this year’s survey expect loan terms to tighten. That’s virtually unchanged from 46.1 percent who answered that way in 2017. In addition, 39.9 percent in this year’s survey said loan terms would remain unchanged, while only 13.6 percent expect them to loosen.

Respondents were also asked about the outlook for central business district (CBD) office properties in comparison to suburban complexes. Responses were similar for both property types and also mirrored overall sentiment for the sector. In both cases, about two-thirds of respondents expect cap rates to increase (71 percent for CBD, 76 percent for suburban), while less than one-fifth expect cap rates to decrease (16 percent for CBD and 14 percent suburban). In both cases, the percentages of respondents expecting cap rate increases was up slightly from 2017.

The New York metro led the drop in urban sales volume with a 37 percent decline, which Bitner attributes to fewer assets on the market and high pricing. He notes that some buildings had already traded two or three times during the current cycle, and an abundance of liquidity in the market allowed trophy asset owners to refinance rather than sell.

In addition, many institutional investors became wary about asset pricing due to the willingness of aggressive investors, including foreign players, to pay top dollar, making it hard to compete on bids.

“Investment activity continues in the suburban office market, and yields are liable to be as good or better than CBD markets,” Bitner notes. “People tend to forget that 70 percent of office inventory nationally is in the suburbs, because more people live and work in the suburbs than in urban centers.”

Expanding job growth is creating office demand in suburban submarkets that have never recovered from the recession. Suburban markets in the District of Columbia metropolitan area, for example, are showing signs of a comeback, according to Gerry Trainor, executive vice president for D.C. capital markets with real estate services firm Transwestern. He notes that an upswing in performance of two Northern Virginia submarkets, where rent growth is 15 percent, may signal a comeback regionally.

Speculative office construction—as a percentage of supply underway—is expected to be at the highest level it has been in years in 2018, according to commercial real estate data firm CoStar.

Still, some experts say there is enough demand out there for new, quality space—even as the national vacancy rate has not seen a significant drop since 2010, and there is an uptick in expected deliveries this year.

Peter Muoio, chief economist at Ten-X, says he is not as concerned about too much speculative supply as he is about the overall supply in the markets that recovered well after the recession—typically, gateway cities including New York and San Francisco that have been seeing growing economies, an influx of capital and strong office job growth.

Outlook for occupancies edged up slightly from previous surveys. The majority of respondents (69 percent) said they expect occupancy rates to rise in their region in the next 12 months. That’s up from 65 percent in 2017 and 2016. However, about one-fifth, or 18 percent, said they think occupancy rates will decline (vs. 23 percent in 2017). And about 13 percent said they will remain flat.

The picture was similar on rents. Sentiment became slightly more bullish than it was in 2017. Overall, nearly four-fifths of respondents (78 percent) expect rents to rise in the next 12 months, while only 13 percent expect them to decrease. That figure is up from 73 percent in 2017 and 77 percent in 2016. In 2015, 83 percent said they expected rents to rise and only nine percent said they expected them to fall.

With reporting by Patricia Kirk and Mary Diduch

Survey methodology: The NREI research report on the office real estate sector was completed via online surveys distributed to readers in March. The survey yielded 321 responses. Recipients were asked what regions they operated in (and were allowed to select multiple regions). Overall, 41.8 percent said they operated in the West, followed by the East (40.3 percent), South (39.3 percent) and Midwest (33.7 percent). Half of respondents (50.5 percent) hold the titles of owner, partner, president, chairman, CEO or CFO. The results from the current research were compared against prior studies completed in early 2017, early 2016 and late 2015. The 2015 survey yielded 216 responses, the 2016 survey yielded 371 responses and the 2017 survey yielded 274 responses.