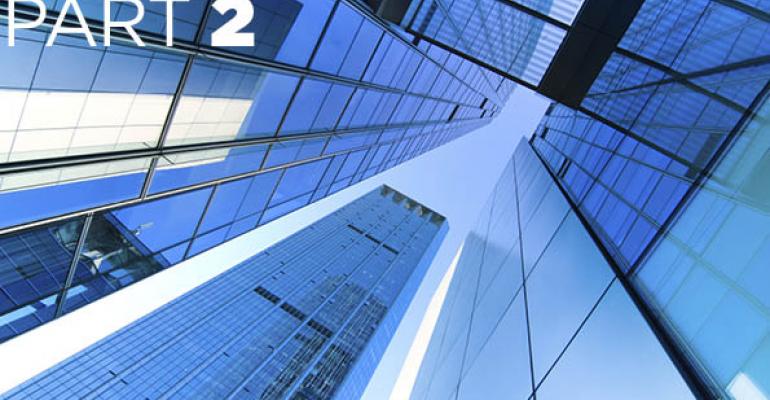 Lingering caution is a trend that the office sector across most markets just can’t seem to fully shake. That hesitation is due to a number of factors, including shifting preferences in how and where people choose to do their work. At the same time, corporations are still highly focused on efficiency—doing more with fewer people and utilizing less space. The end result is that many companies continue to have a diminished appetite for space, and in some cases, are still shrinking footprints.

Overall, respondent views are fairly evenly split on which regions are leading and lagging in the broader recovery. However, sentiment is slightly more positive in favor of the West and Mountain Pacific region. When asked to rate the strength of the different regions of the country on a scale from 1 to 10 with 10 being the highest, the West/Mountain Pacific region posted the highest mean score of 7.8, followed by South/ Southeast/Southwest at 7.2, East at 7.1 and Midwest/East North Central/West North Central at 6.5 [Figure 3].

That sentiment is supported by industry data as seven of the top 10 markets for effective rent growth were in California, according to Reis. The booming tech sector has played an important role in fueling growth nationally, notably in California’s tech hubs such as San Francisco and San Jose.

The recovery in California, and specifically in Los Angeles, started about two and a half years ago with positive absorption and good tenant growth, says Martin. “Over the last 18 months, we’ve seen institutional ownerships stepping on the gas relative to increasing rental rates,” he says. In fact, landlords have been aggressive in pushing rents higher even amid sporadic demand from office tenants. Some industries have been very cautious in committing to expansion, taking two steps forward and one step back as they pause to make sure their growth is on track, he adds.

Markets reliant on energy firms such as Houston have taken a step back due to falling oil prices. “Definitely, we are a little bearish in Houston right now,” says Doug Morrow, SIOR, president of Texas Overland LLC, a brokerage firm based in Houston. The outlook for 2016 is expected to be extremely slow in Houston, with rising vacancies, flat or even declining rents and a heavy load of space still left to absorb due to a high volume of sublease space coming back to the market and a wave of new construction completions.

In particular, Houston’s “Energy Corridor” on the west side of the metro has been dealing with a significant amount of sublease space and rising concessions. “That is almost wholly due to the oil prices,” says Morrow. Houston also faces the challenge of absorbing a hefty supply of new developments, with an estimated 10 million sq. ft. of office space that has been recently completed or is coming on-line. “We have seen a huge building spike in the last five years, while the rest of the country didn’t,” he says. Yet Houston has also benefited from high population growth, which has helped to boost the overall economy. So a lot of the class-B and class-B+ properties that are not reliant on energy tenants have remained quite full, with landlords able to push rents higher, Morrow adds.

Despite the stops and starts in the office sector recovery, national effective rents grew by an average of 3.5 percent year-over-year as of third quarter, according to Reis. Among the 82 markets that Reis tracks, 56 reported positive absorption and 70 posted increases in effective rents. Survey respondents also are more bullish on the outlook for rising rents. The vast majority of respondents (85 percent) expect rents to rise in their markets over the next 12 months with an anticipated mean increase of 2.9 percent. Only 10 percent expect rents to fall, while 5 percent believe there will be no change.