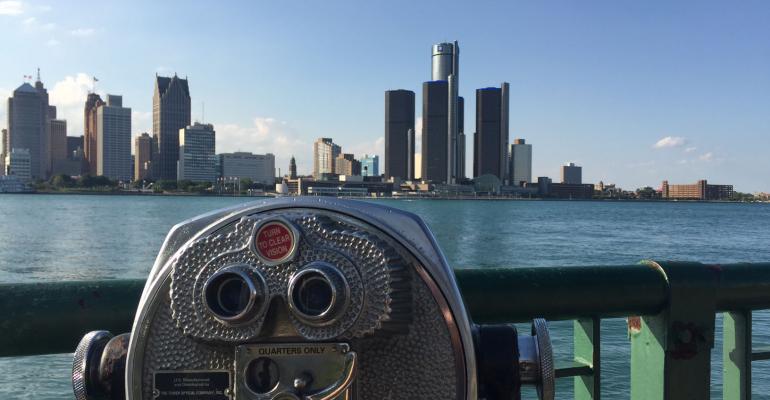 Detroit’s commercial property sectors are rebounding, albeit slowly and steadily. The automotive industry’s resurgence and new attention paid to the city by technology companies should continue to bolster markets there, and hopefully fade memories of the bleak state of things after 2008.

“Every asset class is seeing some improvement. We have close to 16 quarters of positive growth. We may not be an institutional favorite, but we are still the best kept secret for investment by other investor groups,” says Paul Choukourian, executive managing director for Detroit and Ann Arbor with real estate services firm Colliers International.

Bill Harvey, an executive vice president with real estate services provider Transwestern, would agree. He has spent many days in the last few months touring the Detroit office market with multiple groups of out-of-state investors. “Downtown Detroit office price per square foot increased over 20 percent in the last four years,” Harvey notes. High-quality office inventory in the city is in short supply, he notes.

Both experts say institutional investors, including REITs, have shirked Detroit to focus on markets that give their shareholders a greater sense of comfort.

“REITs would rather pay a lower cap return to please stock analysts, [in markets] like California and the South. REITs have left in the past 10 years, going to smile states in the South, West Coast and some primary logistic/distribution markets like Chicago [and] Lehigh Valley,” says Choukourian.

Private investors, on the other hand, including both individual high-net-worth investors and family-operated firms, are looking to get returns from property markets that are up-and-coming.

“We are predicting slow and steady growth of Detroit’s asset classes for 2017. Our biggest issue, the fear of cliffs we have fallen off of in the past, has been mitigated by restructuring of the auto industry,” Harvey says.

Office, multifamily and industrial sectors in the city are benefiting from increasing employment rates and continued business expansions in health care, technology and automotive industries. For the first time in a long time, young talent is choosing to stay in Detroit after graduating college, instead of leaving to seek work in cities like Chicago, Atlanta, New York or San Francisco.

“More people have stayed here bolstered by availability of jobs at tech companies, such as Quicken loans. And they are living downtown—there is a wait list for apartments downtown, the first time I have seen this in my life,” Choukourian says.

Employment in the city increased by 1.8 percent in 2015. According to a multifamily report from brokerage firm Marcus & Millichap, developers will complete 2,200 multifamily units in Detroit in 2016, the highest volume of new construction completed in 10 years. The city is expected to reach the end of the year with a multifamily vacancy rate of 3.1 percent (a 40 basis point increase year-over-year). Average effective rents, meanwhile, are expected to go up 4.9 percent for the year, compared to growth of 4.1 percent in 2015.

“We are seeing lots of out-of-state investors interested in multifamily in the city of Detroit, about two times per week I am getting calls about multifamily in Detroit,” says Choukourian. “Ten years ago, I couldn’t even give those away. It speaks to the improvement of the asset classes. There is a shortage of good multifamily in CBD Detroit right now.”

Detroit’s CBD is becoming a catalyst for the rest of Detroit’s multifamily sector, as rising rents there have led tenants to look to neighboring areas, he adds. “People are realizing that if you move one or two miles away, you can cut your rent by half, which is a good value. That demand will help boost development. The city’s strategy regarding blighted areas should also help boost development,” Choukourian notes, citing the Brush Park Historic District as an example.

Meanwhile, technology firms, including those focusing on self-driving cars, batteries and related fields, have been looking for office space in the city, according to Harvey. Nissan, Honda, Hyundai, Mercedes and other foreign manufacturers all have R&D divisions in Detroit, he points out.

“Detroit is a site for intellectual R&D for the automotive industry,” he notes. “University of Michigan, Michigan State and Wayne State University provide a well-educated workforce and sites for R&D testing in conjunction with the manufacturer.”

Office vacancy in Detroit has trended downward since 2010, reaching 19.6 percent in the second quarter (in 2008, the vacancy stood at 26.7 percent and in 2010 it was 32.9 percent), according to a report by real estate services firm JLL. Of the 418,334 sq. ft. of office space under construction in the city, 93.8 percent has already been pre-leased. However, there is still negative net absorption year-to-date of 201, 710 sq. ft. Twelve-month rent growth has been just 0.7 percent.

“In Detroit, there is a short supply of high-quality office inventory remaining. Older buildings that were shuttered are now being renovated, given the tight market. The Book Building, for instance, is in the midst of redevelopment. That building has not seen occupancy for many years,” Harvey says.

Detroit’s industrial sector reflects is among its greatest strength: rents for industrial space in the city grew at a respectable 7.1 percent rate over a 12-month period, JLL reports. Industrial availability rate is at 8.0 percent and net absorption year-to-date totals more than 4.5 million sq. ft.

Sources expect more positive momentum for the city in 2017. Harvey notes that Detroit went from a boom-bust cycle to being more stable and healthier after addressing capacity issues and labor issues stemming from restructuring of the automotive industry in 2008.

“In 2017, we expect more of the same slow but steady growth, and don’t anticipate any overbuilding issues,” Choukourian says.