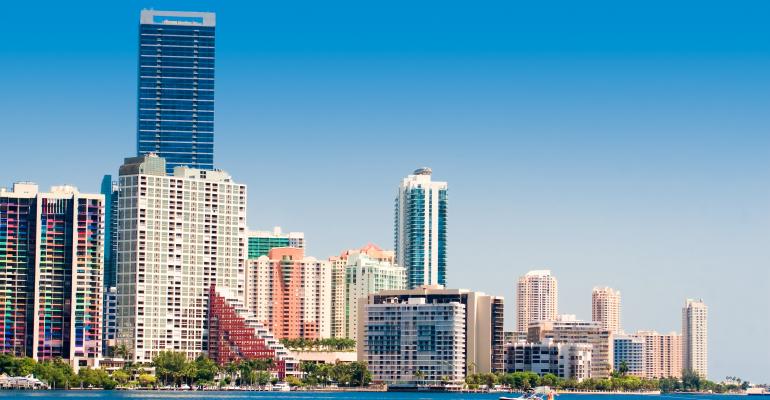 Demand has increased in recovering downtown office markets, with a lack of available space forcing investors to put in high bids for even class-B and class-C office towers.

Older office buildings in cities including Chicago, Los Angeles and Miami are being bought for above their replacement costs, with conversion plans that include residential or hotel towers. In the meantime, removing the properties off the market is pushing total office occupancies—and the resulting rent increases—even higher.

In Chicago, many class-C office buildings downtown are being snatched up for conversions to other uses. Buildings including 11 S. LaSalle, 100 W. Monroe, 101 E. Erie, the former Dearborn Bank Building on Wabash and the Roanoke Building on LaSalle have all been either converted or are in the process of being converted into hotels. Last month, residential developer Dolce Living Communities Residential bought the 115-year-old 29 S. LaSalle office building for about $13 million.

As a result, class-C office buildings in Chicago’s central business district (CBD), which comprise a 25 million-sq.-ft. market, currently have a vacancy of 12.4 percent, much lower than the 15.1 percent vacancy rate for the city’s class-A market, according to a recent report from commercial real estate services firm Transwestern. Chicago’s downtown has already lost more than 14 percent of its class-C space to conversions, pushing rents up almost 11 percent, according to real estate services firm CBRE. Affordable office space will become increasingly difficult to find as a result of the conversions, according to a fourth-quarter report from DTZ.

Andy Davidson, executive vice president with Chicago-based MB Real Estate, says that though tenants used to leasing cheaper space will suffer as rents increase, new class-A space should come on-line in the next three years to relieve some of the pressure. Supply should eventually feed on the demand, he notes. “The strength of demand for this high quality inventory, in combination with the diminishing supply of outdated low quality class-C buildings, has created a sense of growth throughout the market.”

In Los Angeles and Miami, condominiums are replacing underperforming office buildings. Jamison Services, for example, recently filed plans with the city of Los Angeles to change two of its Wilshire Boulevard office buildings to residential use. Increased demand in the Miami multifamily and hotel sectors has investors competing for any available property, including offices, in the downtown and Brickell sub-markets. Alliance RE Holdings LLC, a Brazilian-based firm, recently paid $140 million for the 600,000-sq.-ft. 777 Brickell office tower.

“Rising land prices and limited financing for new multi-tenant office construction means there is little by way of new office space across Miami-Dade,” she notes. “This leveling-off of supply, coupled with rising demand, is resulting in rising rents and decreasing tenant concessions.”

Stock Strickland, executive vice president at the local office of real estate services firm JLL, says it’s expected there will be another use for the 13-story waterfront tower at 777 Brickell, which had last sold for $44 million in 2002.

“The 777 tower sold for far beyond what it would make sense to continue to use as a class-C office,” Strickland says. “It’s rumored it will be redeveloped for multifamily. There was, in fact, so much competition for the 777 building by residential developers, there are other office buildings next door being marketed for redevelopment.”

He adds that lenders are asking all developers for higher deposits for new development, at least higher than in past recovery periods. This conservatism is responsible for the trickle of office construction plans compared to the flood of demand. Lifting older buildings off the market will put existing office landlords in even better position, he says.

“For the long term, we think it’s great to have tenants in place, but as the offices are replaced it’s going to squeeze the already tight market,” Strickland says. “Rents are definitely going to go much higher.”