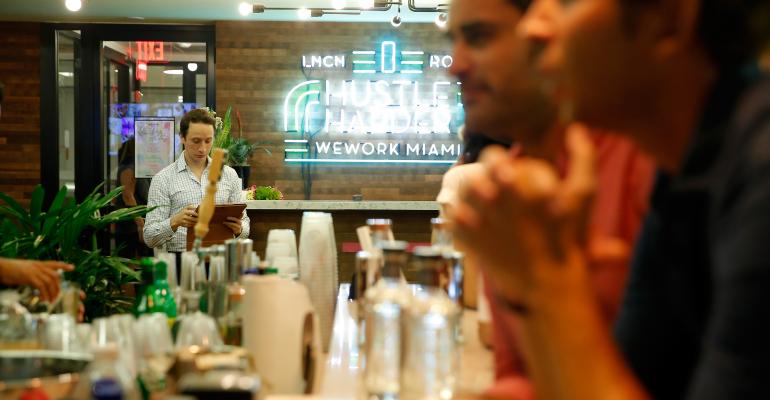 Valuations for tech and sharing-economy companies like WeWork are highly inflated compared to traditional companies with similar revenue.

Speaking at Urban Land Institute’s fall meeting in October, CoStar Managing Director of Portfolio Strategy Hans Nordby suggested that a tech bubble may be on the horizon. Explaining his comment to NREI, Norby points out that similar to what happened during the 1999 dot-com bust, valuations for tech and sharing-economy companies like WeWork are highly inflated compared to traditional companies with similar revenue.

The formula for a company’s value is based on both a company’s revenue and its revenue growth potential, which is expressed in multiples of current revenue. For tech companies, the multiple is 20 to 30 times current revenue, as tech products are scalable, easily measured and usually easy to monetize, reports The Hustle, noting that investors assume that these will eventually make a ton of money. The growth potential of traditional companies with a limited market or non-scalable products, on the other hand, is two to three times their current revenue, notes the report.

“We see that a lot in the tech sector, where a company brings a technology to market that’s disruptive to old school ways, which makes investors willing to pay more for growth potential,” says Ryan McQueeney, editor of Zacks.com, a website operated by independent research firm Chicago-based Zacks Investment Research. In WeWork’s case, the seven-year-old start-up’s office-sharing model is helping to reinvent the concept of workspace and is disruptive to real estate competitors in the office sector.

The multiple being applied for growth potential of the company, however, is even greater than most tech firms’. Now valued at $20 million, WeWork is among the most valuable U.S. start-ups, with only Uber and Airbnb worth more, according to Forbes.

A private company, WeWork does not disclose its financials, but in June co-founder Adam Neumann announced that it is now generating $1 billion a year in revenue and will launch an initial public offering, though he did not disclose when the IPO would happen, reported Reuters.

Additionally, analysts estimate that WeLive, a co-living division launched by WeWork in 2016 that offers apartments with shared common spaces and services, will generate nearly 18 percent of the company’s revenue by 2018.

Still, Nordby insists that WeWork is highly overvalued, commenting, “WeWork’s valuation is out of wack.” He points out that until recently, the company did not own any real estate. Earlier this month, WeWork acquired Lord & Taylor’s flagship department store on New York’s Fifth Avenue.

“Some tech companies like Apple and Google have real profits,” Nordby says, noting that these companies make a lot more money than WeWork. “WeWork isn’t a bad idea, but we’ve done the math and are confused. If you divide $135,000 by number of members, you get a cap rate of 2.2 percent. I can’t make sense of that.”

WeWork has about120,000 members worldwide, and based on a $16.2 billion valuation, that’s about $135,000 in valuation per member, Nordby explains. With half of member revenue income going toward expenses, the resulting net operating income (NOI) is $3,000 for each desk, or $360,000 in NOI across all WeWork markets. This begs the question: what is WeWork’s real value? Since CoStar did its calculations, however, the company’s valuation has been upgraded to $20 billion.

The current valuation per member, however, has dropped since 2015, when the company had 35,000 members and was valued at $10 billion, which works out to $434,782 per member, according to an analysis by Neil Murray, a tech analyst and founder of Nordic Web, a resource for data-driven analysis on tech firms and start-ups.

WeWork’s $5 billion valuation doubled to $10 billion within six months, following an announcement that its latest round of funding had raised $400 million, notes Murray. This generated discussion around the “B-word,” even for those strongly in the “we’re not in a bubble” camp, which Murray says includes him.

Using profit margins of Uber (about 20 percent) and Chipotle (about 27 percent) as a comparative basis, he estimates WeWork’s profit margin at a healthy 25 percent. When he applies the 20-30 times growth multiple for software companies to determine its 2015 fair market value, in the best case scenario, it comes out to $3 billion, not $10 billion.

“WeWork needs to be growing around five times faster than it currently is to come close to justifying it [valuation] any time soon,” Murray says, noting that unlike the case of software companies, its business is non-scalable in the traditional sense.

While investors may compare the company to Airbnb, Uber or software providers, Murray argues that WeWork is much more vulnerable to an economic downturn because it has extremely high fixed expenses. He notes that while WeWork’s valuation is not proof of a bubble, he feels justified in calling it “the least justified valuation since the dot-com bubble,” with the potential for being the deal that “ends up pulling the rug out from under our feet.”

With WeWork announcing its plans to go public McQueeney notes that unicorn startups (tech firms valued at $1 billion or more) that have gone public are having difficulty in the publicly-traded space. This includes Snapchat owner Snap Inc. and delivery service Blue Apron. Snap Inc., for example, has had trouble creating any momentum since going public, and its stock is trending at half the value the company had enjoyed when it was private, McQueeney says.

Leveraging equity from its valuation to acquire the 12-story, 676,000-sq.-ft. Lord & Taylor department store from Hudson Bay was a smart move on WeWork’s part, says Nordby, noting that real estate will retain more value than over-valued stock. The $850-milion deal with the Hudson’s Bay Co., which owns the Lord & Taylor chain, allows Lord & Taylor to leaseback about a quarter of the building for a pared-down store. The rest of the building will be occupied by WeWork’s global headquarters and shared-office space for members.