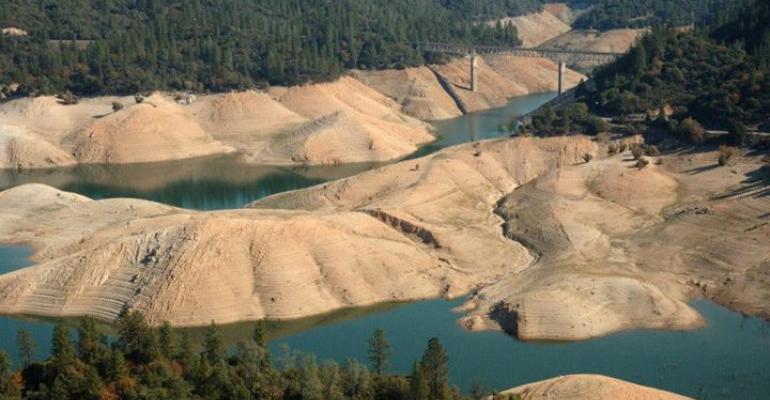 How Do CRE Building Owners Cope With California’s Drought?

With California facing one of the state’s most severe droughts on record, a State of Emergency was declared last January by Governor Jerry Brown.

But despite water-usage restrictions in place, the drought continues. Last Friday, a week before the official start of summer, the California Water Resources Control Board announced that there is insufficient water available for senior water right holders with priority dates after 1903 in the San Joaquin and Sacramento watersheds and the Delta. Meanwhile, the need for further restrictions on more senior rights and curtailments in other watersheds is being assessed weekly by the state.

How much of an impact are these water restrictions having on commercial property operation and management? NREI spoke with Tracey Johnson, CPM, LEED Green associate and director of operations in the Sacramento, Calif. office of Colliers International, and Frank Teng, vice president of energy and sustainability services with JLL, based in San Francisco, about how commercial real estate firms in the Golden State are coping. An edited transcript of that interview follows.

NREI: How are building owners and managers responding to the new round of tougher water rationing?
Tracey Johnson: Commercial real estate owners and managers in California recognize that the water shortage is a community issue, and requires sacrifices across the board. The Colliers family of clients and the team are all concerned about the drought and are supportive of conservation measures.

Frank Teng: Building owners and managers as well as corporate owners and occupiers have been improving water efficiency for years, as environmental sustainability is now almost expected for many of them. Most downtown buildings have already upgraded to low-flow water fixtures, Environmental Protection Agency WaterSense-labeled products, and are minimizing their cooling tower water usage through monitoring and control strategies. For suburban offices, there has been high attention to improving irrigation efficiency with approaches such as drip irrigation, weather-based smart irrigation control, and drought-tolerant landscaping. Also, decorative fountains and ponds have been converted to either recirculating water or municipal recycled water sources.

Some of these efforts have been cost-effective from a savings perspective, and some have longer paybacks but were done to be a good community partner. Most of the response to the past and current rationing has been very proactive, but further rationing may be difficult to comply with given how many past improvements have been made. Many clients are already instituting operational changes such as eliminating window washing, going to waterless cleaning, monitoring for leaks, and reducing irrigation frequencies. Affecting the aesthetics and hygiene at buildings is a temporary fix and hard to maintain in the long run. A recent JLL report, “California's Water Crisis and What It Means for CRE Owners,” pointed out that commercial real estate landscaping and indoor water consumption accounts for only 2.5 percent of all state water use—furthermore, indoor water use is usually only a fraction of landscaping usage.

NREI: The California Energy Commission approved standards for water appliances which will save more than 10 billion gallons of water in the first year.

Frank Teng: The new standards are mostly in line with EPA’s WaterSense standards, which many class- A buildings, LEED buildings and water-conscious corporate owners are already using. The retrofits for toilets and urinals are more expensive than for faucets, but can have decent paybacks depending on a building’s water rates and local utility rebates. The impact may primarily be on class-B and -C buildings which have not performed upgrades, as well as the residential sector. It may be a good idea for buildings to expedite their upgrades before the new standards take effect January 1. Once they are in effect, water districts and cities may not be able to offer the same rebates they have previously, and upgrades would become more costly.

NREI: How can tenants’ usage be tracked? Does this require new equipment installation?

Tracey Johnson: Yes, this would require meters on every tenant’s supply line. The cost of a meter is around $2,500 per tenant, plus installation. In my opinion, these dollars are better spent on things that will reduce water usage permanently.

Frank Teng: Submetering tenant water usage is pretty rare, from our experience, because it is usually costly and difficult to separate a tenant’s water usage in a triple net lease. Water pipes aren’t like electrical panels and wires, and are quite fixed once the building is built. Annual water bills are often an order of magnitude less than annual electricity bills, so there just isn’t a strong price signal to reduce usage. Plus, many tenants share lavatories with other tenants, or can only impact water usage through kitchenette sinks and lavatories, where there are [fewer] opportunities for reduction than, say, irrigation or cooling towers. Upgrades to fixtures and appliances like dishwashers are often a better use of funds. Reverse osmosis water filtration systems are also water hogs, and unless they are absolutely necessary trading those for a carbon filtration system can reduce drinking water usage by three times. There are some neat new products being developed for water submetering that will also be able to monitor usage and send data to the cloud, but they are still some time away from full production. The water industry lags the electricity industry [by] about five to 10 years in this respect.

NREI: Are there any water conservation education programs being instituted for tenants?

Tracey Johnson: Yes, however, with another year of drought, we are actively planning to step up our campaign. Colliers has been engaging tenants in education programs since the beginning of concerns regarding the current drought. It has been four years since significant rainfall was recorded in the state, so new strategies are being implemented to ensure that buildings and tenants are as efficient with water as possible. The marketing department is developing materials for distribution to tenants, and signage for restrooms and kitchens encouraging people to conserve will be deployed shortly. Property managers are also planning tenant functions to discuss steps that can be taken at work and at home to save water!

Frank Teng: Corporate occupiers have been most proactive in launching water education programs to their employees, with competitions, messaging, and engagement through internal social media platforms. One of our clients asked employees for water conservation ideas and received hundreds of suggestions. We helped one client share tips for saving water at home through a workshop with the local water utility. We have even provided information on which foods in the cafeteria are most water intensive.

Building managers have also deployed some education programs, typically in the form of newsletters, building signage, or events such as Earth Day. For tenants that have the option, upgrading to low-flow faucets, urinals, and duel-flush toilets has been implemented, particularly with many of the utility rebates available.

NREI: What kinds of education programs are being instituted?

Tracey Johnson: We are continually updating tenants by email on current measures that are being taken to conserve water at their properties, and encouraging them to contribute in any ways they can. In addition, signs have been placed at properties where irrigation systems have been turned off to let tenants and visitors know the measure was taken to protect the environment. At one location, tenants are participating in a pledge campaign to help save water. They each fill out a paper leaf with their commitment to conservation. The leaves will be posted on a tree mockup in the building’s common area to remind tenants of their pledges, and raise awareness with visitors.

Frank Teng: These programs have generally received great feedback from employees or tenants. Some buildings are able to show that they use half the average water per square foot of normal office buildings, and occupants really respond to that. In one building we conducted a blind test of two showerheads for the fitness center, and occupants actually picked the more water efficient option. It’s useful to note that tenants and occupants generally have very limited influence on overall building water usage—their interaction with water is mainly at restrooms and kitchenette sinks, and there isn’t a lot of behavior they can change there.

NREI: How successful are these tenant education programs?

Tracey Johnson: Success is difficult to gauge. The City of Sacramento conserved 19 percent more water in 2014 than the year before. Most people are taking some kind of action to conserve water. However, it is analogous to residential efforts, where there may be a completely brown lawn, many with dead patches, and one outlier with a beautiful emerald landscape.

Frank Teng: JLL has found that reducing water usage takes a holistic approach, including leadership support, engaging service providers (such as catering, janitorial, and landscaping), and a continued oversight and program management to engage the entire building operations team.