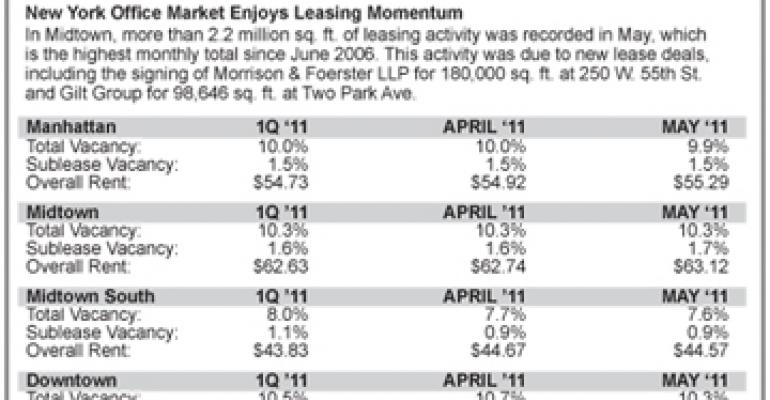 Strong leasing activity is buoying the New York office market, according to newly released data from Cushman & Wakefield. New leases totaling 4.3 million sq. ft. were signed in May, the highest monthly total on record. This activity has helped lower the Manhattan office vacancy rate to 9.9%, the first dip below 10% since March 2009.

More than 14 million sq. ft. has been leased to date in 2011, up from nearly 10 million sq. ft. in April, and an increase of 35.4% from last year at this time. In the first five months of the year, Cushman & Wakefield tracked 23 transactions with taking rents starting above $100 per sq. ft. The weighted average net effective rent of these transactions was $118.58 per sq. ft.

The downtown Class-A market, in particular, has experienced a noticeable decline in total vacancy, decreasing to 9.8% from 10.2% in April. This is due to a number of new lease deals, most notably CNA Insurance at Two New York Plaza for 74,808 sq. ft. Meanwhile, Regus, the William J. Clinton Foundation and accounting firm BCRS Associates LLC took a total of 83,202 sq. ft. at 77 Water St.

“This has been a very strong month, particularly for the downtown market, which has experienced a significant amount of leasing activity,” says Joseph Harbert, Cushman & Wakefield’s chief operating officer for the New York Metro Region. “The recent signing of the Condé Nast lease at One World Trade Center is an indication of the market’s positive momentum.”

The vacancy rates in the other two Manhattan markets surveyed by Cushman & Wakefield — Midtown and Midtown South — remained virtually unchanged from the prior month. The Midtown South market decreased its total vacancy to 7.6% from 7.7% a month ago. Midtown remained unchanged at 10.3%.

The overall Midtown South vacancy rate has decreased 2.5 percentage points since it peaked at 10.1% in January 2010. The total asking rents are $44.57 per sq. ft., with a year-over-year increase of 2.1%, or 91 cents per sq. ft. The supply of sublease space is very low, representing just 12% of overall available space.