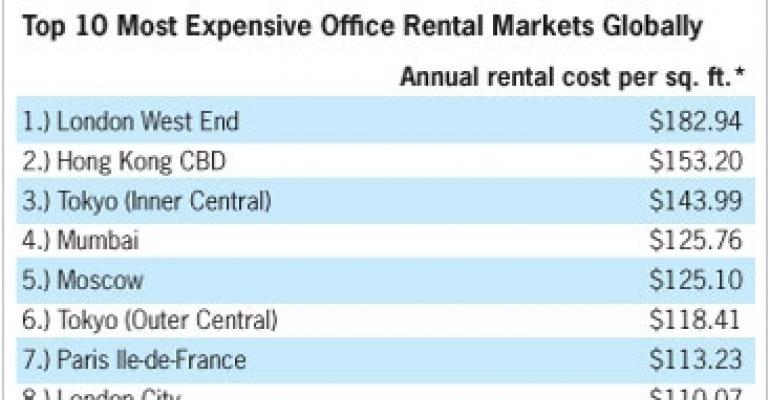 The office towers of New York City may be the priciest in the nation, but they’re a downright bargain when compared with rental space in London, now ranked as the most expensive market in the world.

Even as rents and occupancy declined in many major markets this year, London’s West End bumped Tokyo from the top spot as the most expensive office rental market per square foot, according to a new ranking by Los Angeles-based commercial real estate services firm CB Richard Ellis (CBRE).

“Currency fluctuations play a big role with regard to where markets rank in the top 10 for office costs,” says Dr. Raymond Torto, CBRE’s global chief economist. ”However, the ‘most expensive club’ still includes the usual names—London, Hong Kong and Tokyo.”

But there are small indications of improvement. “On a quarter-over-quarter basis, rental data in these markets is generally starting to show a bottoming, and in some locations, such as London, even an uptick,” says Torto.

Globally, the country with the greatest price increase was Brazil. Rents in Rio de Janeiro rose by 17.7%, while costs in Sao Paulo rose 15.9% over 12 months. Tel Aviv recorded the third-highest increase in office rents at 13.8%.

Vacancy rates in the U.S are still in the process of stabilizing, according to New York-based research firm Reis. Nationally, office vacancies rose 30 basis points in the first quarter. The U.S. national office vacancy rate of 17.3% was the highest in 16 years, according to Reis.

Nationally, effective rents in the office sector declined 0.8% in the first quarter compared with a decline of 1.9% in the fourth quarter.

Although there are signs of improvement, Calanog does not anticipate that recovery for the office market will arrive quickly. “Reis does not expect office vacancies to begin declining until 2011.”