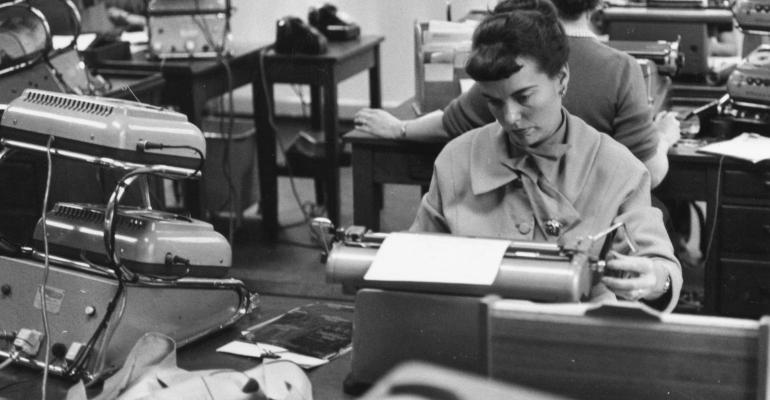 Office Employment Growth Has Not Translated into Robust Leasing and Rent Growth: Here’s Why

Much has been written over the last few years on the very slow rate of rent growth in the office market. A simple glance at historic trends shows that office rents grew at a much faster rate at this stage of the market recovery in the past. One reason why this is so is the overhang of excess supply from the last recession and the slow rate of net absorption relative to job growth. But another reason may have to do with which industries contributed the most to the office recovery and whether the shift in office growth patterns affected leasing activity and rent growth.

Many reports have cited the downsizing of office space required for Millennials in technology-driven industries. This is very likely the case. Moreover, technology-related industries contributed a far greater share of the office employment growth in the most recent recovery (17 percent) compared to the last recovery (12 percent). But this only tells a fraction of the story. The pie charts below show two other significant trends in the recent recovery (2010-2015) compared to the prior one (2003-2007).

First, the industry showing the biggest gain in contribution to overall office employment growth was temporary services. True, while we think of “temps” as administrative assistants, receptionists and the like, we cannot verify that some of these temporary employees weren’t hired by manufacturing, distribution and other non-office based industries. Still, it is worth including for these illustrative purposes.

The second glaring finding in the above numbers is the drop in contribution from banking and securities firms from 7 percent in the 2003-2007 recovery to 2 percent in the current one. Indeed, the recession was driven by over-leveraging by banks and non-bank institutions. These industries also suffered disproportionately more during the recession. Still, in most of the recoveries over the last few decades, securities firms had led the rest of the economy in job growth. The fact that the contribution from insurance firms jumped in this recovery does not offset the lower numbers in securities and banking industries.

The third striking finding in the pie chart is the drop in contributions from the “traditional” professional business services industries, such as legal, accounting, advertising, consulting, engineering and architecture. While most of these industries have grown at a slower rate since 2010 than from 2003 to 2008, the most pronounced difference is the slump in growth in the legal industry, which has added only 8,000 jobs since 2010, or 0.7 percent compared to 34,000 jobs added from 2003 to 2008, a growth rate of 3 percent.

As few would argue, the legal industry and the securities industry have traditionally been the two highest-paying industries. They are also known for leasing space to accommodate bigger offices and standard amenities such as libraries, conference rooms, large reception areas, lunch rooms, etc. Given the lack of growth in these industries, one is led to assume that the relatively tepid net absorption figures, as well as slower rent growth rates, are likely being driven not only by reduced leasing levels but smaller budgets from these users.

Of course, the technology-related companies are still leasing large blocks of space with ample room for modern amenities such as gyms, bike rooms and rooftops. Not surprisingly, metros with the highest technology-related employment growth are seeing the highest net absorption figures, as well as rent growth: San Francisco, San Jose and Seattle have seen rent growth rates of 20 percent, 19 percent and 13 percent, respectively, since 2012 according to Reis data.

With its raising of the Fed Funds rate, the Federal Reserve has finally signaled that the economy is strong enough to withstand higher interest rates and should grow at a healthy rate in the next few years. This growth will raise demand for loans, financing, and yes, legal and accounting services. While they may not need the high square-footage-per-employee that they used to, these industries should start to grow at a more robust rate in the years to come. 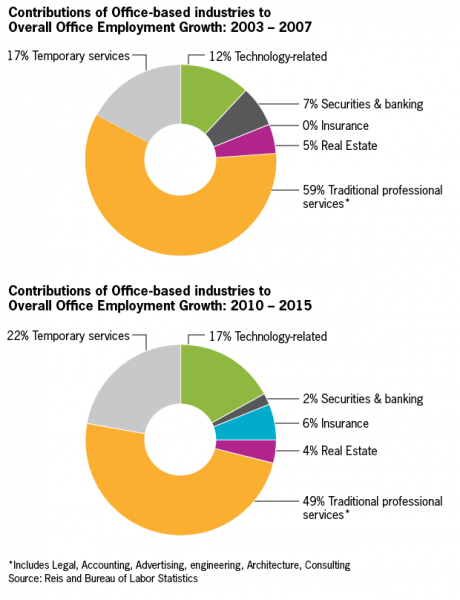