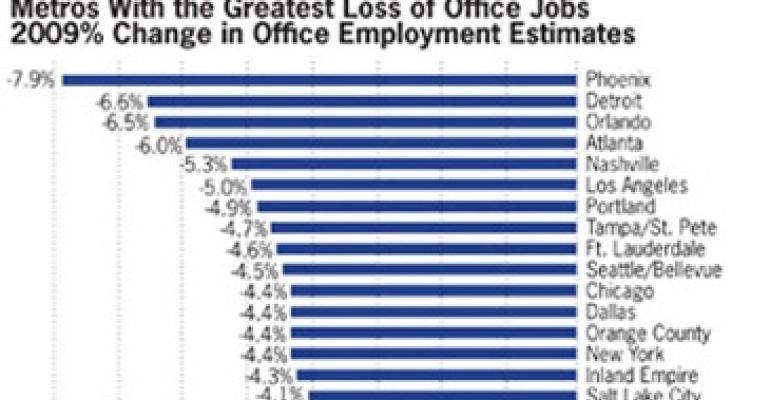 In a revised forecast, Foresight Analytics projects that the national office vacancy rate will hit 18.4% by year’s end, up from an earlier prediction of 17.5%. As businesses hard hit by the financial crisis began to struggle in late 2008, they shed more space than anticipated, according Susan Persin, a partner with the Oakland Calif.-based research firm.

In tandem with rising office vacancies, estimates for job losses among office space users rose to 1.6 million for 2009, up from a previous estimate of 1.2 million to 1.5 million.

At the end of the second quarter, the national office vacancy rated stood at 16.2%, up from 14.5% at the end of 2008. Foresight Analytics draws it data from 39 of the largest office markets in the nation and covers all classes of office space.

Metro areas with the greatest estimated percentage change in office jobs include Phoenix, Detroit, Orlando and Atlanta (see chart). The absolute number of office jobs expected to be lost in 2009 is greatest in New York, followed by Los Angeles, Chicago, Atlanta and Phoenix, according to Foresight Analytics. Not surprisingly, these markets are also the metros with the weakest office fundamentals.

The good news is that as demand for office space continues to fall, the amount of new supply hitting the market has ebbed. Construction activity nationally is down 30% from year-end 2008 as projects are completed, delayed or canceled. A few markets are bucking the trend, however. “There are a couple of markets like Miami and Seattle that do have a lot of new supply when there’s negative demand,” Persin notes.

Miami, for example, will experience some of the most significant growth in vacancy rates nationally, and is projected to reach 22.5% by the end of this year. Almost 700,000 sq. ft. of new supply was delivered during the first half of 2009, with another 2.6 million sq. ft. under construction at mid-year. As a result, Miami office rents there are expected to fall by 15% to 25% this year.

Likewise, office vacancy rates in the Seattle/Bellevue area are expected to reach 21.5% during the second half of 2009, much of which can be attributed to the 4.2 million sq. ft. of space under construction at mid-year. Seattle rents are projected to drop 21.8% by the end of 2009, according to Foresight.

Supply also has worked its way into markets that would otherwise be considered fundamentally sound. “D.C. is an interesting market because it would have been among the best performing if not for a large pipeline of supply,” says Persin.

For instance, 2.9% of Washington, D.C.’s inventory was under construction at the end of the second quarter. So despite the city’s comparatively healthy economy, Foresight Analytics projects that the vacancy rate in the nation’s capital will rise to 17.4% this year while asking rents fall 10% to 15% by year end.

So where are the best investment opportunities? In some ways, the answer to that question is in line with the old adage, “What goes down must come up.”

Places that have been hard hit by the housing bubble like Southern California, Phoenix and Florida may be ripe for buying opportunities. “An investor has to be willing to hold for a period of time,” Persin says. “You’re not going to do quick flipping and make money at this point.”