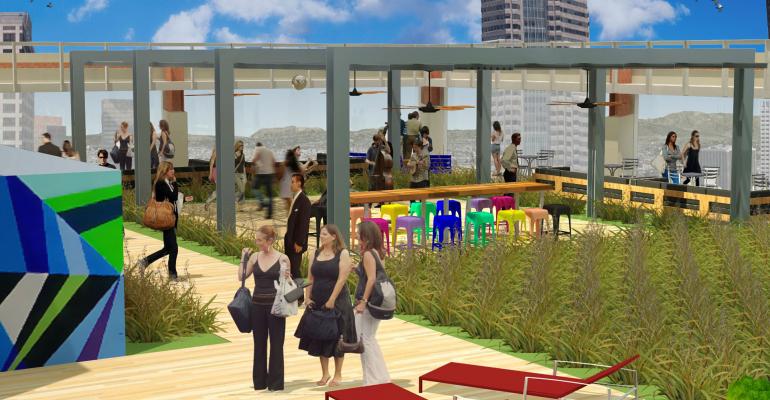 Inspired by Millennials, the collaborative office design is now popular across most industries and age groups. Office building landlords are now outfitting lobbies with amenities and creating indoor and outdoor spaces where building occupants can work, socialize and meet with each other or clients.

Office landlords are capitalizing on a concept originally conceived by co-working operators like WeWork, according to JLL National Research Director Julia Georgules. “The bottom line for employers occupying creative office space is they want to attract talent,” she says. But for landlords, enhancing common areas is becoming important to sustaining occupancy levels.

A 2016 Workplace Innovation Survey, administered by architecture and planning firm Gensler, revealed that the most innovative workers are twice as likely to have a choice about where and when they work and are twice as likely to use amenities such as cafeterias, coffee shops, outdoor spaces, gyms, restaurants and childcare facilities, according to Gensler architect Maria Martinico. She notes that landlords are improving office building lobbies with soft seating, wine and coffee bars and trying to create environments that provide an experience.

For example, owners of two suburban San Diego projects, which are located in neighborhoods with few nearby retail amenities, created on-site spaces that provide occupants with a unique experience. Cruzan utilized an Airstream trailer as a coffee bar, and Locale Advisors created an outdoor area configured to resemble a tree house.

The most desirable office buildings, however, are in located in areas that offer access to off-site retail amenities as well, according to Georgules. She cites Assembly Row, a transit-oriented, mixed-used development located on the waterfront in Somerville, Mass. That contains 1.6 million sq. ft. of build-to-suit office and lab space. The project’s office component offers shared indoor and outdoor spaces with amenities for the exclusive use of occupants, but is also surrounded by 500,000 sq. ft. of retail, restaurants and entertainment venues.

Similarly, The Ratkovich Co. has created a lobby hangout at its newly renovated 750,000–sq.-ft. office tower at The Bloc—so called because it occupies an entire city block—in downtown Los Angeles. Located within a short walk or transit stop from a plethora of new residential projects, this $421-million, 1.8-million-sq.-ft. mixed-use development transformed an old Macy’s-anchored mall into an open-air retail center.

The office tower’s new lobby features soft seating that extends onto a balcony that connects to the retail component. The management office doubles as a gathering space for building occupants, with a kitchen and seating area that includes a restaurant-style booths and bar that offers a keg of beer and coffee. A rooftop garden lounge, which is under construction, will provide occupants with an alternative work and meeting space, as well as a gathering space for socializing or hosting events. Gensler is also putting a rooftop lounge atop the mezzanine level.

When relocating to new areas, many companies look for locations with an office-residential space balance in pedestrian-friendly neighborhoods that provide affordable rents, nearby retail amenities and mass transit, says Tim Lee, vice president of corporate development and legal affairs with Los Angeles-based private real estate investment firm the Olive Hill Group. He added that the housing affordability factor is why so many firms from San Francisco are opening offices in downtown Seattle and Los Angeles.