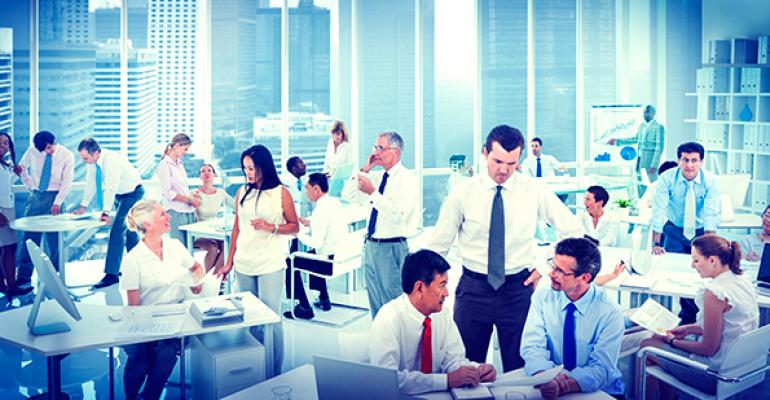 Office Landlords Likely to Rule Until 2018

Second-quarter office projections should please investors, as the traditional first-quarter slide was brought back up to full performance by midyear, with no sign of abating, according to market experts.

The national U.S. office vacancy rate dropped to below 16 percent, declining by 10 basis points from the first quarter to the lowest vacancy rate since the recession began seven years ago, according to a statement by Reis Inc.

Further, almost half of the increased leasing is driven by positive tenant growth, according to a second-quarter JLL report. Overall, 46 percent of leases signed were corporate expansions, with technology and financial services firms leading the way, says Julia Georgules, vice president of JLL research.

“I’d call it an improvement, not a rebound, from slow first-quarter activity,” she says. “The interesting thing is that we still saw this activity as some worried about drops in venture capital funding and an IPO slowdown. Large, name-brand firms are opening new offices in primary and secondary markets, trying to tap into new talent pools. In some places, the high-demand urban core is becoming too expensive, and tenants are looking for fringe areas.”

Even though there’s now more than 100 million sq. ft. of new construction in the national pipeline, rents continued to increase in the second quarter, up by 1 percent from the past quarter. Most markets still largely favor landlords, Georgules says, as about 65 percent of the new supply is focused on just 10 markets, including Dallas/Ft. Worth and Southern California.

She says the top markets, however, have more than enough demand to meet the supply. There’s also not enough construction in constrained markets such as Nashville, with the lowest vacancy rate at 5.2 percent. The city has 3.5 million sq. ft. under construction, with 61 percent already pre-leased.

“Occupancy growth is just trailing new supply,” Georgules says. “A lot of tenants want to wait until more supply comes in, so you have developers breaking ground speculatively based on strong market fundamentals.”

Investors continue to see upside potential in office properties, as they are the only major property type that has yet to reclaim prior peak pricing, according to a recent midyear report by Marcus & Millichap. Pricing has risen nominally since mid-2015, and cap rates haven’t moved much beyond the low-7 percent range, but a slight rise in first-year returns occurred in the primary markets. The tertiary markets remain a higher-return option for investors willing to compete with local capital, according to the Marcus & Millichap report.

Both the JLL and Marcus & Millichap reports predict rents will continue to increase to almost 4 percent on the year, and vacancy will drop by 30 basis points this year. Employers are on pace to hire 2.1 million workers in 2016. Consumer growth is expected to result in more office hiring. Landlords will continue their domination of the office market well through 2017 in most geographic areas, and then settle into neutral by 2018, according to JLL. However, Georgules says many markets are nearing their peak rents, and growth will moderate next year.

“I think over the next six months, you will see rent increases in key submarkets, but not market wide, specific to those in high-demand,” she says. “Eventually you’re going to see flattening as to what tenants can withstand and the space coming online. The yields will be found in some secondary and suburban markets with well-located office buildings that are near public transportation and other amenities. If your workers of your investment property have to drive to lunch, it’s going to be more challenging to gain yield or demand pricing.”