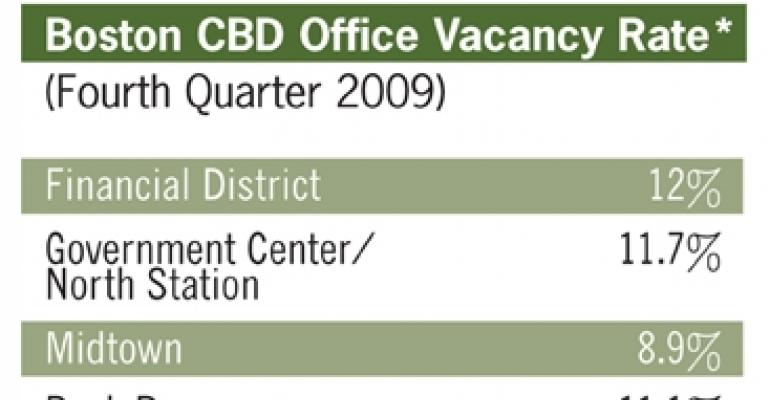 The health of the office market in greater Boston continues to be a mixed bag for building owners, according to fourth-quarter data from Cushman & Wakefield. While the overall vacancy rate rose one percentage point from the prior quarter to reach 18.5% across all classes of office space, the news in Boston’s central business district was more encouraging with vacancy inching up only 0.1% to finish the year at 12%.

One troubling trend for landlords is that rents for direct space across the market have fallen precipitously over the past year. The average rental rate among all classes of office space ended 2009 at $25.58 per sq. ft. on a gross basis, a 14.7% decline from the end of 2008.

“Quality space in downtown Boston remains a valuable asset,” says Tom Collins, executive managing director and vice president at Cushman & Wakefield of Massachusetts. “Pricing for laboratory space in Cambridge continues to remain firm. I believe that the numbers for the fourth quarter reflect the fact that while Boston continues to be impacted by this global economic downturn, it seems likely that the long-term effects of this recession will be shallower and slightly less hard-hitting than in other markets across the country.”

Total office leasing activity for all of 2009 was 9 million sq. ft., down 25% from 2008 levels when 12 million sq. ft. of leasing transactions occurred across greater Boston. Some of the key transactions in 2009 occurred in the fourth quarter, including Verizon’s 200,000 sq. ft. renewal at 185 Franklin St. Law firm Edwards Angell Palmer & Dodge renewed 188,000 sq. ft. at 111 Huntington, and financial services company Loomis Sayles renewed 233,000 sq. ft. at One Financial Center.

“There’s no question that it’s still tough out there,” says Rick Cleveland, managing director of research for Cushman & Wakefield’s New England region, referring to the performance of Boston’s office market. “However, the trend downward has slowed significantly, and there’s much less sublease space available than there has been in previous downturns, particularly in the financial district.”

The available sublease space in the greater Boston office market accounts for only 3.1% of overall vacancies, according to Cushman & Wakefield, well below the historical peak of 7% reached in 2001.