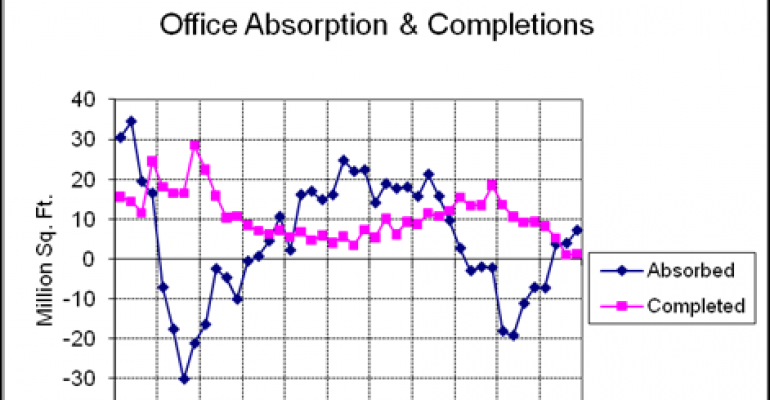 The U.S. office market continues to recover at a snail’s pace in large part because of an overhang of shadow space, according to a newly released forecast from brokerage firm Grubb & Ellis.

The vacancy rate nationally fell by 10 basis points in the fourth quarter of 2010 to 17.7%, according to national brokerage firm Grubb & Ellis. That’s down only slightly from the peak of 17.9% in the second quarter of 2010 and well above the equilibrium level of 12% to 14%, or the point at which landlords and tenants negotiate on an even playing field.

Shadow space — leased but empty office cubes, floors and wings — vacated during the recession will accommodate about one-third of all net new demand in 2011 and about one-fourth in 2012, predicts Bob Bach, chief economist with Grubb & Ellis. This activity will not be reflected in the published statistics.

“Add to that the still-tepid rate of hiring, and it seems that the current embryonic recovery in the office market will struggle to keep up with prior recovery cycles,” says Bach.

The office leasing market is headed in the right direction, the veteran economist emphasizes, but not very quickly. “In a normal recovery, the vacancy rate would fall by about two percentage points per year. In 2011 and 2012, the rate of decline is expected to be about one percentage point per year, hence a half-speed recovery.”

On the positive side, corporate profits and cash reserves are high, so employers have plenty of dry powder to add staff when they feel the time is right, Bach observes. Meanwhile, confidence in the small-business arena is beginning to improve. Should the fourth-quarter economic momentum continue into 2011, the half-speed office recovery could shift into a higher gear.

Improving vital signs
Absorption crept higher to 7.1 million sq. ft. in the fourth quarter, the best quarterly performance in three years but well below the quarterly average of 18 million sq. ft. notched during the 2005-2007 expansion. For all of 2010, absorption totaled 8.8 million sq. ft., according to Grubb & Ellis.

The vacancy rate falls when absorption outpaces completions, which is exactly what happened in the fourth quarter as developers delivered just 1.3 million sq. ft. of new space.

Projects left in the construction pipeline totaled 19.5 million sq. ft., about one-quarter of which was build-to-suit. Two towers under construction on the World Trade Center site accounted for about one-third of the speculative space still in the pipeline.

The average asking rate for Class-A space at the end of the fourth quarter was $30.90 per sq. ft., full-service gross, reports Grubb & Ellis. This was essentially flat compared with the third quarter and down by 1.6% from the fourth quarter of 2009.

The average asking rent for Class-B space was $22.82 per sq. ft., or three cents above the third quarter rate but still down by 2% from the fourth quarter of 2009.

In the nation’s central business districts, the average asking rate for Class-A space has risen slightly for two consecutive quarters. It’s a sign that tenant demand, much like investor demand, is returning for the best properties in the strongest markets, according to Bach.


One sour note: Sublease space in the fourth quarter rose unexpectedly, ending a string of four consecutive quarterly declines, says Bach. “This is a reminder that tenants remain focused on controlling occupancy costs.”