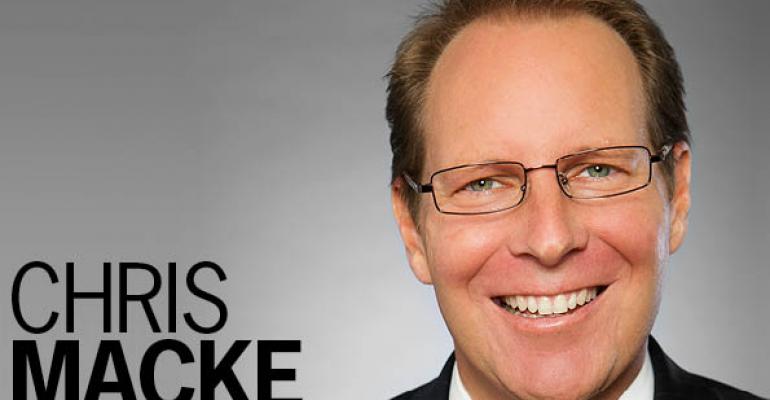 Commercial real estate investors are flocking to secondary and even tertiary markets in search of yield. This is due to a variety of factors, including an overall low yield environment and risk complacency. In addition, similar to the Federal Reserve “crowding” investors out of Treasuries into higher yielding investments, foreign buyers of U.S. commercial real estate are “crowding” domestic investors out of gateway office markets into higher yielding secondary and tertiary markets. Is chasing extra yield into smaller, often slower growing and less liquid markets, the right route? We think not, especially when spreads between gateway and non-gateway markets are declining and financial market volatility is increasing. Instead, we prefer to maintain the path of a disciplined focus on markets with proven superior long‐term income growth.

A tsunami of aggressive capital

Foreign buyers comprised 10.2 percent of total U.S. commercial real estate sales as of the second quarter 2014, a level surpassing the previous cycle’s peak of 9.9 percent. Where have foreign buyers been most active? They have disproportionately targeted gateway markets such as Boston, Chicago, Los Angeles, New York, San Francisco and Washington, D.C. In the second quarter 2014, foreign investor acquisitions in these markets were 185 percent greater than three years ago, 2.7x the rate of increase in office acquisition activity by domestic buyers in these same markets over the same period.

Foreign buyers now account for nearly 25 percent of acquisition activity in gateway office markets, up from 9 percent as of the third quarter of 2009. This capital clearly has an appetite for primary office markets, with over 67 percent of foreign investors now placing the U.S. at the top of their wish list, according to the Association of Foreign Investors in Real Estate’s (AFIRE) most recent survey, up from 44 percent in 2010. Foreign buyers, combined with a low yield environment and increasing risk complacency, are pushing domestic investors into secondary and tertiary markets. 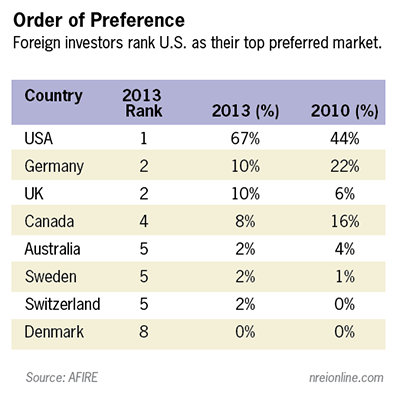 This crowding out results not only from increased demand by foreign buyers, but also their effect on pricing. This can be attributed to four main factors: longer investment time horizons; different investment motivations; lower reference yields; and inferior economic growth prospects of countries foreign investors would normally consider as alternatives to the United States.

Foreign buyers often have longer investment time horizons than domestic investors, and it is not unusual for some to view investments from a 50- or even 100-year perspective. In addition, foreign investors are more likely to place money outside their home countries motivated by a desire for greater diversification as a result of domestic political and/or economic uncertainty. For these investors, they are not so much motivated by return on capital as return of capital. Still others may want to ensure the preservation of principal, but at a higher yield—the so-called “bank alternative” money, where U.S. commercial real estate is viewed as a substitute to placing money in a bank.

Sovereign debt yields in other countries are languishing below one percent, making U.S. gateway office market yields very attractive. When these buyers borrow at spreads over domestic sovereign debt yields that are 200 basis points below U.S. Treasury yields, they begin with a significant advantage before the first offer is even made. Finally, the U.S. offers better near‐term economic growth prospects, as European Union countries struggle to generate economic growth and China faces both a decelerating economy and internal division regarding how best to respond. In this environment, the U.S. economy is the shining star.

How aggressive are foreign buyers? Between the first and second quarter of 2014, the average cap rate spread transaction made by foreign vs. domestic buyers in gateway office markets was over 80 basis points. While some of this may be due to the difference in the composition of assets acquired, the four factors outlined above likely influenced foreign buyers to bid more aggressively and accept yields lower than their domestic counterparts.

Smaller markets—a deal with the devil?

With all that foreign competition, did domestic buyers throw in the towel? To a degree, they did in gateway markets, but they didn’t give up all together. Rather, many migrated to non‐gateway office markets in search of higher yields (similar to fixed income investors seeking higher yields outside of Treasuries). Domestic investors increased their transaction activity in these secondary markets by 118 percent, while foreign buyer activity in non‐gateway office markets increased by only 37 percent over the same period.

However, while investors are finding higher yields, there are significant tradeoffs in acquiring assets in smaller markets, including lower long‐term rent growth prospects. The chart bellows depicts the 20‐year increase in rent for each of these markets, as well as the national average and average for the gateway office markets over the same period.

All of the non-gateway markets, except Austin, exhibited cumulative rent growth below the national average and well below the average rental growth rate of the gateway office markets. Investors may be securing higher initial yields, but they are doing so at the expense of long‐term rent growth performance.

Making matters worse, yields in non‐gateway office markets have declined in response to the increased activity. This has led to a material decline in the cap rate spread between gateway office markets and certain non‐gateway markets. For example, cap rate spreads between Gateway office markets and some of the more active sales markets, the “Sizzling Seven” (Austin, Charlotte, Dallas, Denver, Houston, Nashville and Seattle), have compressed significantly nearing pre-recession levels. At the individual market level, the spread between Atlanta office cap rates and gateway office cap rates declined from 191 basis points in 2009 to 100 basis points in 2014--a significant decline in yield advantage. We expect this trend of yield spread compression to continue further reducing the attractiveness of slower growth markets. 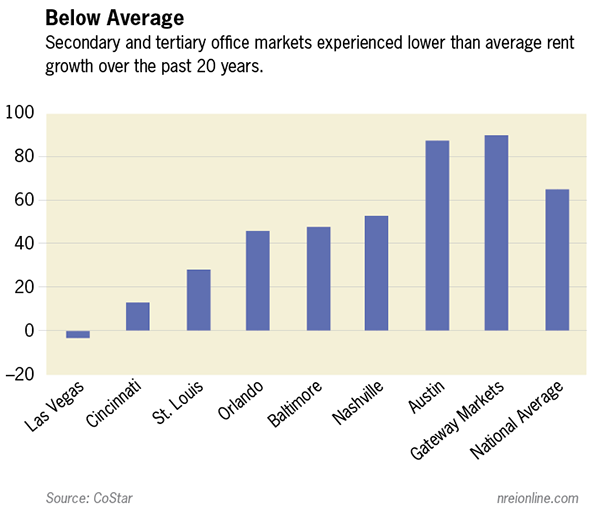 Follow the herd or take the road less travelled?

What are the implications for U.S. investors? Office assets and assets in other property sectors in secondary and tertiary markets will continue to see increasing demand as buyers seek yield, and this trend may accelerate as foreign investors are now following the herd into these smaller markets. In response, some domestic investors are now looking even farther afield as they try to stay one step ahead of their foreign competition. Others, however, will view this as an opportunity to turn in a different direction, remembering the difficult exit from smaller markets experienced during the last cycle. They will view it as a welcome opportunity to recycle capital out of slower growth markets into markets with superior long-term growth performance.

The forward-thinking core investor should see an opportunity to sell to the herd heading to smaller secondary and tertiary markets. We believe risk-conscious investors are better served to turn their buying attentions to where there is more likely to be superior long-term income growth potential. Yet, much like the siren song of sub-prime mortgage yields, many will again inevitably succumb to the attraction of superior short‐term yield advantages, despite the temporary nature of the yield advantage and real risks of experiencing a repeat of the last downturn.

A low yield environment, increasing risk complacency and increased foreign buyer activity in gateway office markets is a test of core fund manager discipline: join the herd on the now well‐worn road to smaller secondary and tertiary markets or be among the first to capitalize on the opportunity to exit these markets and move back to gateway and larger secondary markets with superior long-term growth prospects? At this point in the cycle, as yield spreads compress and volatility increases, we think chasing long-term income growth, not short-term yield gains, will make all the difference.