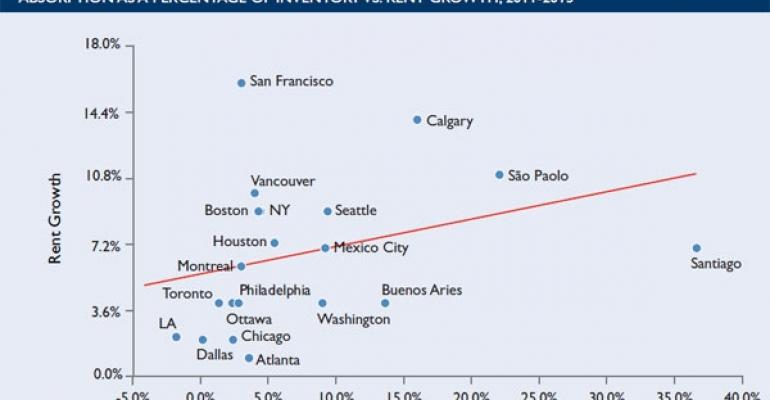 Technology, Energy Hubs to Outperform the National Office Market in 2012

After generating strong momentum in the first half of 2011, the national office sector will experience slow growth in 2012. The financial crisis in Europe, coupled with government budget-cutting in the U.S., will put a damper on demand for new office space next year, except for the select markets that serve as homes to technology firms and energy companies.

By the end of 2011, the average office vacancy rate for the U.S. as a whole will stand at 16.8 percent, according to research by Grubb & Ellis, a national real estate services firm. Over the course of 2012 it will likely budge just 110 basis points, to 15.7 percent. What’s more, average rents will continue to stagnate. Asking rents on class-A properties might rise 0.7 percent next year, while rents on class-B buildings will go up 0.2 percent, according to Robert Bach, senior vice president and chief economist with Grubb & Ellis.

“In some ways, it’s the best case scenario. It’s hard to fathom right now how what’s going on in Europe is going to affect the financial markets and exports,” Bach notes. “The U.S. economic indicators seem to be picking up, but at the same time, some of the global indicators are softening. Growth in the U.S. won’t be robust if they rest of the world isn’t participating, and that will carry over into leasing demand for commercial real estate.”

Jones Lang LaSalle estimates that today, the vacancy rate in the U.S. office market stands at 17.5 percent. Over the course of next year, it might reach 16.5 percent, but is unlikely to drop further.

“Twelve months ago, we would have predicted that it would come down below 16 percent, but we don’t see that as a result of companies being a little more conservative in their hiring,” says John Sikaitis, director of office research with the firm.

The most recent Bureau of Labor Statistics employment report, issued on Dec. 2, estimates the national unemployment rate in November at 8.6 percent, its lowest level since March 2009. However, the job openings rate in October, the most recent month for which data is available, stood at 3.3 million—a decline from 3.4 million in September.

“The level of leasing activity we saw in the first half of 2011 has tapered off,” says Maria T. Sicola, executive managing director for Americas research at brokerage firm Cushman & Wakefield. “We just don’t see the demand there and the strong employment growth yet.”

The markets that have a high concentration of technology and energy firms might see a different picture next year. Because technology and energy sectors have been experiencing strong growth lately, leasing demand in such cities should begin to fall in line with supply. The outperformers will likely include San Francisco, Seattle, Houston, Oklahoma City and Pittsburgh.

“It’s not necessarily the banks and the law firms that have been responsible for the office sector recovery: it’s technology and sciences and energy,” Sicola notes. “It’s the Googles and the Twitters, and their employees have been driving where they want to be. It will be very interesting to keep an eye on Silicon Valley in particular. That’s a market that’s very, very strong.”

Nevertheless, Cushman & Wakefield expects rents to stay flat throughout most markets in the country in 2012. So does Jones Lang LaSalle.

“Many markets are still bouncing around the bottom,” says Sikaitis. “Nationally, we might see a slight uptick, but it’s going to be very minor.”

In view of a muted outlook for office sector fundamentals, investments sales activity next year will show only moderate growth.

There is plenty of capital still waiting to be deployed, according to Sikaitis, so class-A office buildings in primary and secondary markets will continue to get traded. But given that the industry posted a 45 percent increase in office sales this year, a 15 to 20 percent increase next year will look more measured by comparison.

It will also be more within historical norms. Part of the reason investment sales showed such strong growth in 2010 and 2011 was because the industry was coming off almost no activity in 2009, according to Bach. But real estate investors still remember the consequences of risky deals made in 2006 and 2007, so they will continue to look carefully at property fundamentals before plunking down their money.

“What we are really doing here is returning to normal,” Bach says. “There is a good amount of liquidity, both debt and equity, there is price transparency and fairly reasonable expectations on the part of sellers. It will be like something we saw in 2004.”

In 2004, the U.S. office market saw $74.5 billion in investment sales, according to Real Capital Analytics, a New York City-based research firm. The average cap rate on office transactions that year was 7.99 percent.