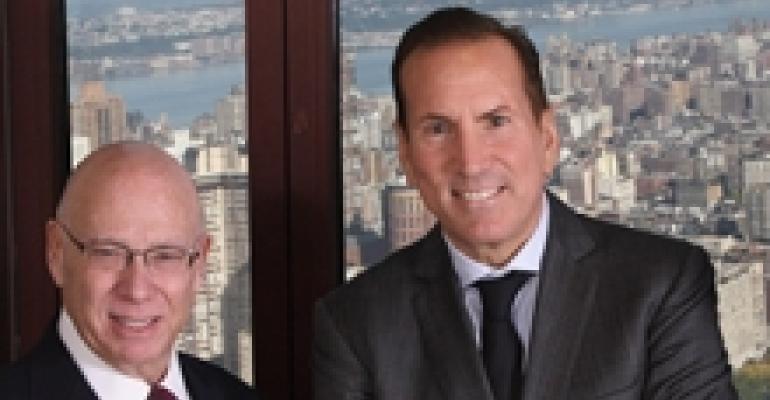 Greystone, the provider of multifamily and commercial mortgage loans, has formed the Greystone Bassuk Group, a joint venture with Bassuk Organization.

For 15 years, the Bassuk Organization has been a provider of real estate investment banking services to owners and developers in the New York Tri-State area. The new group will provide expanded real estate and financial services, including creative debt and equity financing, to commercial real estate clients with multifamily assets nationwide.

Richard Bassuk is chairman and CEO of the Bassuk Organization Inc. and also co-founded the Singer and Bassuk Organization in 1996. Stephen Rosenberg is the founder and CEO of Greystone. Bassuk has arranged financing of more than $4 billion for new developments and redevelopment projects throughout New York, in up and coming areas as well as established neighborhoods.

NREI talked to Bassuk about why investors continue to flock to multifamily and why 80/20 projects remain popular. An edited version of that interview follows:

NREI: Financing activity is starting to pick up - why are investors going to multifamily?

Richard Bassuk: We believe there are two main reasons why investors like multifamily. As an asset type, multifamily has always had the highest return and the lowest risk. Traditionally, multifamily assets are held for long periods—sometimes for generations—while generating wealth over and over again, tax-free. The building gets rented out and refinanced and rented and refinanced, etc., and it constantly generates tax free wealth.

Secondly, right now we are seeing once-in-a-lifetime low rates on long-term fixed-rate loans. It is possible to get a HUD-insured 35-year loan at a fixed rate of 2.5 percent.

NREI: Talk a little about why 80/20 projects are so hot now.

Richard Bassuk: There are four reasons why we believe the 80/20 market is so interesting: First of all, in New York, it is the best way to get the largest real estate tax abatements. Second, the federal government provides low-income housing tax credits of 4 percent. Third, there is a 2.8 percent mortgage recording tax exemption and finally there are extremely favorable financing options through the New York City program.

NREI: What areas in the New York City region are particularly hard to penetrate and how do you get in there?

Richard Bassuk: In my experience, the New York real estate business is a relationship business. I have been very fortunate in my career to have worked on some of the most prestigious and biggest projects in New York City. Through those experiences, I have been able to establish firm relationships and credibility in this business, not only with clients, but also with the institutions, agencies and lenders that are the backbone of the industry. Those relationships and the record that my firm can show, allow us to continue to be successful in New York City.

Cox will work with CEO Stan Johnson on the strategic direction of the firm and oversee its daily operations, including planning, marketing, finance, technology, human resources and administration.

Cox brings more than 25 years of commercial real estate experience to his role with Stan Johnson. Since 1997, he has served as a senior account executive with CBRE, most recently serving as senior managing director and alliance director of health care services. Previously, Cox served as CBRE’s regional operations director of a 25 million-sq.-ft. portfolio for several high-profile clients, including, McKesson, Google and Visa.

Catherine (Katy) D. Rice will join W.P. Carey Inc. as managing director on January 7, 2013 and will be appointed chief financial officer in March 2013.

The company announced Mark DeCesaris' intention to resign as CFO and his election as a member of the board of directors in July 2012.

With more than 25 years of real estate industry experience, most recently Rice served as managing principal at Parmenter Realty Partners, a privately held real estate management, investment and development company. From 2002 to 2009, she served as CFO of iStar Financial Inc., a public REIT focused on real estate finance.

Kahn is responsible for day-to-day business management, as well as all operational and consulting activities for Cresa New York. He comes to Cresa from Gravitas, where he served as president, overseeing operations and strengthening the firm’s resources and capabilities. Prior to that, he held the position of COO at DB Zwirn and Pequot Capital, as well as CFO at Zurich Scudder Investments.

Kirby Elected to Board at Griffin

John J. Kirby Jr. was elected a director by the board of directors at Griffin Land & Nurseries Inc. Kirby is a retired partner of Latham & Watkins LLP and was head of litigation of that firm's New York office. Griffin operates a real estate business, Griffin Land and Imperial Nurseries Inc., its landscape nursery business.

Watt will be primarily responsible for arranging and distributing a series of high-quality 1031 Delaware Statutory Trust and other private real estate wealth management programs.

Davidson will be responsible for helping customers maximize value through acquisitions of assets and locations, mitigation of lease liabilities through rent reductions, lease terminations, disposition of retail and industrial locations, strategic retail advisory services, lease renewals and valuation projects in the U.S. and Canada.

Prior to joining Hilco, Davidson was a consultant with A&G Realty Partners and previously with DJM Realty for eight years.

Ronald A. Schagrin and Elias Porras have both been in the business for more than 25 years and have worked as a team representing industrial and office landlords and tenants throughout Broward and Palm Beach counties.

Colliers International Nashville also added Brandon Hoop to the company. Hoop comes to the team with a background in construction and development after heading Nashville Conveying for seven years. He specializes in office tenant and landlord representation and investment sales.

Freudenheim spent 22 years with Colliers/Meredith & Grew as a principal and worked on three of the largest telecommunications deals in the history of commercial real estate in Boston.

Blankenship will be based in Dallas. In addition to meeting the needs of current clients and developing new business, he also will support the efforts of Cassidy Turley’s tenant representation, project leasing and property management groups.

Over the course of his 32-year career, Blankenship has managed construction projects valued at more than $2.7 billion. He joins Cassidy Turley from Jones Lang LaSalle, where he was managing director for Dallas-Fort Worth project and development services.

Prior to joining Metropolitan, Lee was a managing director and head of real estate private equity fundraising at UBS. There he was responsible for the origination and execution of private capital raising assignments for leading real estate investment firms around the world.

Before coming to JLL, McCoy was based in New York City, where she was design and construction project manager at an integrated real estate services provider in the firm’s corporate interiors construction practice.

Cohn will be representing tenants in commercial real estate leasing as well as conducting real estate market research. Prior to joining Adams, Cohn worked for Studley Commercial Real Estate in Manhattan, where he was a junior broker assistant with responsibilities in the market research group and the capital transactions group.

Rand Wolf is a former senior vice president at CBRE. He will work with Boerke’s industrial team. Kristian Sydow and Nathan Powers, both former team members at Apex Commercial (now Jones Lang LaSalle), will work for the company’s retail team.

These new additions come only a few months from Roger Siegel joining the firm as a partner in April and David Pudlosky’s promotion to partner this past January. To help support the new team members and firm’s growth, The Boerke Co. also added Brianna Larson as a marketing and research analyst in September.

LeBlanc and Stacy have nearly 40 years of experience between the two of them. LeBlanc is a former senior managing director of private markets for Teacher Retirement System. Stacy comes from his own firm, T. Stacy & Associates. CapRidge Partners has secured an initial institutional commitment of $30 million of equity with a major, public institutional investor.

The RADCO Cos. named Robert Clark an analyst.

Clark comes to RADCO from the University of Georgia, where he was a presidential scholar and a member of the dean’s list. At RADCO, he will join the acquisitions team. His responsibilities will include: modeling, sales tracking, and collection and analysis of market data. He will also provide financial and physical due diligence analysis on prospective real estate purchases.

Seyfarth Shaw LLP brought on Miles Borden as a partner to the firm’s real estate department in New York.

The real estate holdings firm and parent company of DSA Realty and DSA Management has signed a seven-year lease for a 2,200-sq.-ft. office at 60 Madison Avenue.

George Kohl, senior managing director for CBRE Chicago, was elected president of the Building Owners and Managers Association of Chicago at their 110th annual membership meeting.

Kohl oversees the Chicago asset services line of business for the Northern portion of the Central Region. In addition to Chicago, he has responsibility for Cincinnati, Cleveland, Columbus, Detroit, Indianapolis, Milwaukee, Minneapolis and Pittsburgh. Kohl joined CBRE following its merger with Trammell Crow Company.

The National Apartment Association named Alexandra S. Jackiw as chair of the board during the group’s 2012 assembly of delegates in Indianapolis.

Jackiw is managing director, residential client services at McKinley, the Ann Arbor-base owner and manager of office buildings, retail centers and industrial/flex space. She has been with the company since May, following a dozen years as president of Buckingham Realty in Indianapolis.

The group praised Stein for his work as the organization’s chair in 2008 and his efforts dealing with the financial crisis. Stein also served as first vice chair in 2007 and on NAREIT’s executive committee from 2003 to 2010.

NAREIT recognized Steers for his efforts that moved REITs into the investment mainstream. Both awards were presented at REITWorld 2012 in San Diego.