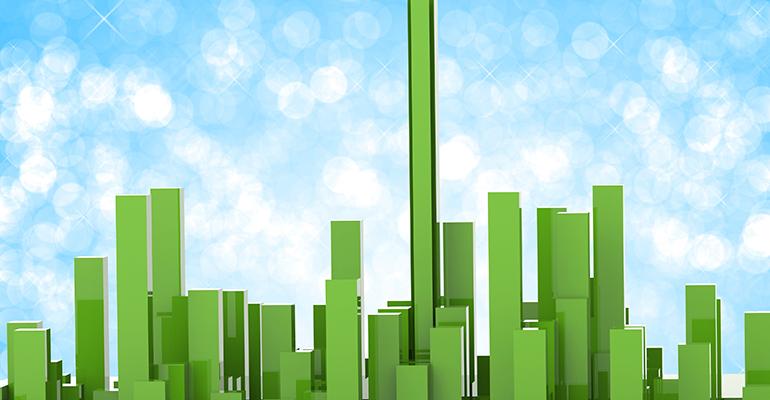 The Alternative Facts About the Greening of Existing Buildings

I know what you’re thinking—existing buildings are giant energy hogs and a major cause of climate change.

The greening of existing buildings is all about the other kind of green: money.

Real estate is a hot topic at the moment, thanks to a certain real estate tycoon who recently swapped his gold house for a very important white one. While some may yet debate climate change’s existence, making money off sound real estate investments is still viewed as smart, safe and trendy. And the easiest way to make real estate more valuable? By greening existing buildings.

The bottom line has always shown that saving resources saves money and adds value to real estate investments. The January 2017 working paper “On the Value of Environmental Certification in the Commercial Real Estate Market,” by well-known researchers Rogier Holtermans and Nils Kok, looked at over 25,000 commercial properties in the seven largest U.S. markets and concluded that rental, occupancy and pricing levels of environmentally-certified buildings remain significantly higher than non-certified buildings.

There are 5.6 million existing buildings in the United States. If a mere 10 percent of these buildings each saved $10,000 per year in operations, there would be more than $5 billion in savings for real estate investors and asset values could increase by $50 million. Even climate change deniers would take a second look at those numbers. Financial institutions might even start to see that the ‘ugly duckling’ can provide a serious source of future profits!

So how can an existing building save $10,000 a year in operations? In the past, popular green building programs have primarily targeted the top 10 percent of class-A buildings—those landmark buildings that have the big budgets to satisfy market demand to be “green.” The smaller and usually less prominent class-B and -C buildings also have much to gain, if not more. These types of buildings have not engaged with U.S. green building programs because of high costs and difficult prerequisites. They’ve had to make do with what’s available for free, such as Energy Star that only deals with energy.

Green building rating systems that make it easy and affordable for all types of buildings, regardless of size, age and condition, to at least benchmark operations should be highly sought after in today’s business climate. No real estate deal is ever undertaken without background data on the physical asset being prepared, reviewed, dissected and investigated. The days of buying a building on a handshake are long gone. Condition reports, market positions and value are all part of the pre-package. Yet the operational expenses and the potential to reduce them are often overlooked.

A 2012 study by Deutsche Bank and the Rockefeller Institute identified that if $279 billion was invested in upgrading energy-consuming equipment in the U.S., the building sector could yield more than $1 trillion of energy savings in 10 years. This would result in not only a savings of 30 percent of the annual electricity spent in the U.S., but also create more than 3.3 million cumulative job-years of employment from all the retrofits.

It certainly feels like things are heating up. Perhaps we need more alternative facts to clarify the position?

Barry Giles serves as CEO of BRE America, the partnership between the BRE Group and BuildingWise, a LEED certification consultancy.