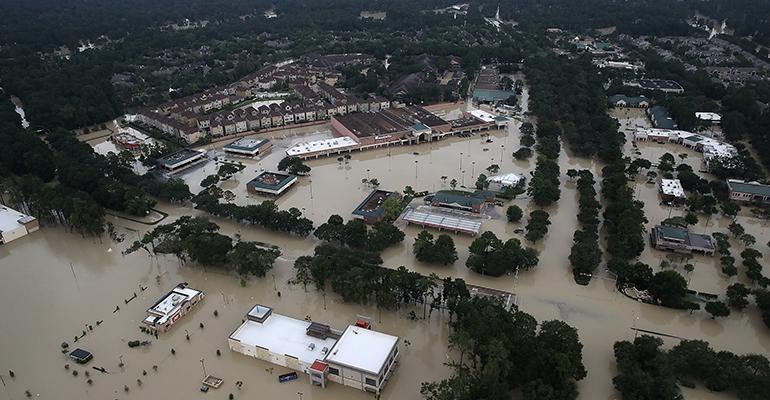 Assessing the Damage from Hurricane Season

Rebuilding after this season's massive hurricanes will likely cause building costs to skyrocket nationwide due to increased demand for building materials and skilled labor.

Hurricane Harvey devastated the Houston area, and Irma destroyed homes and businesses across Florida, as well as damaged properties throughout the Southeast with high winds and flooding that reached all the way to the Carolinas. Category 5 hurricane Maria is currently on the way to Puerto Rico and the Virgin Islands, with a potential to wreck further havoc after Harvey, and a less powerful hurricane Jose can cause coastal flooding in the Northeast.

While damage from Irma is still being assessed, Florida’s Office of Insurance Regulation has reported that through Sunday, claims totaling approximately $2 billion have already been filed, including 9,945 claims by commercial property owners.

Estimates of property damage in Texas, including those from Moody’s, JP Morgan, Enki Research and Goldman Sachs, vary from $30 billion to $75 billion.

Rebuilding after both Harvey and Irma will likely cause building costs to skyrocket nationwide due to increased demand for building materials and skilled labor, says Doug Wilson, chairman and CEO of San Diego-based Douglas Wilson Co., a commercial real estate development and advisory firm that operates a problem resolution and fiduciary services division. Hurricane-affected areas are considered a priority by both the Federal Emergency Management Agency (FEMA) and labor unions, so skilled workers from around the country are likely to end up working in Texas and Florida, which will increase labor shortages elsewhere, he notes.

On the bright side, the majority of Houston’s industrial and office buildings weathered the storm fairly well, according to sources from commercial real estate services firm CBRE and JLL.

FEMA reported few “major damaged” or “destroyed” properties in Houston’s largest industrial clusters, which are located in the inner Northwest and inner North/Northeast sectors of the city, according to CBRE Houston Director of Research Robert Camp.

Moody’s Analytics estimates a property value loss of 6 percent to 8 percentin Houston’s industrial sector, or $2.6 billion, based on analysis and comparison to similar previous occurrences.

“The damage likely is greater within older properties, and those located near Houston’s bayous,” says Camp.  As a result, “The Houston industrial market is expected to see increased demand for space from building supply companies, home furnishing suppliers and charities participating in the metro area’s rebuilding and recovery effort.”

Higher gas prices, store closings and flood damage costs are likely to depress retail consumer spending in the near term, including e-commerce retail, which drives demand for warehouse and distribution space, notes Camp. But flood damage to homes should cause an uptick in sales of home improvement items and household goods, making up for some of that lost demand. Auto sales are also expected to increase dramatically, Camps says, noting that possiblya million cars were destroyed by floodwaters in the Houston area.

Office landlords in Houston reported that 49 buildings sustained hurricane damage, which ranged from roof leaks to flooded basements, among other things, according to Camp. Most of the office product affected by flooding is located west and northwest of Houston’s central business district, including West Houston and the Allen Parkway, West Loop/Galleria and FM 1960/Highway 249 areas. These submarkets comprise 74.6 million sq. ft. of office space, which represents 35 percent of Houston’s total office market.

By the middle of last week, however,only 30 buildings remained closed.

“Our office market is composed of well-positioned, quality constructed buildings, and most companies are back on-line or will be back to full operations very shortly,”says Houston JLL President Dan Bellow.

“We manage approximately 10 office buildings and close to 40 industrial buildings in the Houston area,” adds Peyton Collins, JLL’s Houston managing director for property management. “We had isolated flooding in one building, but otherwise we were fortunate to experience only slight impacts, such as minor leaks and temporary power outages in just a few of our buildings.”

Overall flood damage to Houston’s industrial and office properties wasn’t as extensive as it could have been because of changes made to the city’s bayous and drainage systems after tropical storm Allison in 2001, says Camp. He also notes that most new office development over the past 20 years has occurred along major transportation arteries, which tend to be located on higher ground.

Editor's Note: The name of CBRE's Director of Research and Analysis was misspelled in the original version of this article. The correct spelling of his name is Robert Kramp. The article has since been updated.
TAGS: News
0 comments
Hide comments
Related
Sponsored