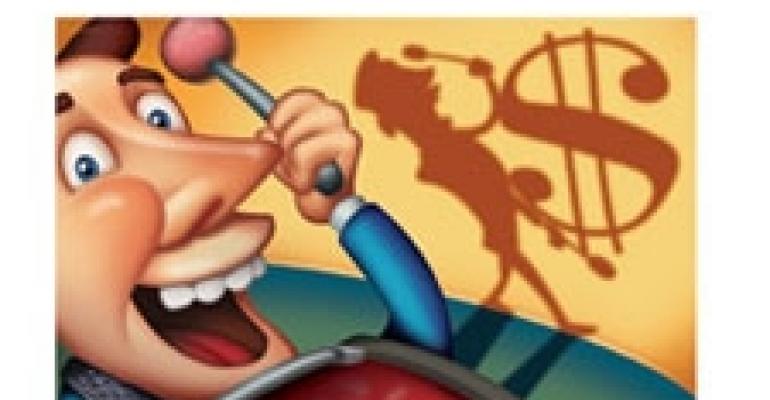 Fake snow is falling, harried shoppers are gobbling granola bars on the go and Santa and Mrs. Claus are already alight at malls, creating a blizzard of seasonal hoopla.

And, no, you're not crazy, it all started earlier than ever this year.

In light of a flurry of below-average sales forecasts for the holiday shopping season, mall marketing teams are doing everything they can to pack their properties with consumers early.

The first indication that this wouldn't be a normal year came, unsurprisingly, from Wal-Mart, which began cutting prices before the season began in earnest. On Sept. 30, the world's largest retailer — and largest seller of toys — in the U.S. announced plans to cut toy prices for the holiday season as it kicked off an aggressive campaign to boost sales.

Elsewhere, retailers like the Home Depot and Lowe's, among others, were double-loading seasonal aisles after the back-to-school season finished not just with Halloween-themed gear, but also with the first wave of Christmas trees, ornaments, lights and all other manner of tchotchkes. Indeed, weeks before Halloween, it seemed the holiday shopping season was already in full swing.

More people seem to be taking note this year, which has only been more disconcerting as unseasonably warm temperatures gripped the country for much of October. You can hardly turn on the television or read a newspaper and not see someone commenting on the early advent of the holiday season.

Indeed, the holiday shopping season that once spanned a tight 40 days from the day after Thanksgiving (traditionally known as Black Friday) through New Year's — factoring in post-Christmas sales and returns — has become more than twice as long.

In recent years the season's back end has grown, with the exploding popularity of gift cards creating a post-holiday sales rush that extends until Martin Luther King Jr. Day, nearly three weeks into January. And this year, it's grown at the other end. A National Retail Federation (NRF) survey of 7,837 consumers found that 40.3 percent of shoppers planned to start holiday shopping before Halloween. That means the holiday season, which accounts for between one-fourth and one-third of all retail sales, now will eat 25 percent of the calendar.

There is some consternation among mall marketing managers and other retailers as to how to manage the ever-expanding holiday shopping season. “It's walking a fine line between balancing the needs of your customers and alienating customers who don't want to see the holiday season begin too early,” says Scott Krugman, an NRF spokesman. “Overall, retailers have done a pretty good job of that over the last few years.”

Marketers are also wary of losing out on Halloween sales if they push consumers into the Christmas season too early. By ignoring that opportunity, “we would miss a significant opportunity for a large majority of our stores,” says Dawn Lecklikner, vice president of property management for specialty centers with Beachwood, Ohio-based Developers Diversified Realty Corp.

Regardless of when marketing managers begin the holiday push in earnest, one thing remains clear: with soft projections, malls' tactics for getting shoppers into their properties matter more now than they have in years. And some companies are pulling out all the stops.

Turn the lights on

At the “bigger is better” end of the spectrum, Forest City Enterprises Inc. is ratcheting up a large-scale light show that debuted last year at its lifestyle center in Denver, the Shops at Northfield Stapleton. The sprawling spectacle returns this year, and Forest City is rolling out a similar display at Chicago's Promenade Bolingbrook, which opened in April.

“Symphony in Lights,” according to Forest City, is the first and largest commercial holiday light show of its kind. At each property, 250,000 LEDs illuminating trees, snowflakes, wreaths and other holiday designs flash on and off in sync to the music of the Trans-Siberian Orchestra, an ensemble known for its electrified, over-the-top renditions of holiday tunes.

“Symphony in Lights” stretches over a quarter-mile of building facades in Denver. In Chicago, it centers on a 50-foot tree surrounded by 40 giant snowflakes.

“Each setting is different,” says Jane Lisy, Forest City's vice president of marketing. “You'll have the same sound, but a totally different look at the two places.”

The light shows inflate to a massive scale the vision of Carson Williams, whose smaller but equally intricate light show at his home in Mason, Ohio, became an Internet phenomenon and eventually graced a Miller Lite television spot. At the time, Lisy was looking for a holiday attraction that could withstand the lifestyle center's outdoor conditions as well as set the Shops apart from competitors in the Denver market.

Like many people, Lisy first saw Williams' computer-programmed attraction on YouTube. She then drove from Forest City's Cleveland headquarters to the artist's home to pitch a partnership.

“I think he honestly thought I was kidding him,” Lisy says. “I said, ‘Well, could you do this bigger — I mean, much bigger?’”

Forest City paired Williams with Parker 3D, a New York-based design firm that has created holiday décor and window displays for city department stores. Computers control the attraction's synchronization of light and music. And, to conserve costs, the display uses LEDs rather than traditional Christmas lights, which Lisy says is important to environmentally conscious shoppers.

Forest City found last year that Denver shoppers often took in one showing of the 15-minute event, then stayed for the next one an hour later. “It really has done what we hoped it would do — keep people at the center for the evening,” Lisy says.

And Williams remains an Internet sensation. Only this time Forest City's along for the ride, as Williams/Parker 3D Symphony in Lights presentations are all over YouTube.

At other newly opened properties, the holidays also serve as a time to get acquainted with shoppers — though perhaps with less flash than Forest City rolls out.

Shadow Lake Towne Center in Papillion, Neb., a joint venture of Kansas City-based RED Development LLC and Omaha, Neb.-based Lerner Co., will celebrate its first holiday season this year with ice carvings, a tree-lighting, performances by community bands and choirs and a coat drive in partnership with local charities.

The local musicians and festive décor are aimed at attracting new shoppers and making Shadow Lake into “something more than just a shopping center,” says Alicia Peters, marketing director for Shadow Lake. The center will also run a “Survivor Campaign” on Black Friday, distributing to the first 300 shoppers kits containing maps, coupons, promotional materials, bottles of water and granola bars.

At established centers, the holidays present an opportunity to give shoppers the comfort of tradition. In Arizona, where daytime temperatures during the holidays hover in the 70s, Westcor centers in Scottsdale and Tucson will shower their surroundings with a soapy snow substitute that dissolves on contact.

“It feels like you're in a small-town environment, and you've got this beautiful snow falling,” says Sherry Decovich, regional vice president of marketing for Santa Monica, Calif.-based Macerich. Meanwhile, it will host a store-window decorating contest at Biltmore Fashion Park in Phoenix.

Shoppers can expect to encounter the usual complement of carts, kiosks and specialty retailers this year, though the holidays have become less central to these businesses than in previous years. Holiday sales once made up about 80 percent of business for specialty retailers, but that has fallen closer to 60 percent, says Patricia Norins, publisher of Specialty Retail Report.

Norins says specialty retailers may feel less pinched by threats of competition and a soft economy. Because carts and kiosks sell unique products unavailable elsewhere in malls, they are less pressured to cut prices.

“It doesn't matter whether it's $2 or $5, if it's not sold anywhere else in the mall,” Norins says. Only about half of the merchants in a recent Specialty Retail focus group said they plan to discount their wares.

In addition, many of their products sell for under $100, which boosts their appeal to impulse buyers and customers looking for stocking stuffers. “If you look at the last 20 years of the industry, when the economy doesn't do as well, carts and kiosks actually can do better,” says Norins.

The firm also aims to capitalize on parking space by leasing to tree and wreath vendors. Hickory Farms will move a small building into a lot at one of the firm's centers.

Along with specialty retail, gift cards are expected to hold steady or even grow in popularity. The NRF study, for example, found that more than half of consumers that responded said they would like to receive a gift card as a holiday present.

A gift card was once seen as the refuge of the last-minute shopper, Lecklikner says, but “now it doesn't have the same stigma.” Lecklikner expects Developers Diversified properties will continue selling more gift cards this season.

In Arizona, Westcor's Decovich foresees an 8 percent increase in sales of the Macerich subsidiary's Visa-based gift cards. At Kierland Commons in Phoenix, customers can even pull up to the curb across from the center's management office and buy gift cards from their cars.

Several executives remain optimistic about holiday sales despite the forecasts of modest growth. Amid financial worries, holidays can become even more important, says Forest City's Lisy. “People want to put some joy into their lives,” she says, “and they don't want to give up the special gift-giving season.”