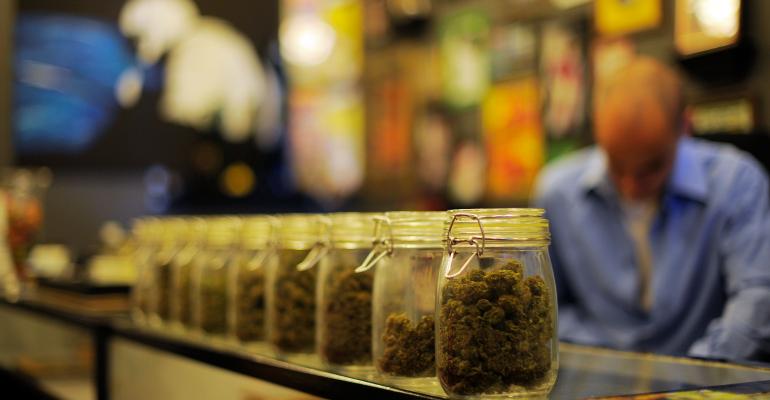 The split between state and federal laws doesn't make it easy for CPMs to deal with marijuana-based businesses.

The May/June issue of the Journal of Property Management was themed “Risky Business,” an appropriate placement for writer Joseph Dobrian’s cautionary report on the challenges of harboring a legal marijuana emporium in your property.

He tells the tale of Robert S. Griswold, CPM, and his three years of agita-inducing struggles with a medical marijuana store in a West Hollywood, Calif. property he managed. I won’t reveal the ending, no spoiler alert here. But I urge you to read the article to see the tightrope walk each and every one of us must make trafficking (you should excuse the wording) in a business that is approved in certain states, but is banned across the board by the federal government.

According to IREM’s government affairs director, Ted Thurn, and legislative liaison Megan Booth, with whom I had a recent discussion on the subject, some 29 states have given the thumbs up on medical marijuana sales; only three have okayed the drug for recreational use.

In fact, my home state of Nevada is among those that sanction the drug, and its economic impact cannot be denied. In the first six months after legalization, marijuana generated $30 million in tax revenue, well ahead of projections.

But that doesn’t make the split between state and federal laws any easier for CPMs here and elsewhere to deal with, and for a number of reasons.

Not the least of these is the fact that marijuana is an all-cash business. Credit cards and bank accounts are federally controlled, so the business is cash-and-carry, which has serious implications for rent payments.

“How will those businesses pay rent?” Booth asks. Given cash caps on real estate transactions, managers risk running afoul of federal money-laundering laws. Not to mention the increased crime risk of businesses locally known as cash-based.

You can also run into the dual risks of providers who sell it across state lines or sell pot to minors. Either can put a well-meaning manager in serious hot water. Even on the homegrown recreational side, there are traps, Booth tells me. These include mold (since it is typically grown in tight spaces), and an exorbitant drain on building resources because, as she says, “one plant takes a gallon of water and 18 hours of light a day.” In addition, many of the risks associated with secondhand tobacco smoke apply as well to marijuana.

But change seems to be coming that, for better or worse, would eventually end the split decision and cure the above-mentioned agita. Not surprisingly, Congress—in an apparently perennial haze of its own—has waffled on the issue. According to Booth, the Obama administration sent out memos to state attorneys general spelling out targets for prosecution. “It was clear in those memos that they were going after illegal distributors, sellers to minors and across state lines; not state-licensed manufacturers,” she says.

Fast-forward to the current administration. President Trump has voiced his support for relaxation of some of the laws, although Attorney General Jeff Sessions “has a long history of being vehemently opposed to legalization.”

That aside, Booth notes that she has seen a growing change in attitude on the Hill as a number of congress members—no matter the side of the aisle or their age—draft legislation that would ease or eliminate restrictions on sale and use.

“None of these bills have gotten to the president’s desk,” she tells me, “but the amount of support has been growing every year. Within five years there will be some nexis between fed and state.”

That, however, does little to provide current guidance through the thorny thicket that exists for property managers. So our legislative liaison provides it for us:

“Property owners have to be very well aware of the laws,” she says. “On one hand, you need lease provisions that specify exactly what you will and won’t allow. For example, if you’re a non-smoking building, you may need to make it clear that that includes any substance. If you have something in your lease about illegal drug use, you may have to specify federally prohibited substances.”

Tenants coming to you with requests for reasonable accommodation are another consideration, especially if it comes from, let’s say, a veteran needing marijuana treatment. On the one hand, that’s an ADA issue. On the other, ADA is a federal law.

“As all property owners know,” Booth says, “landlord-tenant law is controlled at the state and local level. So it ultimately depends on the disposition of local judges. You could have a conflict when you deny someone accommodation and the state says they should receive it. Know how your local courts treat the issue.”

And keep in mind that, in the case of a non-smoking building, there are other forms of the substance, such as tinctures and oils, that could serve that tenant just as well.

If Megan Booth’s five-year prediction is right, there are months of hassle, questions and opportunities ahead for managers to inadvertently cross the legal line. She and Thurn advise CPMs to arm themselves with knowledge. Know the laws, both fededral and state, and the local courts’ behavior on the subject. And ultimately trust your own informed judgment.

Ironically, this issue of people getting high demands a clear head on the part of savvy business people.

Don Wilkerson is 2018/2019 president of the Institute of Real Estate Management. In addition, he serves as president and CEO of Gaston and Wilkerson Management, based in Reno, Nev.