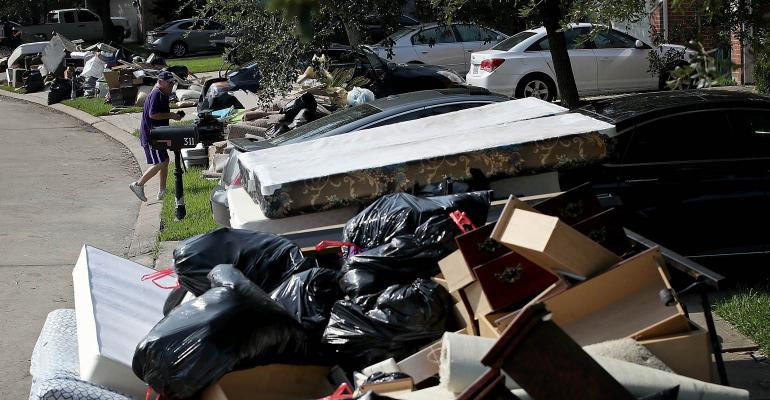 What Can Texas CRE Owners Expect as the Insurance Claims Process Gets Underway?

Despite the extent of the damage, it appears that there have not been major complications to starting the claims process for commercial entities.

It’s been nearly three weeks since Hurricane Harvey made landfall in Rockport, which lies along the southeastern coast of Texas. While emergency response efforts in the wake of the massive storm, which dumped a record-setting 51 inches of rain on the region, may be winding down, the insurance process for commercial and residential property owners is just getting under way.

The question yet to be definitively answered is: Just how much damage did the storm inflict on the region’s real estate, and how much will insurance cover the claims?

The picture is far from clear. Most of the damage Harvey unleashed was on single-family homes, according to a white paper by research firm Reis. Across the region, an estimated 200,000 homes were damaged, and about five in six do not have flood insurance, which could result in a $150 billion to $180 billion of estimated economic impact, according to a report by brokerage firm Marcus & Millichap. This will boost demand for apartments in the area, but as many as one out of six—or 100,000—multifamily units were flooded during the storm, according to a report from real estate services firm CBRE. The demand may cause rents to rise by as much as 10 percent, Reis forecasts.

When it comes to office, industrial and retail properties, it is still uncertain how many assets were affected. Marcus & Millichap researchers estimate that nearly 38 percent of the Houston metro’s commercial real estate may have been impacted. As for the city itself, Houston’s office buildings did not bear the worst of the flooding: only 40 of the city’s 1,200 office buildings had damage, reports CBRE. Industrial properties were not as hard-hit as other types of buildings, and could see a lift as the demand for construction staging areas grows in the recovery process, according to CBRE.

“I think that the level of physical damage to the commercial segment was not as extensive as some as feared, particularly the office segment,” says Spencer Levy, head of Americas research at CBRE. There was somewhat of a glut of sublet office space in Houston before the storm. The damage that did affect office properties might lead to some of the sublet space being taken off the market, he adds.

For about 60 or 70 clients of his firm’s clients in the Houston region, there are around 200 claims—many of those connected to multifamily properties, strip shopping centers and schools, says Brian Dove, Dallas-based national real estate practice leader at USI Insurance Services. “Every type of entity was impacted,” Dove notes.

While many businesses likely had appropriate coverage to protect themselves from storm events, it is likely that not everyone did, especially given the magnitude of Harvey, Dove says. “You don’t think you’re going to get 50 inches of rain.”

The damage from the storm was unlike what the region had previously experienced, says Mark Hanna, spokesperson for the Insurance Council of Texas, which represents 400 insurance companies in the state. Floodwaters, which left properties sitting in water for several days to a week, were not the only source of damage. There was also wind damage along the coast, leading to a lot of strewn debris and fallen power lines, Hanna says. That’s why it remains difficult to put a dollar loss on the total damage suffered by the region: “We just know it’s going to be high for insured losses and for the uninsured,” Hanna says.

Despite the extent of the damage, it appears that there have not been major complications to starting the claims process, especially for commercial entities, says Albert Betts, executive director for the council. In fact, the majority of the questions the council is fielding stem from homeowners who did not have flood insurance, Betts notes. There already has been a lot of money dispersed, particularly from the Federal Emergency Management Agency, in addition to some insurance policies already providing funds, Hanna says. However, one aspect the council is watching closely is the availability of insurance adjusters—many are headed to Florida following Hurricane Irma.

Given the strength of the storm, one surprise commercial property owners may face as they tackle the claims process is that they have a higher deductible, Dove notes. Once a storm is named, a percentage deductible applies against the values of the properties hit by the storm. Typically, in Houston there is a 1 to 2 percent deductible for named storms, Dove says. If it were an unnamed rain event, a standard deductible would apply.

Businesses affected by Harvey may also not realize that policies often provide coverage for mandatory evacuations ordered by civil authorities, forcing a business to close, which could help industrial and retail sectors, Dove says. Another area of relief for business owners may be from an inability to physically access operations because of floodwater, which will affect primarily industrial, retail and hospitality properties, he says. “Those are a couple of the areas where you might find some additional coverage from a business-interruption perspective,” Dove says.

One common pitfall that can occur during the claims process is when property owners do not adequately and meticulously document and record all the damage their business and their assets have sustained. This requires taking photos and providing strict records of the damage, as well as counting every penny that is used to make repairs, Dove notes.

There is also the possibility of disputes between tenants and landlords over who bears responsibility for certain aspects of the recovery, says Susan Golden, a New York partner at the Washington, D.C.-based law firm Venable LLP. Or, there could be issues between owners, tenants and insurers over what is going to be covered. If a lease doesn’t have specific provisions on how rents will be dealt with after a catastrophe, that could spell trouble, Golden notes: “The tenant may have an obligation to continue paying rent, even though they have no expectation to get back into the space any time soon.”

Meanwhile, there is no clear time frame for how fast claims will be processed, says Betts. However, it is clear the region suffered a massive loss, and the progress of the insurance process will depend a lot on the nature of the claims, questions about coverage and the possibility of disputes, he notes.

“I think it’s probably going as well as you could hope for at this point,” Betts says.

Editor's Note: The third to last paragraph of the story initially stated that Venable LLP, the law firm Susan Golden works for, is based in New York. Venable is in fact headquartered in Washington, D.C., while Golden is based in its New York office.
TAGS: News
0 comments
Hide comments
Related
Sponsored