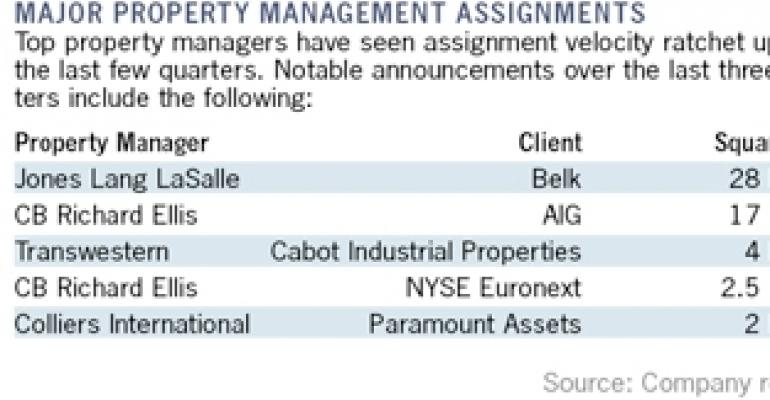 Thirty months after the official end of the Great Recession, property managers are jostling for a flurry of new assignments amid reviving commercial real estate investment sales, an uptick in mergers and acquisitions, and uncertainty surrounding the fate of beleaguered Grubb & Ellis Co.

Thus, while property managers didn't have to defend their jobs very often during the recession, Arce says, few new assignments outside of the distressed arena were available. Now property managers are whipping up proposals to secure new business.

“We're ten times busier than we have been in at least four or five years,” confirms Mike Kent, president of real estate management services at Seattle-based Colliers International.

Commercial property sales grew to nearly $125 billion in 2010, according to New York-based Real Capital Analytics, which tracks transactions $5 million and above.

While that pales in comparison to the $513 billion in sales during the market's peak in 2007, it still bested the $54 billion worth of deals in 2009. Through April of this year, $39 billion in properties have traded hands.

Beyond the opportunities created by investment sales, deal activity such as the merger of industrial stalwarts San Francisco-based AMB Property Corp. and ProLogis also is putting some real estate in play, observers say.

ProLogis has traditionally managed its own properties, but now the combined company is looking for outside providers in markets where it lacks critical mass, such as Austin and Phoenix, says Kent.

The potential for new assignments within the distressed asset arena has increased markedly as some lenders are losing patience when negotiating a resolution with delinquent borrowers, says Marla Maloney, senior managing director and principal of St. Louis-based Cassidy Turley.

“In the last 60 days, we've seen more aggressiveness in that lenders are starting to pull the plug,” she adds. “That's opening opportunities.”

Meanwhile, the troubles surrounding Grubb & Ellis have created a significant amount of movement and opportunities in the industry.

The Santa Ana, Calif.-based brokerage and investment management firm is exploring a possible sale amid a struggle to become profitable. Grubb & Ellis lost $68.8 million in 2010 and $78.8 million in 2009.

The assignment, which had previously belonged to Grubb & Ellis, increases Transwestern's property management footprint in Florida to 15.8 million sq. ft.

Transwestern has seen its property management portfolio expand substantially since the downturn. In 2009, RREEF hired the company to watch over 47 million sq. ft. of office and industrial properties in the Mid-Atlantic, Southeast and Southwest.

At that time many owners began to focus more intently on operations rather than acquisitions, says Walter Byrd, a managing director in the company's South Florida office.

But even though investment sales are picking up, landlords remain focused on protecting net operating income given the difficulty in boosting rents.

“The pressure on institutional owners to operate these facilities has not lessened, even though we've come out of the recession,” he says. “So, there's a focus on strong property management teams.”

Top property managers have seen assignment velocity ratchet up over the last few quarters. Notable announcements over the last three quarters include the following: